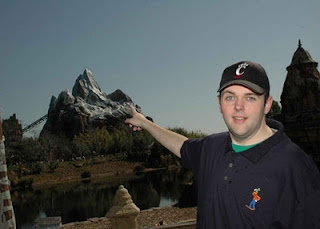 So I had a whole bit written out about my Day 2 at Disney, and I hated the whole fucking thing. This is not an excuse for the delay in blog postings, but rather an explanation of how I spared you guys from the most boring blog ever.

So anyway... I suppose my theme for Day 2 could be either of two different things...

Let's just say that I might be getting too efficient. I got through Animal Kingdom in 4 hours. The whole park. The day was almost devoid of wait time altogether. I start to wonder if perhaps a wait line occasionally isn't such a bad thing. Maybe there's gotta be time to breathe or something. Maybe the idea I should shoot for is a plan that gets you through the park with efficiency, but also sort of builds in some waiting... something to fit the day. I've basically reduced the Animal Kingdom into a pleasant morning/afternoon, and that almost does a disservice to the park, which is beautiful and has some really awesome queue lines (which... I realize are still just queue lines, but still.) And so I'm saying that yes... I'm a master planner, but maybe too good.

I don't know exactly why, but I almost always start my Disney trips with Animal Kingdom. I think that, at least in part, the reason is that I always feel like my time at Disney is at a premium, and when the first day doubles as a travel day I want to save my FULL days for parks that take full days. The reason doesn't really matter. It's come to be a tradition, and for some reason I get more emotional (shut it!) when I get to Animal Kingdom. This trip was no different. I started with Animal Kingdom and I got emotional and I felt like I was coming home.

Here are some of the lasting images of the day...

1) Each of the Disney parks has a sort of "Welcome to the Park" thing they do when the park opens that sort of revs the people up (like they need to be revved up... they're at DISNEY for fucks sake!). Well... I'd actually never seen the Animal Kingdom one before. Usually I have a flight that morning or something like that. Well... The Animal Kingdom "Welcome" is now my favorite. There's something awesome about Mickey Mouse appearing on a Genie lift with cartoonishly large binoculars and safari gear over by the Tree of Life. Pluto and Minnie and Goofy were alllll ready for their Wild Adventure and they couldn't find Mickey. Turns out Mickey was already on the trail! HA! I loved it.

2) On my 2nd Expedition Everest ride of the day I was briefly in line with these weird young teens who had to have been straight from some sort of 60 Minutes report on Sex-ting or Middle School sex or something. The girls (there were 3) were a little more ready to party than made me comfortable. I ended up getting stuck in a train car with them (with the 3rd girl in fact). So while I'm in line with them, the one girl who sounded like she was talking in a made up stereotypical "hick voice" but wasn't turns to one of the boys and says:

It took me a minute to realize she was talking to me. I simply decided to agree with her, because even though she was no more than 14, she scared the shit out of me. "Yep. You should hold hands. It's a roller coaster."

So the 2nd of the boys and the 2nd of the girls commence to holding hands. The main girl, was also with a boy, but I noticed she wasn't holding his hand. Maybe she was just too scary for him.

A little later on (keep in mind, that this was my longest wait of the day for any ride, and it was no more than 8 minutes) she's talking about the Twilight books and she simply says something so horrifying that I can barely repeat it... but I will...

3) The first ride I took was the Kilimanjaro Safari (another tradition, though this may change as part of my "re-organization to add more wait time" adjustments.) Annie of "Fend to Blog" has stated that she doesn't love Animal Kingdom in general, and specifically the Safari ride, because it's not that much different than the Cincinnati Zoo or something, and you know... basically I agree (aside from loving it, which I do.) Well... this was bar-none the best Safari I'd ever had. The lions were AWAKE! There was a giraffe that strolled across the path! It was awesome. The guide was good too, and he sort of minimized the utterly ridiculous Little Red storyline. To Disney's credit, it seems that they are slowly marginalizing that awful thing over the years, but this guy basically ignored "Wilson" the whole time. It was hilarious. Also did I mention the Lions were awake? Those fuckers are awesome.

4) Flights of Wonder is the only show at Animal Kingdom that I'd never seen, which is saying something because I've been to AK no less than 10 times or something, but I am kind of terrified of birds and I think they're gross and full of disease (which is totally true) so why would I want to watch a Live Bird Act? I've actually always felt that it seems a little small and provincial for Disney World. (Which is ridiculous, because Walt fucking LOVED the Tiki birds and that talking Abe Lincoln thing.) Anyway, I went to Flights of Wonder and it was really great. From someone who hates birds and believes they are gross and full of disease, that is high praise. High Praise! there was a parrot that sang Yankee Doodle! There were HUGE, terrifying birds that swooped over our heads and made me feel crazy and icky. It was disoncerting, but it's definitely being added to my list of "must-sees" when you are hot or tired or just wanna have some effing ice cream and relax for a minute (as was the case with me.)

5) It's Tough to be a Bug is still hilarious. I do think they could stand to re-do the thing maybe a little. There's never a line anymore, so I also think they could possibly make it a little longer... Still.. when you're there and there's the one part where Hopper shows up and the children in the audience get abso-fucking-lutely terrified and start crying. I kinda feel like Disney did that on purpose. They had to have, right? I mean.... that shit is intentionally scary and I have to believe that there are videos upon videos in some executive's office of children crying and screaming like crazy when Hopper pops up. Love that.

So really... I'm always so happy about being at Disney to begin with, and I think I'd have a hard time leading off with any park aside from the Animal Kingdom. It's easily the most laid back. It's easily the least crowded, even on the most crowded days. It's the most familiar. It's the perfect re-entry into the World for me. I'm not a fan of crowds and so I definitely need a good, fun park that slowly weens me back on to the Mouse Juice.

Since I've been back, I've been looking at blogs and rumor-mill type things and one of the subjects that seems to come up is that Disney is considering expanding AK to include an "Australia". I'm all for this. As long as there's another big ride attraction. There needs to be something else. Right now we're looking at 2.5 mega-rides at AK and that's not enough.

Still... it was a great start to my trip.

Also, I went to The Rainforest Cafe later that evening and had a Green Python in honor of my Cousin Abbey. It was delicious.
Posted by Beefy Muchacho at 11:59 PM

Email ThisBlogThis!Share to TwitterShare to FacebookShare to Pinterest
Labels: Disney, Disney World, I am Insane, traveling

See, if I had a cool safari where the animals were closer than zoo-level closeness it would definitely win me over. I will ride it but I will not wait for it.

I don't know, I think the faster you get through AK the better. There are so few things that really need to be seen there. I think if I had children or lived in a city without a zoo I might look around some more but I really have no need for Camp Minnie Mickey or whatever, etc. Its not as though you're rushing, as long as you still enjoy what you're doing, why not blast through it? More time for the meat of the World.

This is the exact hater-ade I was expecting from you.

First off... if you go first thing or last thing, there's no waiting for the safari anyway, so that point is null...

It's not a zoo. They make that very clear. No zoos you know of have Expedition Everest or Kali River Rapids (which I admit I've still never ridden) or Tough to be a Bug or Dinosaur!. That's why you go to that park. And as for Camp Minnie Mickey, I agree, but then Festival of the Lion King would have no-where to be, and that won't do.


Also, I agree that there's probably not enough to fill a day there, but I payed enough to wanna get more than 4 hours out of it, if I'm gonna go.

I know its not a zoo, that's exactly why I skip all of the things that make it just like a zoo. I'm not saying that AK should be skipped, but if you're only going to the non-zoo attractions, you'd have to really like those few things to spend a whole day there. I was just commenting that if I didn't have a membership to a zoo and thusly couldn't go and see those animals whenever I want, I'd probably want to spend a whole day there looking at the animal parts of it.

I don't hate AK, I like the rides there, I LOVE Everest. Plus with a park hopper I can comfortably do everything I want there and then get some extra MK! More bang for your buck if you ask me!

Man... now we're getting into a Trip Planning discussion, and perhaps that should be an entire podcast or something, because I don't see how you combine AK and MK, unless you do MK first, which isn't what you're suggesting.

I'd do AK and Epcot World Showcasey stuff in the same day, because you're basically replacing Future World in Epcot with the rides at AK in that scenario.

I was envisioning a 4-day trip where you get an extra half-day at the park of your choice. I usually do Epcot on Day 1 because its open later.

Yup. We officially need to podcast this debate.

Haha I don't even know how one creates a podcast.

By the way, if they're being shy about holding hands then I wouldn't worry about those kids. I mean, I talked about sex constantly when I was 12. I was absolutely boy crazy. I was even writing sex stories. But I sure wasn't doing any of it.