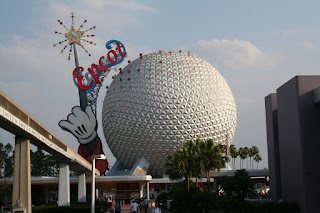 The time has come. Well maybe not THE time, but at least now I know when THE time is.

2 months from today I shall once again be basking in the beautiful glow of Walt Disney World. In fact... 2 months from this past Saturday. February 13th through February 16. It's going to be awesome!

Why those dates? Disney in their infinite awesomeness has decided to grant us the greatest gift any person could ask for. Free Admission on your birthday. I know... I know... it's too good to be true. I thought so too, but I've looked around and done my research and it would seem that it's real. On February 16, 2009 I will be entering a Disney Park FREE OF CHARGE. It's one of my greatest dreams. I'm not kidding.

On which park should I use my free birthday admission?

The arguments for each are as follows:

The Magic Kingdom: Mostly this would be symbolic. It's the flagship park. It was the purest of Walt's visions (well... EPCOT was probably his pet, but Magic Kingdom started it all.). Also, since the birthday pass can't be used as a park-hopper, it's logical to use it at one of the parks that can literally take a whole day to enjoy.

Epcot: Probably my favorite of the parks, if pressed. It's the other park that can take a whole day.

Animal Kingdom: Not really an option, as I see it. I love it just as I love the others, but it seems like a waste for my birthday pass.

Anyone have thoughts on that?

The other option is that I don't use it for entry, but rather I get a "Birthday Fun Card" which is good for merchandise and whatnot in the parks in an amount similar to a park admission. That appeals to me for sure.

There are so many decisions left to be made. I'm staying at The Pop Century. It'll be the first time I've stayed on property since January of 2005 (4 trips ago) and it'd even been a while before that. I'm interested to see what this one is like.

Oh... and despite my free flights, I'm gonna drive. It sounds crazy, but flying standby is a great benefit if you don't have places to be, but I'm not risking a minute of my Disney time with flight issues. And I'd have to rent a car there anyway, so the cost isn't much different.

More to come on this...and maybe when I'm not working or packing I'll write about "Bolt".
Posted by Beefy Muchacho at 12:12 AM

Email ThisBlogThis!Share to TwitterShare to FacebookShare to Pinterest
Labels: Disney, Disney World, I am Insane, traveling

Gregg.... you've inspired me to write a blog about that very thing.

The short answer is... You're right. I should.