Remember me? Well... I'm sorry to have been so quiet all these many weeks (I know how hard it must have been for everyone.)

Here are some of the things I did, some of which have inspired me to think about blogging.

-- I opened and closed another show. This one went really, really well. The audiences seemed to really love it. The cast was fantastic to work with. My dad directed the show, which is a rare treat for me. The Tofu Muchacha ushered many a night. It was an excellent time.

-- My sister's 21st birthday present from my parents was a trip to Las Vegas. I tagged along. For a week. Maybe a week is too long. I'll be discussing this and other Vegas topics in a Vegas blog coming soon. Maybe even tomorrow. We'll see.

-- I started another show. This one is a classic... Romeo and Juliet. I'm playing Lord Capulet... Yes, I'm a little young, I suppose, but since it's a love story about 13 year olds getting married, I'm pretty sure my ripe-old-age of 29 isn't really that insane. What is insane is my complete and utter disregard for the fact that I really need to learn my effing lines. Like... whoa. 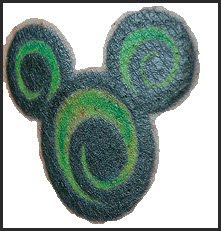 So you at least get the idea. It was basically just Mickey...floating there. I ripped this picture from a picture you'll see later, so it's not taken straight on, so don't worry; the Mickey is symmetrical.

I just felt like it was too lonely..too floating in the middle of nowhere. I wanted to give it context. So I started thinking about how I'd fix it up. You know...fancy it up a bit. Give it some class.

I got the initial tattoo in May of 2006 and in the span of this last 3 years I've grown to truly admire Walt Disney, so I knew I wanted to honor him in some way in the update. I thought about his birthday, but that's dumb. I thought about going crazy fancy with like a silhouette of Walt himself all looming over the mouse, but that would be expensive and sounds better in my head than it could ever be in real life. I settled, after a while on his initials in that classic Disney script. It took me a while to find the font, but here it is:

I also wanted to sort of frame it up and give it some texture. I had it in my head that I just wanted sort of a simple antiqued metal look. Like wrought iron. Kinda like this: 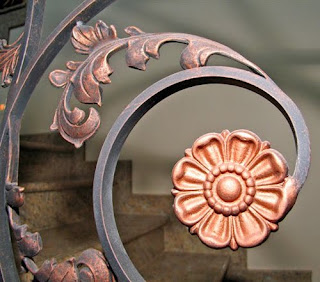 Not the big flower, but that leaf really appeals to me. I love the texture and coloration of it, and I felt it would nicely incorporate into the green and black too.

So I came up with a general design that I gave to the artist so that he knew kinda the shape and general idea of what I was looking for: 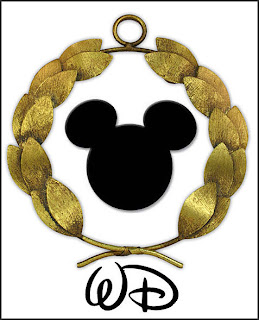 I didn't really like the leaves in this one, or how it connected at the top, but it got the idea of it across pretty well...

After talking it over with him, and looking at pictures, and after an hour of work on my leg, we came to this: 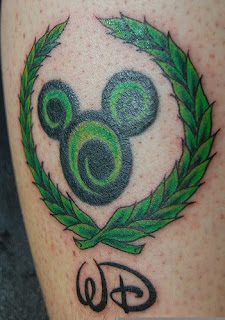 Pretty fantastic, no? I'm super pleased with how it came out. The guy that did it, Jake Lewis (of Queen City Tattoos in Milford, OH) is an exceptionally talented guy. He did my fish tattoo last year too. I highly recommend him for any of your tattooing needs.

Here are some further pictures of the process, for your enjoyment. 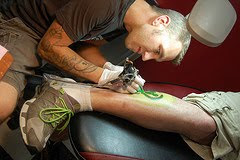 Jake working on the leg. 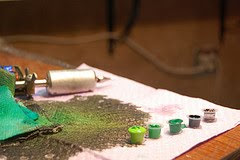 The Collection of Inks. 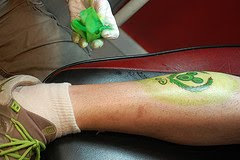 Jake wiping the excess ink away. 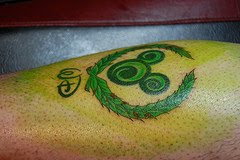 My bloody, not yet wiped, completed tattoo.

P.S.: A special prize for the person who can guess where the leaves came from...

Posted by Beefy Muchacho at 1:28 PM

Cool! I like it a lot! The initials were a good choice. No clue where the leaves are from. Hmm...

Now I want another Disney tattoo! I wish there was a place in Disney. How cool would that be? They need to get with the times, man.

Is this satisfactory? Talk about shameless self-promotion and being a comment whore... :)