We Can't Have Anything Nice 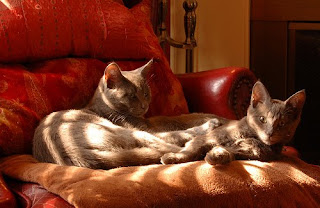 One year ago this past Sunday, the Tofu Muchacha and I brought home our boys. The kittens known as Walt and Roy.

They are exceptional cats, and I just wanted to dedicate a blog to the anniversary of their homecoming.

Here's what they looked like the day we got them... 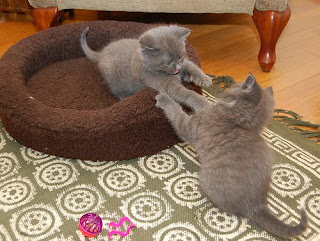 Yep... Pretty effin' cute, right? They were definitely cute. They also were complete demons, and they commenced in ruining everything we owned. We got Walt and Roy (Named for the famous, Disney brothers) from a farm lady we found on Craigslist. They were free. At least at the time. Of course, having been born in an uncontrolled environment, they were chock-full-o-diseases. And worms. And parasites. And everything else that could be wrong with a kitten that wasn't fatal. I'm pretty sure we spent about 700 dollars for each kitten over the course of the first 2 months we had them. SO... free? Not so much.

They started messing things up as soon as we had them. As we drove them home, they were "free-range" in the car. And then Walter decided to start pooping right on the TM's lap. Good thing we had a plastic bag handy. I'll never be able to erase the sight and smell of the TM holding a pooping Walter over a plastic bag as I had my head hanging out the window on North Bend Rd. What horrors. Little did I know that the sight and stink of wet cat poop would become so prevalent in our lives. 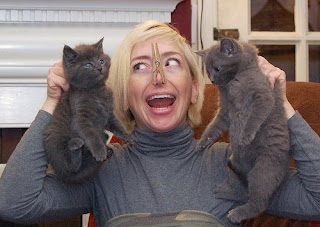 Right after we got the kittens, we had our new couch delivered. I put the couch together, and 3 days later, we'd already had the cushion peed on twice. We tried everything. Cayenne pepper. Aluminum foil. Citrus peel. That fucking couch looked like some sort of Mediterranean stir fry. It was ridiculous. Did it make a difference? No. Cat pee became a large part of our day. Then they pooped on the couch and we sent the cushions off to the dry cleaners. Even the pros weren't able to make it right.

The nightmares didn't end there. Starting in the early Spring, we started letting the kittens sleep with us. That is, until little Roy started peeing on the bed. It happened fairly regularly, and that, my friends, wasn't fun. One time we caught him and he just kept on peeing in the TMs hands as she quickly carried him downstairs. We are pretty sure he was troubled.

Of course, the only trouble was that we were now being forced to sleep on rubber sheets. Like WE were the bed wetters. I'm still convinced Roy (Nicknamed "Sir Pees-A-Lot" by the TM) did it just to see the steps we'd take to stop him.

I admit, though, that through all of it, I've grown to love these little guys. They are very smart. Roy plays fetch like a dog. You throw a little mousie toy, and he chases it and brings it back. Walter runs into the kitchen, flops on the floor, and waits for pats every time we come home. Walter is an absolute whore for the pats.

Roy doesn't give his love quite so quickly, but he's super sweet (on his terms). They both completely love the two older cats, and their presence has made the older cats stay lively. I believe that Zoro, especially, secretly enjoys the kittens, especially Roy who is a little runty, but tough as nails. He LOVES playing with toys... Oh... and he absolutely adores the TM. He follows her around constantly.

My favorite thing about them is how different they are, even though they're brothers from the same litter. Walter is a big, rugged boy. He's handsome and muscled and snuggly. He has "sad eyes". I like to compare him to Mufasa from the Lion King. He's the brother who would be the king (if Zoro wasn't already). Roy is smaller and thinner. He's got a sleekness to him. I think he's also smarter, and has the ability to plan, like one of those velociraptors from Jurassic Park. He's more like Scar.

I can be cranky sometimes, but spending some time with my kittens (who are definitely not so kittenlike anymore) always puts a smile on my face. 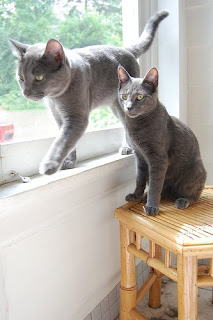 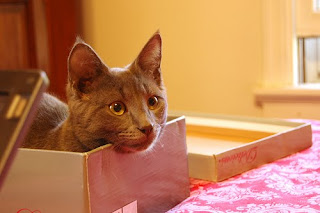 Roy in a shoebox 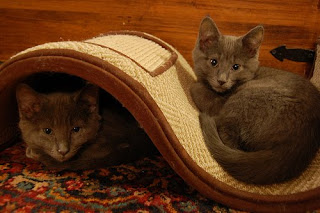 The boys share the S. Walt loves to be under and inside of things. He's on the left. 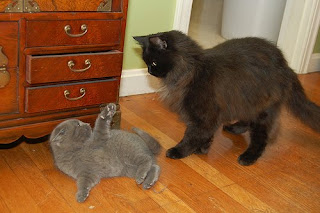 Kitten picking a fight with Sammie. I'm pretty sure this is Roy, but It's hard to tell. And yes... The kitten started it. 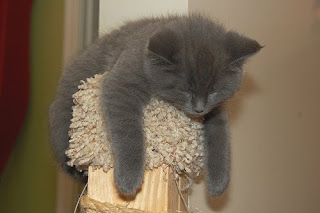 My all-time favorite kitten picture. Walt passed out asleep on top of the scratching post.
Posted by Beefy Muchacho at 7:24 PM

Do you remember Sparky?

Oh my. It's so nice that to know that my psychotic cat isn't the only one on the planet. I was beginning to think I was the psychotic one. =) But, I have to give it to you. My kitten has never peed or pooped on anything! I put her in the litter box one time and she has always gone there. Maybe it's a male cat thing. My bestie has two male cats, too, and they have peed on everything. Especially when they are mad or left alone for too long. I don't know. I've never owned a cat before so it's a trial by error thing for me. I guess that's kinda scary!

Daytime Night Owl- Thanks for stopping by! The "being left alone" thing is definitely real. Roy has separation anxiety.

ok i laughed ALOT about this. we cant have anything nice either.. but we have The Insane Cat Posse. You just have a couple, 3? Amateurs
;-)

thanks for the grins!

Thanks for commenting, everyone!

Caren- I do remember Flash. We got him in December of 1988, I believe. He was awesome.

OhioFarmGirl- We have 4 cats, and the TM keeps having dreams of getting more. Yikes.