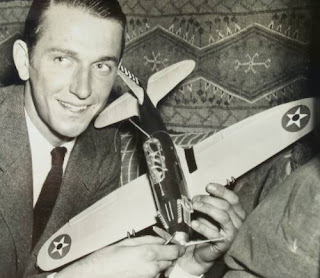 So for some reason I've really felt the urge to build a model airplane. I have no idea why. It's not something I ever spent much time doing as a kid. (Or any really). I just really wanted to do something sort of OCD and artistic and, also, I really am getting into aviation more and more. It's interesting, and certainly taking an interest in aviation can't hurt my job performance.

For some reason I've got this weird nostalgia for model building. This makes no sense at all, since I believe I ATTEMPTED to build one model of anything in my life. A 1967 Corvette, which was a great idea, but I was a dumbass and decided to paint first before assembling. This was stupid. And the thing never got assembled at all. I'm just not sure where all of this nostalgia comes from. I don't really even recall my dad talking about building models.

Aaaaanywhooo....a few weeks back I went into a hobby shop and looked at all of the model airplanes they had available. I really wanted a business jet, like a Gulfstream or a Lear product of some kind. Something that is directly applicable to my own job and life in aviation. I was disappointed to find that none seem to be available in this ilk at all.

Sure you have your fighter planes and air force jets and biplanes and things like that, but no business aircraft.

I looked online. Nothing. I looked at 2 other hobby stores. Nothing. I came to the conclusion that this just wasn't out there, so I ventured to the Boardwalk Hobby Shop in Mt. Lookout and after staring at the different options for a good 30 minutes, I decided that while I couldn't do business aviation models, I COULD do commercial passenger planes, which is the next closest thing to what I do. So... I picked out a cool looking vintage-y prop jet called a DC-6. In fact... here's the picture. 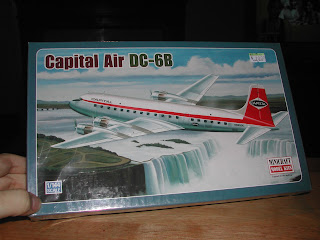 Now... Isn't there something oddly appealing about this box? Like... I don't know why this plane is flying so fucking low over that waterfall, but for some reason the packaging makes me feel comforted. Like this plane model has been sitting in the store for 35 years. I almost expected the directions to be littered with inappropriate, racist language and references to gas being 16 cents or something. It just feels vintage-y to me, and that's why I bought it. Also, I really like the brushed aluminum planes that used to fly around. I think they're neat.

I thought this would be a good foray into model building, as it doesn't seem overly ornate. A couple of days went by, until last night, when I had a chance to sit and build the model as I watched the Ohio State game. I bust open the box to find this: 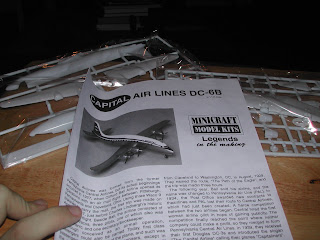 Now let me just tell you that this is rated as a level 2 model (I believe out of 5) and some of the pieces are fucking TINY. Like... I have literally no idea how these would be applied. I even used some fingernail scissors as makeshift tweezers to make up for my fat fingers, and it was fucking hard.

I can't say that I was overwhelmed, but there were definitely points where I thought... "God damnit. I hope this is over soon. If it's not, I may go insane." I felt like one of those movie serial killers who painstakingly catalog or track or do whatever.

I wish I had more of a story to tell. It was just hard. And not really that much fun. Maybe painting it will be more fun, though I don't know when that'll happen. I haven't purchased the paint yet. I did nearly lose one piece because it was a) super effing small and b) so firmly attached to the little white framing that I had to cut it out using the aforementioned scissors. This of course made it shoot through the air and land out of my line of vision. To the point where I spent 15 minutes crawling around on the ground in search of this little tiny piece of plastic only to discover it on the couch next to where I was sitting.

In any case, I think that for my first model I did a pretty fucking spectacular job (sans paint, of course). What do you think? 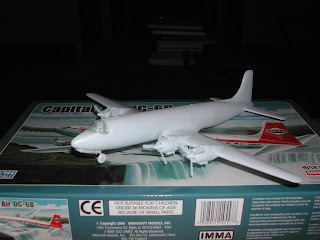 Email ThisBlogThis!Share to TwitterShare to FacebookShare to Pinterest
Labels: Arts and crafts, aviation, hobbies, I am the coolest

I, too, have always wanted to make a model for no apparent reason. I'm happy to be able to live vicariously!