I Saw "Eclipse" and it Dawned on Me. 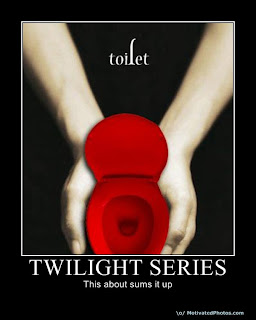 Quote of the day:
Beefy Muchacho: "I'm writing a blog about Eclipse"
Tofu Muchacha: "Is that the movie we just saw?"

What is it about vampires that compels us to write novels and shoot movies and sing songs about them?

When you think of vampire what do you think about? I think of blood. I think of seduction. I think of sex. I think of death. The great vampire stories are those that interweave the duality of vampires NEEDING the blood that keeps us alive to keep them dead. The stories that bring the characters to the knife’s edge between life and death and play with the eroticism that can only be found right on the tip of that blade. Vlad the Impaler became a vampire to avenge the death of his one true love. Elizabeth Bathory bathed in the blood of virgins to give the illusion of her own purity. It’s all about sex and blood, the givers of life. And the lack of blood and sex, the creators of death. Vampires are the literature’s deadest reminders of lifes' animal urges, and that’s what makes us read on.

And then came, charging into the lexicon, the Twilight Saga. So immensely popular. So pervasively in our faces at all times. I read all 4 books at once, in a straight line, and I was entertained. And I liked them. And I watched the first movie. And I liked it.

And then, perhaps incongruously, I thought.. “Wow… I never want to hear anything about these stories ever again.”

So, why did I suddenly get bored with something that should be decidedly not-boring?

Because Stephenie Meyer created the first book about vampires where their teeth were made of putty. She created these vampires with dazzlingly sparkling skin made of marble and eyes of amber, but with no life at all. She created stories told from the perspective at the one person whose point of view makes the vampires uninteresting. There’s no conflict or fear in Bella Swan. Not with the vampires, at least. She finds out that Edward is a vampire and instead of recoiling against her desires and finding the conflict there, she runs straight toward them. Instead of experiencing conflict between her disgust with the very nature of what it means to be a vampire and her urges for Edward, she just is all “yeah.. this is fucking awesome.”

The possible taboos of being violated by these two long pointy teeth and finding it both repulsive and pleasurable can’t be explored when the protagonist is essentially fucking begging for it from the first 100 pages of book number one.

And why shouldn’t she be? Edward is perfect. He’s in a clan of the only vampires in the world who can withstand the smell of human blood. He is the only 17 year old guy who, when faced with an adoring girlfriend that wants him to ravage her, is all “Aaaaactually…let’s wait until we’re married.” He’s got perfect skin, perfect ethics, perfect memory. He’s a genius. He writes her music. And despite what he claims, he doesn’t ever want to bite the girl and suck her blood.

Why would Bella want anything OTHER than being just like them. They don’t stink of death or die in the sunlight or dislike garlic. They turn into vampires and become creatures who are indestructible (except by another vampire or werewolf…don’t even get me started on the werewolves…), perfectly intelligent, kind, NOT thirsting for blood, immortal, and oh..did I mention also the physical embodiments of perfection. This happens after they get bitten.

Hell… I want to be THAT.

How fucking boring does it get?

Stephenie Meyer spends hundreds of pages building up to battles and confrontations. Thousands of words telling us how desperately all of these natural dead killers want Bella to join them in the ranks of the soul-free. Millions of breaths discussing how each of twenty five characters more powerful and interesting than her will break their own necks to defend her and her precious, clumsy honor.

Then…. When the time comes to see these battles and confrontations, Meyer keeps the action far, far away. In Eclipse, they spend all of this energy training and preparing for the battle with the Newborn Vampire (a concept that is ACTUALLY interesting), and when the battle finally comes, we hear about it like it’s on the fucking radio, while we sit with boring ass Bella and perfect Edward (whose family is so awesome they all put their lives on the line to protect his dumbass girlfriend who is all but throwing her neck at his teeth so she can be a vampire anyway. Why are they even fucking bothering? And if they are going to bother, why can’t Stephenie Meyer throw us a bone and show Emmett (The purported beast of a vampire) ripping the arms off a newborn. Or Jasper (easily the most compelling character in the entire series, simply because he actually has seen some shit go down) show that he’s a badass warrior for once instead of being this mental invalid because he actually wants and has urges for human blood… as is in his nature. Instead to hear about it all from a field far away from the action, where no danger exists.

I just don’t understand it.

I was talking about this with The Tofu Muchacha on the way home from the movie, and she contends that the books aren’t about the blood and the sex on purpose. It’s about the romance of the relationship between Bella and Edward. Well… the 17 year-old girl’s idea of romance, where the ideal is a shining, living statue of their own father figures, wrapped up in a tight-abbed little ball to pant at their doorsteps and watch them sleep, and tell them that they know what’s best for her, and have neutered little fights about here while she sleeps in their cumulative arms. It’s gross and weird, but in that light.. the lack of sex is actually comforting, because while the idea of holding hands and being protected by a father-boyfriend is nice, the idea of sex with him is icky and weird.

But honestly, if Meyer had pushed that a little more and confused Bella all to hell by having her sleep with her daddy-boyfriend… maybe the whole thing would have been more interesting. That’s the kind of fucked up, twisted sexual confusion that a good vampire story might have. But no…

Anyway… I’d been having a hard time putting my finger on exactly why I went from liking it to disliking it, and it’s because it doesn’t stick with me. There’s no real conflict. It’s told from the perspective of the least interesting and least self-possessed character. And I enjoyed the story… It’s just the completely bloodless telling that turns me off. I want to be titillated and grossed out and offended by a vampire story.

Don’t get me wrong… I’m not a psycho. I love a good biography. I like a really good adventure novel. I mysteries and zombie books and books of weight… it all depends on my mood. It’s just that when I’m in the mood for a vampire story, I don’t want to be bamboozled into reading a book about 2 angsty teens…

The most recent episode of True Blood ends with 2 vampires having violent sex born out of hatred and weird familial ties, and in his hate the male vampire literally twists the female vampire’s head clean around as her mouth drips with blood. It’s disgusting and weird and brutal and not at all tender in any way… And it was kind of awesome, because it was the kind of taboo that only an immortal couple of vampires can explore.

If only Edward had popped off Bella’s head like a dandelion in a fit of uncontrolled passion.
Posted by Beefy Muchacho at 9:51 PM

I think this fits perfectly as the theme song to your...theme here.

I have to say... That might be the greatest song I've ever heard.

Did you forget how beat up she is the morning after they finally have sex? Yuck.

I didn't forget. If I counted all of the weird, fetishy kinks portrayed throughout the books, I'd still be writing. It's all gross and abusive and stockholm syndromey and sick. How about the final thing she experiences as a human is Edward giving her an oral c-section. That's not some sort of fetishised violation or anything.

Ew, yuck. I had forgotten about that. Hah.

Someone asked Robert Pattinson if he thought Betty White could be in Breaking Dawn and he said, "Sure. She can play the baby."

Stephanie Meyer is Mormon and so her beliefs, i.e. abstinence until marriage, are portrayed in the book. Lev Grossman writes that Meyer's books are about the "eroticism of abstinence". I rather like that poetic description. In spite of some of the plot flaws I find these books well written. The series is about teens and written for teens, ergo, no sex. I get that. There are other vampire series written for teens that are also quite good but if you want one with sex then there are plenty of those too. I want to write an article to compare and contrast the vampire worlds in all these books (I read a lot of them). Maybe someday.

I definitely understand that Meyer is writing from a very specific moral perspective, and that all of her protagonists operate under the same morality (though without identifying that morality directly...)

I guess my feelings on that are that it then becomes more allegorical than anything, in which case I think she should choose a different genre than vampires.

I don't think there's anything inherantly wrong with the story or the writing, (though I do think it's clumsy), but my issue is her couching her sort of milquetoast morality story under the guise of being about vampires when her vampires aren't really vampires in any traditional way.

I'd love to read your comparative survey of vampire worlds, whenever that comes to fruition.

PS: I've heard The Society of S is a good series.