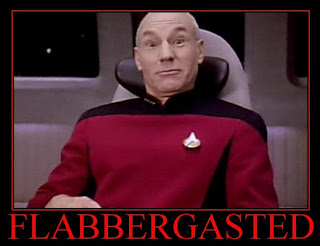 Okay, so back in January, I wrote this blog where I talk at length about the sad, sad people who have to have negative political bumper stickers.

I then received a lengthy, and virulent response (to which I responded.)

Little did I know that the depth of the bumper sticker insanity had barely been marked at all.

This afternoon, I was on my way to pick up the Tofu Muchacha from work, and I was driving through downtown Cincinnati. Cincinnati isn't known as being the most tolerant place on Earth. It's a city known recently for the racism of their sports team owners and race riots.

So anyway, I'm driving, and I stop downtown at a red light. A car pulls up next to me, and honks their horn. I look over, and the windows are tinted, so I can't see the driver. They honk again, and I roll down my window.

The next part is a little bit of a blur.

It happened in regular speed, but you know sometimes something is so surprising that your brain can't give it the proper context quickly enough?

So this dude is leaning over toward me (he's on my driver's side, but he's like.. leaning into his passenger's seat). And I expect him to say something like "Your back tire is low" or "Do you know which way is Plum Street?", but no...

It takes me a second to even register what in the hell he's talking about, but I realize he's seen my "Obama/Biden" sticker on the back of my car.

So I sort of stammer for a second, (as an ode to Colin Firth's Oscar win), and then I say:

He cuts me off toward the end by shouting:

And then he rolls up his window. I admit to flipping him the bird, but I don't even know if he saw me. It was a fucking drive-by heckling.

About a sticker on a stranger's car.

I mean... aren't there a lot of issues with this? Does anyone else think that this sort of stinks of a lack common sense? Would you randomly shout angry things at a person you've never met? What if I had a gun on my passenger seat, and I'd just been all "Okay.... That's one fewer bullet for the spree I was planning, but what the heck!"? Is that a risk someone should be willing to take to shout a couple of angry curses about the alleged political views of a person?

What if I was just borrowing my sister's car? What if I bought it used and just hadn't had time to cover that sticker with my "Buck Ofama" sticker? What if I sported the sticker ironically? (none of the above, by the way.. I really did vote for Obama, and I would again.)

Kind of difficult to have any sort of meaningful exchange with a person when they're shouting from a neighboring car.

Who's he convincing, exactly?

Is being menacing (and barely articulate) supposed to talk some sense into me?

That's hilarious, odd, and kind of scary. What happened to you is something I've feared would happen to me. That's why I've never put a bumper sticker on a car bumper.

I've always wanted my car bumpers to show my support for Obama, Planned Parenthood, national healthcare, etc., but now that I know drive-by heckling really could happen, I just can't. There are too many maniacs driving around.

A drive-by heckling. OMFG, that's hilarious. Have to say...born, bred, and buttered in Cincy, this is why I moved to Columbus. A much less interesting city, to be sure, with less arts and culture, but living in a major college town with diversity and tolerance was too much to pass up.

I get nostalgic for Cincy at times; I miss the symphony and the museums and the reality there is always something interesting to do. But I love being an open, godless liberal more...something that seems rather dangerous down there. If I had to live with intolerant, misogynistic, homophobic, Bible-thumping, racist Rethugs, I'd be pretty sad.