27 Days to Disney: The Carousel of Progress 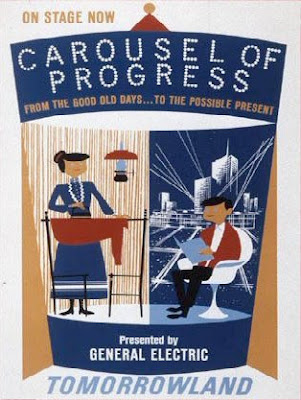 Walt Disney is my hero.

Shocked to hear it, I'm sure. One of the reasons I admire Walt so much is that he was always ahead of his time. His vision was never focused on the present, but rather on moving forward. In fact, my favorite quote of his goes like this:

It's inspirational, hopeful. Exactly the traits I most attribute to Walt. That childlike curiosity that allows new doors to be opened. New paths to explore. It's what led Walt to create Snow White. To create the Mickey Mouse Club. To create Disneyland (and Walt Disney World). New terrain with which to try new things.

Of all of Walt's visions of the future; Tomorrowland, E.P.C.O.T., Etc... the one closest to my heart is The Carousel of Progress.

It was originally featured at the 1964 World's Fair (where It's a Small World also started it's unholy reign of terror), and it shows a "typical" American family learning about new technologies throughout the decades, with vignettes in 1900, 1920, 1940, and the FUTURE! It has been updated several times, but the general idea remains the same. It featured advanced audioanimatronics and a song by the Sherman Brothers, who also brought us the music for The Tiki Room, It's a Small World (!), Journey into Imagination, and others (not to mention about a million movie scores, including Mary Poppins and The Jungle Book.) The song they wrote for The Carousel of Progress speaks of that same look toward the future, and the promise it brings:

"There's a great big beautiful tomorrow, shining at the end of every day."

The movie "Meet the Robinsons" featured both that quote by Walt and an awesome recording of the song done by They Might Be Giants. Check it out. It's awesome.

But anyway, sometimes I get chills thinking about walking down the same streets that Walt imagined in his head. I want to go to Disneyland just to be where he was. When I want to sit in the calm, and relax, and imagine what Walt would think about today's Walt Disney World, I go to The Carousel of Progress. It makes me smile like thinking about an old friend.

Email ThisBlogThis!Share to TwitterShare to FacebookShare to Pinterest
Labels: 30 Days to Disney, Disney, Disney World, I am Cheesy, Nostalgia, trivia

Very sweet and all but the Carousel of Progress is a MENACE. It has killed and will kill again and I won't let it kill ME!

The hell are you talking about? Are you referring to the idiot who got squashed? I mean... the world could use fewer idiots is all I'm saying.