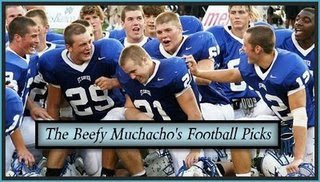 Cleveland @ Cincinnati
PICK: Gotta say... The Bengals weren't a total disaster last week. Frankly, I think that means nothing in the long-run. They may win 4 games as opposed to 2, but it won't make a big difference overall. However, I do think they'll beat the Browns at home. In 3 weeks the Browns have gone from being a team that scares me to a team that I think the Bengals should look forward to playing. BENGALS
Minnesota @ Tennessee
PICK: Well...the Titans are undefeated. The Vikings pose an interesting test for them. I can't imagine Gus Frerotte being the answer for anyone. For god's sake... LEFT HANDED. I'm sorry... Adrian Peterson apparently makes up for a lot. A LOT. At home, though, I think the Titans take it. TITANS

Denver @ Kansas City
PICK: The Broncos fans recognize this... Seems like Denver often gets off to a huge start and then collapses somehow. It won't happen this week though, as the Chiefs suck. Mark my words, however, and note that I'm saying the Broncos don't win 12 games. BRONCOS

Arizona @ New York Jets
PICK: Favre is still a good player, but I think it was foolish of people to assume he'd be able to step right in. He's been in the same system his whole career. I can't imagine how hard it'd be to learn a whole new one at his age with as little practice at it as he has had. The Cardinals are not good, but they're dangerous. CARDINALS

Green Bay @ Tampa Bay
PICK: I continue to be right about Aaron Rogers, and wrong about the Bucs. So... I don't know which way to go with this one. I think I'll take the Packers, just on a hunch. PACKERS.

Atlanta @ Carolina
PICK: Well... Alan was right. Delhomme may be going into one of his down streaks, as he is the very definition of streaky. It's not the best time for that to happen, I must admit. Also, the Falcons confidence has to be pretty high right now (even though it was just the Chiefs). I hate going for road teams in the NFC...so I'll say it's gonna be close, but the Panthers win. PANTHERS

Houston @ Jacksonville
PICK: Eh... The Texans have been disappointing, and it's not gonna help their cause when they run up against the Jags on their annual upswing. JAGUARS

San Diego @ Oakland
PICK: This is always a fun game to watch. Too bad I'm in a show. The Raiders put up more of a fight than they have any business doing, but thanks to Darren McFadden they have immediately become unpredictable. I'm thinking the Chargers are going to get very lucky officiating for a few weeks though, and that may be the difference. CHARGERS

Buffalo @ St. Louis
PICK: Good lord... The Bills have a lot of pluck don't they? They're scrappy! Resilient! I enjoy them a great deal actually. And the Rams are a nice potential break for them after last week's nail biter against the Raiders. Going 4 and 0.... BILLS

Washington @ Dallas
PICK: The Cowboys will not go undefeated. It'll be close though, and this game isn't a factor in that. COWBOYS.

Philadephia @ Chicago
PICK: I just don't buy the Bears while they have no quarterback. I wish I could, because they're likeable, and as I believe I've mentioned before, I have something of a sports crush on Devin Hester. I just learned my lesson with Grossman. A great defense is only so effective. The offense does still occasionally have to score. The Eagles, on the other hand, don't seem to have this problem. EAGLES

San Francisco @ New Orleans.
PICK: Maybe... oh god.. Maybe it's me! Maybe the fact that I am a fan of a team guarantees them to season after season of failure and collapsed expectations. I'm sorry Saints fans. I have to root for someone. Fortunately, the Niners are dangerous, but probably not deadly away from Candlestick or wherever they play now. SAINTS
Posted by Beefy Muchacho at 12:13 AM