The Dome is Always Golder 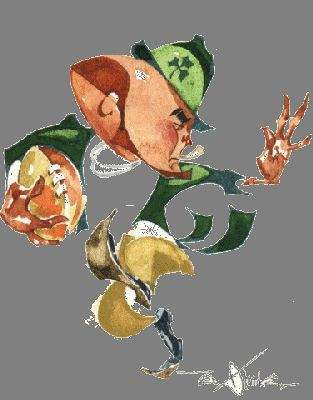 I've been thinking a lot, over the past couple of weeks, about the nature of college football, and the perceptions that have reigned for years and years.

The impetus for this rumination (also the word for the digestion process of cows and other multi-stomached creatures) has been the absolutely ridiculous saga of Notre Dame's search for a new head coach, and their ultimate poaching of my Cincinnati Bearcats and Coach Brian Kelly. In the end, I think the cause was lost from the beginning. This based on this, apparently universally accepted, notion that the Notre Dame head coaching job is just better. Well... this blog is about how I vehemently reject that notion. To that end, I will break down a few of the more common arguments.

1) You Can Be A Legend!
Well... I'm not going to argue that at Notre Dame you can be A legend. My argument is more along the lines of this... While you can be a legend at Notre Dame, you can't be THE legend. That spot has been filled for quite some time in the daunting figure of Knute Rockne. You could win 5 straight national titles and you'll never be mentioned in a breath by yourself. It could MAYBE be "Coach Kelly and Coach Rockne", but even that is a real stretch. At some point there are legends that will never be surpassed. Wooden. Lombardi. Rockne.

On the other hand, if you win a title at the University of Cincinnati... you may as well just set aside for the re-naming of I-75 to Coach Kelly Highway. This town, so football insane that 75 year old men are identifed as Elder Panther letter-winners in their obituaries. So hungry for a title that the 1999 Cincinnati Reds, a team that didn't even make the playoffs, are looked upon fondly... Brian Kelly could have been THE Legend. Not just at U.C. but for the city. A National Title puts him at the top of the list.

I'll take it a step further. If you're not the first great, you're never the greatest. Urban Meyer will never be as beloved as Steve Spurrier, because Spurrier STARTED it. Pitino could never be as loved as Rupp. Those guys may statistically surpass the originals, but the nostalgia keeps them down.

2) The money is just too attractive.
Again... I can't argue with the fact that over dueling 5 year contracts, Notre Dame will out-pace just about anyone (except maybe Texas, apparently.) The bigger issue really is that this is truly a short-sighted viewpoint. I guess it runs counter to the ego required to believe you can actually succeed at Notre Dame, but the recent evidence shows that you're not getting more than 5 years unless you win a title. A BCS bowl won't even earn you 2 years of slack. So let's say that Notre Dame pays you 4 million a year for those 5 years (plus bonuses) and UC pays you 2 million a year (plus bonuses) over that same time. Yes... you're going to make more at Notre Dame over 5 years. Still... let's say you are exactly as successful as Charlie Weis and you get canned after 5 years. UC wasn't firing Brian Kelly. At this point, 2 straight BCS bowls has earned him at least another 5 years, and there's no reason to believe that the success wouldn't continue. So lets say Kelly stays at UC 10 years. Even if he re-ups his contract for the exact same amount (which he wouldn't), with 2 mil a year plus bonuses, he's made more money at UC than he would at Notre Dame (barring significantly more success than his predecessors). Oh...and you're a legend at UC.

I realize I'm making several assumptions, but these assumptions are based on past coaches at Notre Dame with similar success or expectations prior to their arrivals. My broader point is that in the short term, it's true that Notre Dame will pay more, but the likelihood of staying at UC 2 or 3 times longer is very high as well, and at that point the money catches up and becomes less of an issue.

3) You can't win a National Title at UC.
I think that Brian Kelly himself has quieted that talk significantly since his arrival 3 years ago. He won the Big East in his 2nd year and played in the Orange Bowl. Ended in the top 15. He won the Big East and went undefeated in his 3rd year and his (now vacated team) will end the season at 2nd in the country if they beat Florida in the Sugar Bowl. There was a very good chance that had Nebraska beaten Texas that UC would be playing Alabama for the championship THIS season. Even if not, they would have certainly been one of two teams that would be (along with TCU.) We're not talking about cinderella stories here. We're talking about seconds. We're talking about mere percentage points. If I think about it too much, I get dizzy. It's not like talking about George Mason in the Final Four. The Big East is a BCS conference. 2 Straight BCS titles is no joke.

I honestly think the better question is whether you can win a title at Notre Dame. While it apparently has the same appeal to Coaches that it did in 1978, it's been fleshed out for some time that the top athletes don't want to spend their prime ho-scoring years in South Bend, Indiana when they could be spending it in South Beach with The U or at Florida or in Pasadena at USC. You may get the odd top recruit who grew up in the area and wants to play there, but they are becoming less and less. Oh...and it's a sad fact, but a fact nonetheless that many of the top players can't make the grades necessary to even be accepted to Notre Dame. Mardy Gilyard, the Bearcat's best player over the past 2 seasons (and the man possibly most responsible for making Kelly the most desired coach in the land) was academically ineligible for the 2006 season. He would have NEVER made it into Notre Dame.

4) But it's SOUTH BEND.
I read an article that pointed out something interesting (and possibly irrelevant), but when Parsegian left Notre Dame, he was in his mid 50s and never coached again. When Dan Devine left, he was in his mid 50s and never coached again. And those guys were the LEGENDS. Ty Willingham has collapsed so badly after getting canned from Notre Dame that he likely won't get anothern shot after this last disaster. Charlie Weis went in with such confidence that it's jarring to see him taking such gross and petty pot-shots upon his exit. This place will straight-up fucking MURDER you. Brian Kelly is big talk now, but let's see how he feels when people are demanding his firing after he goes 10-3 and loses in the Fiesta Bowl. The thing about South Bend is that there's absolutely nothing to do besides sit around and stew about that football team. Nobody there cares about basketball. Nobody there cares about Purdue or the Colts (or Lions or Bears). It's all one thing being focused on, all the time, all year round. Yes.. it's South Bend, where they bleed gold... but that's a blessing and a curse. You get the best, loyalest fans anywhere in the world, but you also have the shortest leash of anywhere on Earth. Brian Kelly has never faced a single moment of adversity in his entire coaching life. He won a D-II National Title then sold out his team to move to Central Michigan. He abandoned Central Michigan for the next step on the run at Cincinnati (Right before a bowl game),and he just did the same. I'll give it to the guy...he wins. He's as good a coach as we've ever seen here. I just think that while it may matter to us what he did 2 years ago... It sure as hell won't matter to Notre Dame. It's the only place where he could WIN a title and still be on the chopping block 2 years later. The best thing is that there was already a contingent of die-hards who were totally against his hiring in the first place since he's a known democrat and known to be pro-choice. This is something that is an issue for a FOOTBALL COACH in one place only.

This is just a theory, and it's as of yet totally unsubstantiated, but what if Kelly is like Bob Huggins, who was better at coaching players "up" as opposed to coaching top level players to play to their expected level. Huggins' best teams were always the teams that over-achieved. His best players (aside from Danny Fortson) were guys who came in unheralded (Steve Logan, Bobby Brannen, and of course Kenyon Martin.) He made really solid players out of guys like Eric Martin, Nick Van Exel and Terrence Gibson. He got only moderate production out of guys like Mr Basketball Keith Gregor and Mr. Basketball Leonard Stokes and McD's All Americans like Dontonio Wingfield, Damon Flint and Kenny Saterfield. I'm not saying that Kelly is the same way, but we have no idea what he would do with "top flight recruits". I think some coaches are better wringing extra production from guys with chips on their shoulders. I dunno...

Could he have handled the whole situation in a more classless way? I'm going to say no. From the apparent consistent lying to his players, to the utterly gutless way he ducked out the backdoor of the awards banquet, to his complete disregard for the players and fans at UC during his opening presser at Notre Dame. I think it's interesting that less than a week after I write a blog about how I'm typically unsurprised with how athletes and celebrities conduct themselves, I found myself surprised by his conduct. I applaud Mardy Gilyard and the rest of his teammates for being candid about how they feel about the whole thing. The dude sold them out for a paycheck. Nobody can begrudge him leaving for his dream job. He should have handled it better.
So...with that said, I say Good Luck, Brian Kelly. I believe I'll find myself rooting for the rude awakening you have coming to you. I'll give you the props if you win, but I'm not holding my breath for an Irish resurrection. (Touchdown Jesus pun intended.)
Posted by Beefy Muchacho at 10:46 AM

You've said it all here. Agree with every word. Kelly has an uphill battle on his hands and I'd be really surprised if he can pull off the miracle that is expected of him... nice post.