Lasers and the War of Northern Aggression 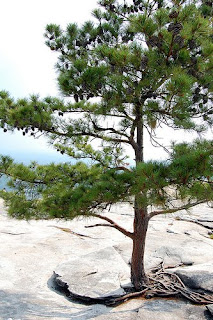 A couple weeks ago, the Tofu Muchacha had a "work thing" in Atlanta which ended on a Thursday. For whatever reason, we both concluded that this was a good opportunity for me to take a couple of days off and join her in the hot, muggy South for a few days of exploration.

I'd say that aside from likely permanant crippling at the hands of Raccoon Mountain, it was a delightful time full of beautiful scenery (you know all those signs as you're driving South on I-75 through Tennessee that say "See Rock City"? Well... you really should. It's pretty beautiful... in fact, oh... what the heck: 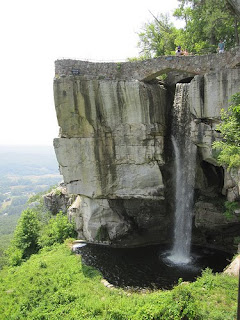 Anyway, we spent some time in Chattanooga, and then headed back South toward Atlanta with a slight veer to the East and stopped at Stone Mountain. It's hard to explain Stone Mountain, really...

On the one hand, it's this kind of amazing natural landmark. It's this giant-ass rock, really. Which doesn't sound all that interesting, but believe me.... Go stand next to an 850 foot rock some time, and tell me that shit doesn't blow your mind. It's FIVE MILES around. There's also this kind of incredible complex of trails and campgrounds and man-made lakes. There's the quarry where all of this awesome granite was... um... quarried for decades. It's really a beautiful place.

We get there, and we see also that you can ride this gondola up to the top of the giant rock (by "gondola" I mean this big almost train-car sized box that can accommodate probably close to 40 people at once.

So... We're riding the first car of the day up to the top, and over to the right side of the car (facing the mountain) is this HUGE relief sculpture carved into the side of the rock. I don't want to exaggerate this, but it's fucking big. And to myself I'm thinking "Weird... why do they have this sculpture of conquistadors carved into this mountain in Georgia."

My mental question was quickly answered, though, as the "Conductor" started his bit giving out info and trivial tidbits about things, and he says: 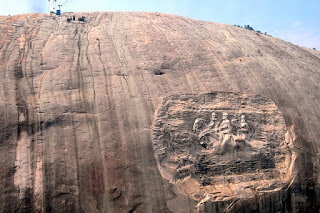 So yeah.. this is the view from the gondola, and there's the fucking "conquistators" who ended up being just this grand monument to racism and war.

So, you know... the rest of my day was sort of clouded by this odd realization that all of this money, and all of this energy was put toward the glorification of the wrong side of the Civil War. The place has a "Confederate Memorial Hall", for Dog's sake. Did you know this was the most visited single attraction in Georgia?

On the one hand, I get it.. you've got this incredible place that features views like this: 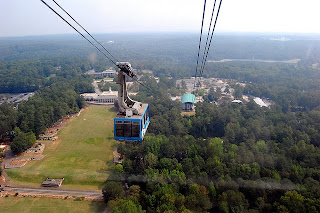 On the other hand, if you look closely at that picture, you'll see this long lawn area and a really beautiful old building there at the end of it? That's the fucking confederate hall. It's like they reel you in with this amazing place, and then they remind you how the whole thing is all about how bummed everyone is that there ain't no slaves no more.

You'll ask me.. "How can it be all bad if there are so many minorities enjoying the place?"

I thought about this for a long time, and I think it's actually this that makes me feel like it's a totally irredeemable place. If they had just been all "Hell Yeah! Fuck you Yanks! Let's hear about the War of Northern Aggression!!! YEeeeeeeeee Hawww" well... I think this would have been better. Not good, certainly, but more honest at least.

Instead, we have this neutered little theme park with train rides and games and 4-D movies that all sort of pay only the tiniest bit of attention to the main point, and focuses instead on the glittery, shiny things all around the main point. They have this huge gravestone, essentially, even down to the granite relief carving, and it's honoring the men who are symbols for the last stand of the pro-slavery movement. The succession movement. These men aren't heroes. It's the same as honoring Mussolini or Franco after they'd been deposed. Didn't the Italian people drag Mussolini through the streets on a pig hook? They sure as hell didn't carve his face into the side of Mt. Vesuvius.

So it's this cute little friendly racism that is all "in the past", so now it's adorable instead of deplorable. It made me feel gross..

Of course, nothing made me feel more gross than the famous daily occurance...

That's right. At 9:30 every night these fools put on a laser lights show that talks all about Confederate history or whatever. Apparently I'm not the only person ever to think maybe the place lacks a little taste, because I've read that they added mention of Martin Luther King to bow to the rage of this small group of protesters.

I'm not a huge fan of laser shows or fireworks or whatever anyway, because I dislike crowds, but it would have barely mattered. We moseyed on down from our dinner (At the "Plantation" or something like that) about 90 minutes before the start of the lasers, and we saw this: 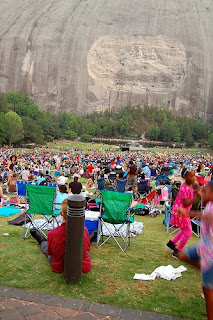 This was 90 minutes before the damned show. (Yes... they project the lasers right on The Redneck Rushmore itself).

We didn't stay for the lasers.

Look... I don't have anything else to say... Isn't it obvious anyway?

I'm sorry... am I wrong to be grossed out by this place? Am I wrong to wish they'd just left it this beautiful natural wonder and state park?

Next time: Indulging our Cats
Posted by Beefy Muchacho at 7:41 AM 6 comments: