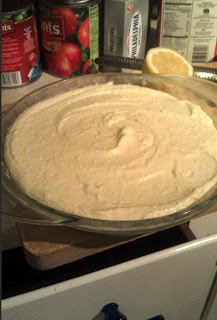 The other day the TM and I were invited to an impromptu gathering at the home of some friends. We were lured with the promise of beer and fire and good company, and that’s pretty much all we need to clear our schedules, so we accepted.

The day before I got a text asking if we could provide the desserts, and as any long-time reader of my blog will know, this was right up my alley. So much so, the TM had purchased a special cookbook called The Joy of Cheesecake for Christmas this past year.

I quickly responded back that I would be glad to bring a cheesecake. After much perusing of the cookbook and keeping in mind the audience (one of the friends has a severe gluten allergy)… I was at a loss. Then the TM suggested a crustless blueberry cheesecake. It looked fairly straightforward, and I like blueberries, so I was sold.

I should mention a couple more things… First, The TM decided to go to bed immediately after we purchased the supplies, and she’s the expert baker in the house. I’ve utilized her advice throughout all of my previous baking adventures. I was flying solo.

Second, there was an additional, optional level of difficulty in that the cheesecake was designed to be flipped after it sets, so that the berries are on top.

It’s possible that I bit off more than I could chew.
After much discussion, the TM suggested that I use wax paper or parchment paper to line the pie pan, thus making the cheesecake easily flappable when the time came.

Did I listen? That would have made far too much sense. My need for aesthetic won the day, and I felt that the crinkly paper would make the cake look messy after the paper was peeled away.

So with that, she went to bed, and adrift on a sea of dairy I went.

The very first bit of instruction the recipe gave was to put the cottage cheese through a sieve. I immediately began thinking to myself “Do we have a sieve?” and “I’ve never seen a sieve in the house.” And indeed, we don’t have a sieve, so I started to brainstorm.

After a cursory look through the kitchen, and dismissing things like the cheese grater and garlic press as either too messy or too time intensive respectively, I settled on a wire colander. I poured the cup of large curd cottage cheese into that colander, threw on a rubber glove, and started pressing it bit by bit through the drainer. I can’t say this was a fun task. The colander wasn’t ergonomically designed to have cheese pressed through it, and my hand started seizing up before long. That may be the saddest thing I’ve ever admitted, but you know.. there it is.

I also had this sneaking suspicion that the drainer didn’t quite make the cottage cheese as smooth as it was supposed to be. When I relayed this portion of the story to the TM later on, without missing a beat, she was all “Food processor. Duh”.

The next step in the process was to combine the sugar, egg yolk, milk, and gelatin in a double boiler until it was all dissolved.

Do we have a double boiler? Nope.

This wasn’t as big a problem since I’ve improvised them before for melting chocolate and whatnot. I ended up using 2 separate sauce pans of different sizes. The biggest problem I had during this step was that I didn’t realize that the main light that illuminates the stove area was out, and I had a really tough time determining the progress of the concoction. This wasn’t really that big an issue, but it was at least a challenge in the moment.

The next steps were pretty straightforward. You know.. the usual:

All of those things are easy, and nothing new. In fact, the remainder of the assembly went smoothly.

I buttered the pie pan as instructed (as preparation for the later flipping) and spread an entire carton of blueberries around the bottom. This was, in fact, the “crust” of this crustless cheesecake. The concept here was that once the cheesecake set, I’d be able to seamlessly flip it over, and have this beautiful cheesecake with this amazing topping of blueberries somewhat embedded into the top, and also a bit softened and sweetened by the process.

I went to bed with at least middling hopes that I could pull it off. I had a fairly lofty expectation that that aside from the strange grainy texture of the entire thing (created by the improper smoothing of the cottage cheese), the cheesecake would be a hit, much like most of the confections from my past. Some of which have been immortalized right here in print.

I even tasted the “batter” off the spatula, and was at least relatively optimistic that the flavors and the flipping would win out.
Anyway, cheesecake sat, and it chilled, and the gelatin set. All overnight.

The next evening, we made preparations to head over. The TM was all “alright.. let’s flip this bitch.” And I was all “Uh… I… uh… I don’t think we should yet. Maybe [The Burly Amigo] will help when we get to their house.”

The TM looked at me skeptically, but shrugged, and was all “Alrighty.” I could see the disappointment in her eyes. That look where she’ll forever know I’m a pussy when it comes to flipping cheesecake.

I believe in that moment she knew we’d never be flipping any damned cheesecake that night. And she was right.

By the time we got over to the [Burly and Gluten-Free Amigos (GFA)] home, the cheesecake had softened a tad, and warmed, and my courage had entirely dissipated. I talked it over very briefly with Burly Amigo (BA from here on) and BA was all… “Yeah… maybe we better not. I’m sure it’ll be good as is.”

With that, we ate dinner, had some beer, and sat around the bonfire for a while. Maybe a little too long, as by the time we got around to wanting the dessert, the cake had softened a bit more, and it didn’t hold shape well at all. Certainly this made the notion of flipping it a laughable one, but even more disappointingly it made the integrity of each piece fairly tenuous too. Gloopy even.

I’m not gonna go through the play by play from here. The cheesecake was consumed politely, mostly. The BA didn’t seem to like blueberries (I could KICK myself because it certainly could be pretty much ANY berry), and I was completely put off by the texture. And the GFA seemed to choke some down, but let’s be clear. Nobody, including me, clamored for seconds of any kind.

I’d call it the worst attempt at a dessert I’d ever made. Certainly, the texture was unappetizing. It was a failure of execution, made worse by my pussery. I believe that had I made an attempt at flipping it at home, and failed, we would have at least successfully made it to the grocery for a replacement. If I’d unsuccessfully flipped it at the home of the Amigos, I would at least have had a good story.

As it is, I had a fairly run of the mill cheesecake with decent flavor, but fatal texture. Like… seriously, it’s no good.

At least in the future I’ll know to use the food processor. Or maybe we’ll by a fucking sieve.

And lord willing I’ll have the balls to flip the bitch.