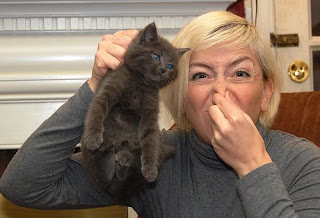 I've mentioned them before. Little Walter (not so little. Fat, really), and Little Roy. Zoro and Sammy. They're a fun little furry bunch. They play, and eat, and fight, and snuggle with each other (and us when we're lucky). Oh... and they pee.

God damnit do they pee.

If you think this sounds ominous, like one of those blogs where the crazy person telegraphs the murder spree they're about to set forth upon... You may be right.

Let me state again, and for the record, that I love these cats. That love is tried every day by one cat in particular. Roy has decided to have separation anxiety like nobody's business. When the TM leaves the house? He pees. When she gets home after a long time away? He pees.

On the bed. On the couch. On the extension cords. On my socks. On the power strips. On the floor. On the mail. I'm certain there are more.

I live in fear that I'll sit in cat pee. Or that I'll go to open my mail, and it will be yellow and damp and stinking of ammonia. It's no way to live, I tells ya.

So, we've now become slaves to the cat. It's amazing. He's the smallest, shyest one, but we are fully wrapped around his left paw-paw.

The TM bought us rubber sheets. She'll argue it wasn't as bad as all that, but yeah. Rubber. Sheets. Like we're fucking bed-wetters. This wasn't exactly a preemptive measure, we realized, but our understanding of the psychology of the cat was primitive at the time.

In conjunction to the shameful rubber sheets, we also started rewarding the cats with treats when they peed in the litter boxes in front of us. Just to be clear, we were now rewarding the cats for doing something even baby kittens figure out in about 6 seconds.

This worked for a little while. We call this period in our history "The Great Pee-ce". I realize this needs a little work, but we can't all have a "Black Death".

So this time of prosperity lasted for a long time. Well... you know...there was a weird time over the Winter when this strange cat was prowling around outside, and we had a couple of sporadic incidents, but still.... a relative peace.

Nearly a whole year. Unfortunately, about 3 months ago, the TM and I decided to re-do the floor of our bedroom, and things were... disrupted. Suddenly we started noticing a distinct "pee smell" on things like extension cords... Floors. And then again... the bed.

We started to realize that his pee habits were connected to the TM's comings and goings. The crazy ass cat has fucking separation anxiety. The TM started making a beeline to the litter boxes as soon as we'd get home and wait to reward him for "making the peepees". It's certainly not dignified.

Whenever he'd have an "accident" she'd blame herself for not paying closer attention to his signs. She was doing some research after a particularly nasty and wet week, and read all kinds of "solutions". The one she felt had the most credibility was this DVD called "Cat Sitter" where it shows hours worth of footage of various small wildlife doing their things... Rats, Hamsters, Butterflies, Parrots, etc... Apparently the trigger times for anxious cats are the 15 minutes before people leave and the 15 minutes after the get home (I have no idea how people know this).

So we head to the pet store and buy the cats a video. I was very sad for us that day. We tested it out in our living room and yes... the cats were HYPNOTIZED. They stood there pawing at my beautiful flat screen, and I started twitching. It was working, but I had this horrible vision of coming home to find my TV on the floor with cat scratch marks all across her screen...

The TM must have sensed my worry, so she suggested getting a little TV for the kitchen where the cats could paw with impunity. This was a pretty aggressive suggestion on the TMs part since she barely tolerates TV for humans. A TV just for cats is... like whoa.

So out we went. I was thinking we'd get some cheap little TV at a cheap little store, but no... The TM went all out and she bought a DVD/TV combo that is really the nicest kitchen TV a cat could have. Really more like a nice dorm TV.

Now we have a TV for our peeing cats. She turns on the TV before we leave, plays their little video, and sets the sleep timer... Crossing our fingers each and every time that the damned animals will be distracted just long enough to forget that we left.

And you know... it's working... mostly. We had a snag when we went to New York for 2 days a couple of week ago, and when we got home, there was like a pee explosion. On the table. On the floor. And most horrifically... our couch. The place where I sit most of the time at the house. It was like a punishment.

and still... there was pee.

We were at the pet store, loading up on pet odor remover, because that's what our life has become, and we come across this pheromone thing that plugs into the wall. It looked intriguing, because it claims to put out some sort of crazy hormones that tell the cats to calm the fuck down. So we bought that. And of course, if it works, we're tacitly agreeing to also buy the monthly refills.

An endless money pit, these cats.

And so far? It's working. I mean... we assume. Since this cat is smarter than us, we can only guess that the most recent remedy has made the difference, but for all I know the fucker is angling for me to buy him a car or something. Or have a daily fish delivery or whatever.

Can I get rid of him? No. He's the TWIN BROTHER of the sweetest, most well-behaved of the cats, and they are bonded so tightly we could never separate them.

The cat has us over a barrel. It's a pretty defeating feeling, I must admit.

How can you stay mad at this: 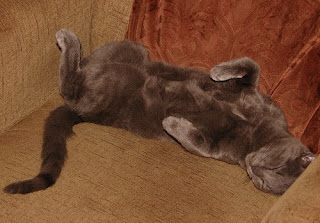 He very likely is plotting where he'll pee next. Probably on this laptop.
Posted by Beefy Muchacho at 11:56 PM 11 comments: 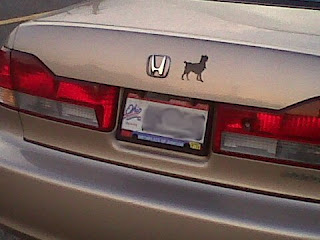 Look. I'm not one to belabor a point. I'll wait til you stop laughing.

Many of you will remember my previous entries on the subject of political bumper stickers generally, and MY own political bumper sticker specifically. I believe that I have made my stance on "Anti" Obama stickers very clear. I also believe that I have made my stance on the harassment of someone solely based on their BUMPER STICKERS very clear. To summarize:
Anti-Obama Stickers = Pointless, sad, (and possibly racist) Sticker Harassment = Pointless, weird, creepy.
Okay... so now that we have that out of the way, let me just say.

You Obama-hating mother fuckers have gone too far.

This evening, the Tofu Muchacha and I went to a nice dinner at our favorite Thai restaurant, and then headed to the grocery store. Both of these took place in what is essentially our extended neighborhood. The place we call home. I mean... I already am feeling all jumbled up about my own home because of the terror of the cats, but that's for another blog altogether.

So anyway, we come out of the grocery store and the TM says "Obama's Gone!"

I wasn't sure what she meant at first, because it's not a thing you can just understand out of context, but then I looked at my car and noted that the notorious Obama/Biden sticker was GONE.

No more Obama Dog. That's what my friend Colette dubbed my car because of the 2 stickers. You can see the 2nd one still in the picture above. The Obama sticker stuck opposite the key hole from the dog sticker.

Now, if you've ever seen or touched a bumper sticker, you'll know that there's no fucking way that thing just fell off. Sticker properties notwithstanding, I've also checked on it relatively regularly ever since I started really thinking about how pissed people seem to get about it. Never once did it even demonstrate a loose corner.

That leads me to only one conclusion. Some mother fucker robbed it. Or at least peeled it off and discarded it.

This is not acceptable.

I'm sorry, but I don't care if my sticker was of a throbbing open sore. I don't care if it was a picture of a murder. Going up to a stranger's car and removing an item is nothing more than theft. This goes back to the whole "leave the stranger alone, because the stranger might be crazier than you" thing. What if I'd come out and seen this person violating my car, and I was all... "You know... I was planning on bludgeoning someone at the Walmart later, but whatever... they'll do."

Or maybe more realistically, what if I just called the cops. What you've done is illegal! You've vandalized my car. You've damaged my property.

You've also made whatever point you feel like you're making, but it has had the absolute opposite effect of your intent. While I'm unlikely to be swayed toward your ridiculous, close-minded, tea-party nonsense anyway, now I not only completely disagree with that self-same close-minded, ridiculous, tea-party nonsense, but... I also want to add "irrational and a whole lot creepy".

What the fuck is wrong with people?

I don't like Sarah Palin, but I don't go scrawling "idiot" on all the SARAH! stickers no matter how much I want to. I might call her an idioton my blog, but that's just a thing people say on their blogs. I have no real support for that (aside from the idiocy), but the point is... it's my blog. I can say that. I can say anything I want. But I can't say it ON someone elses' personal property.

Am I weird to feel like I want to go the opposite way now? I was totally down with just having my quiet little Obama sticker (a replacement has been ordered already, so SUCK IT!).

But now... I dunno. I think I want to really make a statement. Here are the stickers I'm considering: 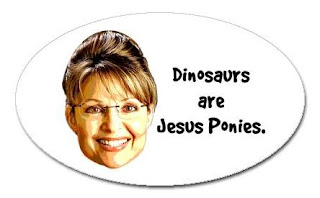 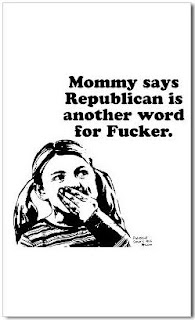 See? Now those are making a statement. Funny as hell, and clearly taking a position. You can't come back from any of these. You are clearly who you are. All I had was a simple "OBAMA/BIDEN" sticker. Not now.