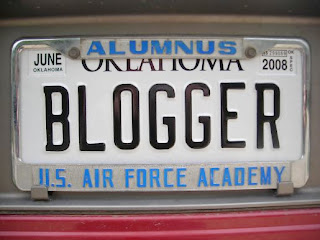 I got a new car, and I am getting vanity plates. I know... I know... Shhhhhhh

So, I'm putting it to you, my readers, to vote on the final decision:

I have to order them soon, so the results will be final as of the end of the business day on Friday.

Thanks in advance for voting!

Email ThisBlogThis!Share to TwitterShare to FacebookShare to Pinterest
Labels: aviation, Cars, Disney, I am the coolest, Polls

The NCAA is Dumb 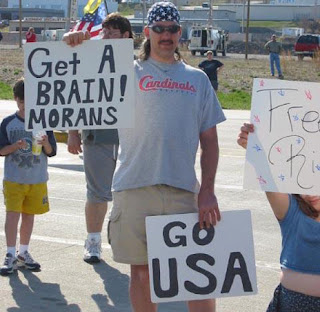 I love this picture for so many reasons, but primarily because he's a Cardinals fan.

I know most people who read my blog don't care about sports. So... my apologies. I guess just check back in another two weeks and see if I've been irritated by something else.

Of course, soon enough, I'll be blogging more about my very fast approaching Disney trip, so you have that other thing nobody cares about to look forward to.

As I was driving home last evening from a rousing viewing of Rise of the Planet of the Apes, (a very bizarre movie about Computers and Wizards), I heard that the University of Miami (Florida) (Only people from Ohio feel the need to clarify) has been linked to "thousands" of NCAA Rules Violations stemming from their football players getting illegal benefits from some dude, who also happens to be in jail for being a part of a near-billion dollar ponzi scheme.

There's all this talk about how this will affect the College Football Landscape and what will be done to punish The U and whatnot, and the ridiculously drastic phrase "Death Penalty" was being bandied about like they're actually talking about something that matters. Las Vegas sports books have taken the first game of the season against "off the board" making it un-bettable.

What a bunch of mother fucking drama queens.

Here's what I don't get... Why in the world does it matter? Is it to impose some sort of relevance on the NCAA, a notoriously ridiculous and pointless organization? An organization whose sole purpose at this point is to hold hostage the keys to the imaginary chastity belts of any given players' standing as a "student athlete". Student athlete...a term so laughably antiquated that the NCAA itself seems to have difficulty defining it.

And what a bunch of mother fucking hypocrites.

According to the rules, a "student athlete" can't receive any sort of compensation or benefit that would entice them to come to a school, or once at the school, can't receive any sort of benefit beyond the benefits they receive as a scholarshipped athlete. This includes being provided hookers, cars, cash, tattoos in exchange for memorabilia, or really anything that can be construed as a benefit bestowed on them because of their status. There are even limits to the amount of money a "student athlete" can earn while working a non-sports related part time job.

This is dumb. Oh... and completely un-enforceable.

The popular radio duo on ESPN Radio, Mike and Mike, argued about the issue this morning. Mike Greenberg believes that regulating the payout of illegal benefits is completely impossible, as has been proven true by years of failure. His solution is to eliminate the rules against it. Mike Golic (a former Notre Dame and NFL player) believes that the rules are necessary, and likens it to the rules against performance enhancing drugs. Greenberg stated over and over again that these aren't the same, and while he had a difficult time correctly articulating why, I don't have that same problem.

The differences are simple:
1) You can't TEST for illegal money or abortions or boats or whatever. It's all sort of grey area. Well... not all of it, but short of having something in writing that says "I gave Cam Newton $X.XX dollars to play football at Auburn University", every circumstance is littered with grey. On the other hand, there are several ways to conclusively test for performance enhancing drugs. Nothing grey about that, aside from every single one of them claiming they thought they were taking B-12.

2) The money, or the sex parties, or the mall trips, or the tattoos don't affect the athlete's performance on the field, whereas the drugs, in fact, do. They're actually called "Performance Enhancing Drugs". This, to me, is the only distinction worth mentioning, even. Reggie Bush would have been the best football player on the field at USC had he received a beach house or not. Would Tony Mandarich have been the best college football player way back in 1991 if he hadn't loaded himself with more drugs than Pablo Escobar's entertainment hutch? The answer is muddier.

The NCAA spends thousands of man hours investigating how much Tyrelle Pryor benefitted from trading his bowl rings for tattoos (as if that bullshit made any difference to anything that happens EITHER in the classroom or on the field.

Somehow this is what the NCAA has become. This sort of fascist accountant.

So what do I think should be done?

1) Keep the drugs illegal. As I said, they're testable, and have been proven to enhance performance.

2) Make the NCAA focus on academic issues. Cheating on exams, not taking exams, not taking enough credits, having other students write papers.... All of the things that could potentially make an athlete ACADEMICALLY ineligible. These are legitimate issues and things that need to be handled by the NCAA (and the colleges themselves).

3) Let the kids take whatever money, handies, boats, cars, houses they are offered, and by whomever offers it. We live in a free market society. Let the kids operate as capitalists, and treat themselves as industries.

I don't think so. I mean... I have no proof of this, since I'm writing this whole blog from the hip, but here's what I think...

First, most of the colleges out there are "dirty" by today's standards to one degree or another, so the actual difference may not be as big as one might assume.

Second, there are still the academic requirements that have to be considered. Duke and Notre Dame still can't accept certain students simply because they can't get into the schools.

Third, there are still scholarship and roster limits. John Calipari could officially offer each of the 20 McDonalds All-Americans money to come to UK (as if he doesn't already), and that doesn't mean that they would all come, NOR SHOULD THEY. You go to a high-profile school to get playing time, and TV time, and get to "the league". A dude can't get to the league sitting on the bench, and if the team is stacked from top to bottom with stars, everyone gets slighted.

I actually believe the schools will monitor themselves a bit. You need role players. You need character guys. You need the unselfish point guards. Just because they CAN offer money to everyone, doesn't mean they WILL.

I think things may even level out more than we think. There are guys who may not rate a money offer from UK or UNC who would normally go there, but Pepperdine is offering 50K instead...

I was talking to my dad, the Beefy Padre, about this, and he thinks the real issue with creating a free-market approach to the whole business is that it opens up the sports world to a higher likelihood of gambling problems, or fixed games, or points shaving, or whatever.

I'm not convinced this would be a problem with my solution, because the motivating factor for most of these issues is the "forbidden money", so if the money can come from anywhere, and the players can legitimately receive money from other sources, the gambling element wouldn't have as much pull. Personally, I think it's probably a bigger risk as it is now.

Seriously, though... that's the solution. Of course the NCAA is pleased as punch to collect dollar after dollar on casino promotions, and gambling kick-backs, and all that nonsense. They'd NEVER give that up. Not to mention that gambling on college basketball and football is a HUGE moneymaker for the casinos.

Did you know that the NCAA regulates what kind of meals schools can provide their athletes? Breakfasts can consist of Bagels, fruit, and nuts. That sounds okay, right? Well... Cream cheese, peanut butter, jelly... Those are not included, so if a school gives the player a bagel, they better fucking make sure he eats that bitch dry, or they've committed a "minor rules violation."

That is not a joke. This is what the idiots are worried about. There's no hope for collegiate sports.
Posted by Beefy Muchacho at 4:15 PM No comments: