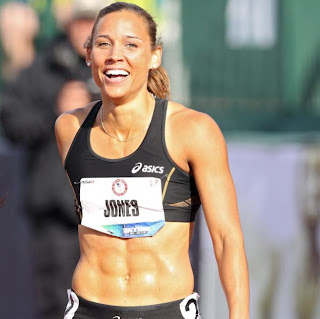 I don't know if you've been following the Olympics, but if you have, you likely know of Lolo Jones.

There are probably at least a couple of things you know:

There are probably at least a couple of things you've heard:

The things you know are 100% true. Lolo is extremely attractive. Like... crazy good looking. She's in phenomenal shape, and she's pretty too. She also didn't win a medal for the second Olympics in a row. The first time she was leading with one hurdle to go, and she fell. The second time she ran cleanly but was beaten and came in fourth.

The things you've heard are another story.

It's probably true, at least to some degree, that Lolo has enjoyed a distinct level of fame reserved for exceptionally pretty athletes in glamor athletic events. If I'm thinking about marketing US Olympians to the American people, I'd probably see her and think about featuring her as well. This is, decidedly, not her fault, and not her issue. If McDonalds wants to pay me to be in their ads, I'm taking their money too.

What isn't true in the very least is that she's not a very good hurdler.

If you're making that statement as a simple reaction to her lack of a win, that's an insane exaggeration. This isn't Highlander. There can be more than one very good, world class, hurdler. Not only does it disrespect her, but it disrespects her opponents as well. Just because she wasn't the best on this particular day, or even if she's never been the absolute best, to say that she's not any good is patently insane and stupid.

Factually, it's also just wrong. She's a multiple time indoor track champion. She runs the 100 Meter Hurdles in under 13 seconds regularly, and the 100 meter dash in under 12. That's really fucking fast.

Just because there are women who are faster (the total number of which could be counted on 3 fingers) doesn't mean that her skills or her abilities are less impressive.

The frustration comes, I believe, out of the fact that someone along the way decided to bring her to our collective attention as a superstar, and for the most part those people usually are superstars. The fact that she is merely exceptional and not the best has seemingly turned the media, and in turn many people who aren't paying attention or thinking about her actual achievements, against her.

Let me be clear on this point... That is NOT on her. That's on us. That's on the media. It's not her responsibility to "live up to" the hype. She may not have discouraged the hype, but what track athlete would? Track stars are, by nature, insanely confident. Personally, I think it's a shame that we, as a culture, feel the need first create stars, and then tear them down if they don't entertain us the way we want.

While we're talking about how fucked up our world is (with the Olympics as the looking glass), let's talk for a minute about Gabby Douglas.

Again, I assume that if you've been watching the Olympics, you know who Gabby Douglas is... For those of you needing a reminder, she's a 16 year old girl who also happened to have won the women's gymnastics all-around gold medal.

This Gabby Douglas has now been criticized by 2 groups within the American people (at least) that I'm aware of...

I saw her criticized on Fox News (...) because during the individual all-around competition she wore a pink outfit as opposed to something representing America. She was essentially accused of having some sort of American self-loathing, or something. Or that she was embarrassed to be an exceptional American, so she subconsciously wore "unAmerican colors".

This?? Is total, fucking, bullshit. It is. It's just sitting there LOOKING for something to criticize. Last I checked, nobody was unsure of where she came from, and she stood and held her hand over her heart during the National Anthem. The fact that she wore pink doesn't make her a commie. In fact, I'm fairly sure commies hate pink. . Nastia Liukin, the actual Russan-born American, won the 2008 all-around gold wearing... PINK. Did anyone mention this? I don't know why people are looking for reasons to criticize this amazing teenager.

The other point of criticism came from a much more disappointing place.

I am so sad that we have a girl who can potentially serve as a role model for Americans everywhere. Boys, girls. Anyone. She's a teenager who can be held up as a success as opposed to being famous for being on some horrible MTV show.

I'm offended that we're not celebrating her success more.

This isn't my last blog about the Olympics. Over on Facebook, I made the statement that Michael Phelps is clearly the greatest Olympian ever, and while many people agreed, other people vehemently disagreed. Or at least felt like it was a fun debate (It totally is!), so....

Over the next couple of days I'm going to formulate my own little greatest Olympian tournament, and we'll break it down. I hope that I can be open enough to not crown Phelps automatically.
Posted by Beefy Muchacho at 12:33 AM No comments: