A Journey of 1000 Miles Begins with a Single Burger 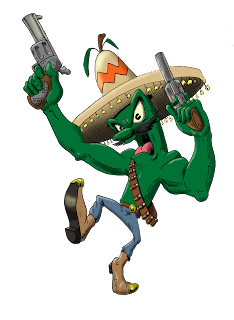 For whatever reason, one of my life dreams is to open a really good, really fun burger restaurant. The goal is to provide an inexpensive but awesome burger to people. I'd stay open late. I'd have live music. Most importantly, I'd have some seriously kick-ass burgers. I even have the best name for it... Beefy Muchachos! (It's no accident that my logo is an anthropomorphic jalapeno)

Well... Some of these are long-term issues... The money and location and business sense will be things that may never become easier or more available, but I can be damned sure that if I ever do get those ducks in a row that I'd have the menu and expertise in my pocket.

I made a resolution that once every 2 weeks I'd try a new burger recipe, and I've made the Tofu Muchacha agree to be my test subject.

Oh... I probably should mention that while I've certainly eaten my share of burgers in my time, I've never actually made a burger from scratch before. Ridiculous, I know. Probably even more ridiculous considering my ambitions, but nobody ever told me I was sane.

Last night was the inaugural burger making adventure. (What better way to celebrate Valentine's Day with a possibly disgusting burger and The Wolfman?)

I'd seen a burger on Diner's, Drive-Ins, and Dives (on the Food Network) where this restaurant put the cheese inside the burger, and it oozed out. I loved this idea, and wanted to make my own version of it. Mine was the Inside-Out Bacon Cheeseburger.

My burger mixture included finely chopped onions, salt, pepper, and ground chuck. I cooked some bacon strips, finely chopped them, and then mixed the cooked bacon into the mixture as well. I sliced quarter-inch chunks of cheddar cheese and folded them into the center of my portioned out beef. Each patty was about a quarter-pound of beef. Then onto the griddle they went.

For a condiment/topping I made a quick mix of chopped hot banana peppers and roma tomato (drizzled with a little bit of honey).

They sure looked pretty: 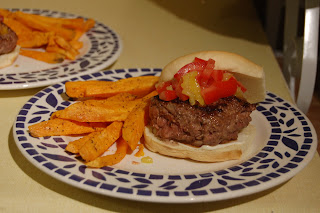 Aaaand here are the critiques...

The Good:
-- The onions were really, really tasty. They added a great texture and really created a good depth to the flavor of the meat.
-- The relish was super tasty. It was a little over-powered by the burger, but that seemed to be more a function of the proportions of the whole thing.
-- The cheese inside worked really well. It kinda bled out some, but that's okay, because it created a kind of cheesy crust in the places where it exploded.
-- The bacon flavor was really nice. I'll talk more about the bacon in a moment.
-- The flavor of the sweet potato fries was really good. The kick the Frank's Red Hot provided was excellent.

The Bad:
-- Because of how thick the burgers were, and how the cheese on the inside melted pretty readily, it was hard to tell when the burgers were done completely. I ended up under-cooking them on the griddle (even though the outside was perfect). I ended up having to microwave them, which bummed me out.
-- The bacon texture didn't come through as much as I'd have liked. It's possible that in order for the texture to stand out enough, I'd have to pre-cook the bacon a lot more to make it super crispy beforehand... but I'm not sure how that'd work in regards to not overcooking it within the beef.
-- The burger was too thick in general. I watched that burger episode again on the Food Network, and I kinda see that those folks make 2 thin burgers, place the cheese in the middle, and then seal the edges. I'll try that the next time for sure.
-- As I mentioned, the relish was a little over-powered. I think that can be fixed by making the burger thinner. We'll see...
-- The bun. It was just a generic "honey" burger bun. I think it might have been better with sesame or poppyseed. Something a little more dynamic.

Overall I think we're looking at a B- for the first effort, which really isn't all that bad. If we're snowed in tonight, which I think we will be, I'm going to try a couple new things (this time with ground turkey...because that's what we have.) The idea of the burger still really appeals to me, but the execution needs work. 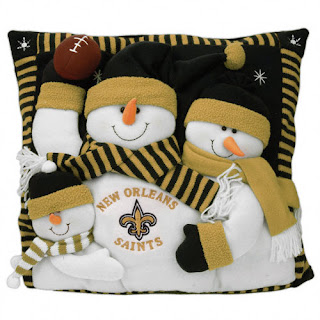 I'm going to end the story there. Sometimes the rant writes itself.
Posted by Beefy Muchacho at 11:17 PM No comments: