What Flavor is Pastel? 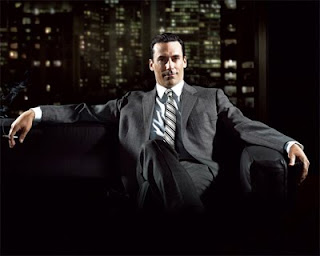 I believe it's been established that I have a long way to go before I'm anything even remotely close to being a good burger chef. I think the biggest problem I have is that since there's no real formula for it, I'm too much left to my own ridiculous devices. I have good ideas, but not a ton of practical experience in actually cooking certain things.

As clumsy and unrefined as I seem to be with the savory, I've experienced a great deal more success with the sweet.

This past weekend is a good case in point.

The Tofu Muchacha and I are on a play-reading committee for a local community theater, and we had our monthly meeting on Sunday. The previous month, the TM volunteered to provide a sweet and delicious pie-type treat for this month's meeting. This seems to have been translated to "Beefy Muchacho will bake a pie for us!"

I'm a sucker for the pie baking and I was excited to try out a new one, especially considering my last effort was something of a disaster. The TM wanted me to try some sort of chilled pie, or a no-bake kind of pie. Like one of those no-bake cheesecakes. I left the recipe choosing up to her.

She settled on something called "Sweet Cherrity Pie" from the Pillsbury Bake-off Cookbook.

I made the pie after a 16 hour shift at work, so I wasn't really in the mood to take pictures the whole way through, but I think I can explain it pretty well...

The crust was made of brown sugar, crushed walnuts, flour, and butter. I mixed it up really well, and then crumbled it into a 13 x 9 pan. Then I baked the mixture for 15 minutes. Once it was baked, I (with the assistance of the TM) pressed most of the crust ingredients into a pie pan, covering the bottom. I set the rest of the crumbly crust aside.

The filling was 2 separate layers.

The bottom layer was a package of cream cheese, a cup of confectioner sugar, and some almond extract. I mixed it until it was smooth, and spread it about a half an inch thick into the bottom of the pan on top of the crust.

The top layer was even simpler, though much more time consuming. It was a cup of whipping cream (whipped all to fucking hell.. that's for sure) folded in with a large can of premade cherry pie filling. Then I covered the first layer with the second, and crumbled the remainder of the pie crust crumbles on top. It came out looking a little something like this: 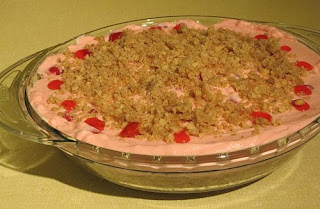 Looks pretty effing awesome, does it not? If you can believe it, it tasted even better!

The best part is that the flavors were distinct, and not overpoweringly sweet. The whipped cream layer didn't have a ton of sugar in it outside of the cherry pie filling, but since the whipped cream itself wasn't sweetened at all, it wasn't insanely sugary.

The textures were nice too... The crust was crispy and flavorful. Then you had a really nice creamy layer with the almondy cream cheese. On top of that was the really fluffy cherry layer. It may be my favorite of all of the pies I've made.

We re-dubbed the pie the Mad Men Pie, because it reminded us of something Betty Draper on Mad Men would serve, and they'd all ogle.