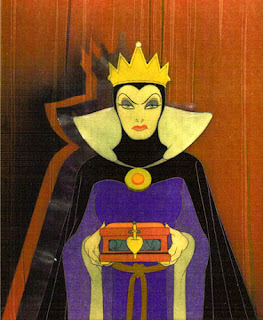 As I was saying back on June 29th, I've decided to re-watch every Disney Animated Feature and review them. I'll be watching them in chronological order of their original releases...

Snow White and the Seven Dwarfs
Released 1937
INITIAL REACTIONS
-- It had probably been 10 years since I last watched Snow White all of the way through and I was struck with the pacing of it. It's very deliberately paced. (That's a nice way of saying that it's slow). I started thinking about how that's likely the typical reaction of a Gen Y cry-baby. "Oh no... It's sooooo boring. When does the action start?"... Well... It really IS slow, and really not a whole lot happens. There are long sequences of 4 or 5 minutes that in more modern story telling that would be 10 to 20 seconds. The long sequence of the Dwarfs forcing Grumpy clean, the long sequence of the dwarfs figuring out that Snow White was the "monster in their beds". These are pretty long sequences.

-- Snow White is one presumptuous bitch. She just lets herself in to the private home of the dwarfs, rearranges their stuff, and then when they STILL welcome her into their homes, she bosses these old (Tiny) men around like she's their mommy. Let's just say I wasn't as charmed by Snow White as the Huntsman was...

-- I found the portrayal of Dopey really interesting. Both because he's a cute, fun character who is universally beloved, and it's hard to get away from that... but also because Disney made a fortune featuring a, clearly, mentally retarded character who is tricked and taken advantage of on multiple occasions by his "friends".

-- I love Grumpy. I mean... It's probably predictable that he'd be the one I'd like the best, but whatever. He's awesome. Though, where did that hillbilly accent come from?

-- There's some hardcore shit in this movie. The Queen wants to have Snow White's heart in a fucking box. That's fucked up. Kids were clearly much tougher than they are now, because I'm sure most of today's movie makers would make it a "lock of her hair" or something. I applaud Disney for being as graphic as they wanted.

-- I talk about the pacing and I talk about how weird Snow White is with the Dwarfs, but somehow I feel like the pacing especially really allowed the connection between the characters build better. This build makes the end of the movie with her in the casket extremely affecting.

MUSIC:
Clearly there are some iconic pieces of music in this movie, but I'll be honest and say it's not my favorite. Almost without exception I like the Dwarf songs the best. Heigh-ho is awesome. Also, for some reason I had misremembered that "Whistle While You Work" was sung by the Dwarfs in the mine, but that is the "Dig" song... which I liked.

VILLAIN:
I mean... I'll stand by my feeling that only a great villain can make an animated movie great. The Queen is pretty awesome. She's scary and mean and fucking crazy. Did I mention she wants Snow White's heart in a box? They talk about this quite a lot. I found it interesting that in order to insure she'd be the Fairest, she makes herself as ugly as possible to kill Snow White. She's single-minded, crazy, and pretty scary. I'm getting the feeling that I'll have to revisit the Villains Tournament when this movie quest is all said and done. I'd give her, at the least a 7.5 out of 10. She's almost too unrelentingly bad.

SIDEKICKS/SIDE CHARACTERS
The Dwarfs can barely be called sidekicks, because they're easily the best part about the movie. I love them all... The gags with Sneezy I'd forgotten about entirely. I was especially entertained by Grumpy constantly being right, but being ignored just as constantly. I felt consistently bad for Dopey, because those other dude abused him so badly. The Dwarfs are awesome.

COOLEST ANIMATION EFFECT
I was going to say the "Fleeing into the Forest" scene would be easily the most visually stunning, and probably was the point in the film where people were like.... "Whoa. This is something new." That and the sequence with the Queen transforming into the Old Hag... Both are big and showy and really impressive.

But through the whole thing, I kept going back to the start of the movie when Snow White is wishing in the wishing well... and we see her from under the well water as it ripples along with the vibrations in her voice. It's so incredibly realistic. For the life of me, I can't figure out how they did it. I assume it was the multi-plane camera. That's an incredible effect. Something people had likely never seen executed that smoothly.

I can see why this movie was a sensation. There's an absolute ton of heart to it, especially at the end when the Dwarfs are just so devastated by the "death" of Snow White. It's a really simple, but engaging story. It's an achievement in hand-drawn animation, even now.

Aaaand it IS really slow. It's only 84 minutes, but you do feel every single one of those. Not that I disliked it, but I definitely think there's a change in taste/preference from the 1930s to now.

My mother took me to see Snow White when I was three years old and it was the first movie I ever saw. I saw it at the movie theater on the BIG screen. The movie terrified me and I had nightmares for weeks afterward, according to my mom. I still remember the trees coming alive and trying to grab her. (was that in Snow White). Love, ykw

I first saw this movie in 1939. I was 10 years old. It did terrify me. The living trees were the worst part. I think I spent most of the movie under my seat. I loved the music and I really loved the movie

I'm shocked you didn't say anything about how freaking annoying Snow White's voice is. It's, like, Minnie level high. Yeesh.

Yeah, the voice is kind of annoying, but I just sort of chalked it up to a product of the time, and stopped thinking about it. I think Snow White, herself, is really effing annoying overall, so maybe I just lumped it all in together.

Great review! I'm sure I've seen it, but I can't recall a thing. It sounds like a good candidate for Mystery Science Theater, which is sadly no longer active. It would be fun to think of all the snarky comments we could make.

Thanks Donna! I appreciate the comment. I agree... MST3K would be fun for a lot of the classic Disney movies. Even though they're my favorite things ever, they all have some cheesiness that makes them perfect for some snark.

Join 1,000,000's who have already discovered easier methods for investing in Ripple.

Learn from profitable eToro traders or copy their positions automatically