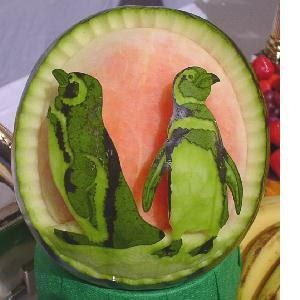 The Tofu Muchacha is tough. She has a really good memory (when she chooses) and she really especially enjoys making fun of me when I do something silly.

Last year I heard somewhere that there would be a pumpkin shortage heading into the holidays, so I bought up a couple of extra cans of pumpkin. Not pumpkin pie filling, but pumpkin

A couple of things I should note.

1) There did not appear to be a pumpkin shortage at any point during the holidays last year.

2) Despite the extra pumpkin that was purchased, I did not actually USE the excess pumpkin.

I believe that the TM is of the opinion that my knee-jerk, pumpkin hysteria was ridiculous, and had I really, really needed to make a pumpkin pie, that I would have likely been able to locate a can or two somewhere out there.

So... now whenever possible, she likes to work in the notion that there's a pumpkin shortage. She just thinks it's soooo hilarious.

So anyway, that's just a little story for you.

This past Sunday, we got together with our friend Colette and bought some pumpkins and carving kits and we fucking went to town.

The TM had little-to-no experience with the pumpkin carving, because the Halloween holiday wasn't exactly emphasized during her upbringing. We mulled some cider, had some Thai food, and baked some delicious pumpkin seeds. Oh... and we carved some bad-ass pumpkins. 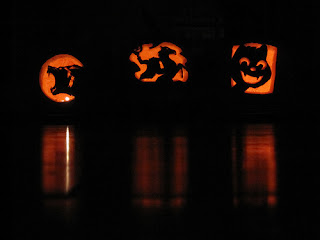 First we have the full vista. Each of our pumpkins, completed and sitting in the dining room. Painstakingly photographed by your boy, the Beefy Muchacho. Are they not awesome? Can't tell? Let's take a closer look. 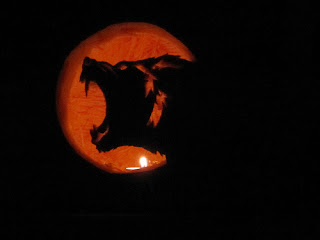 Here's Colette's pumpkin. It's supposed to be a snarling wolf, and while I see that, I also sort of see a snarling bear. Either way, it's pretty effing sweet. 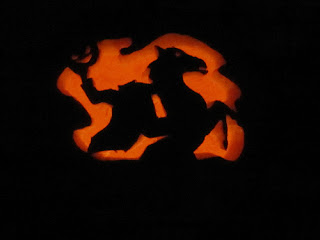 Here's mine. The Headless Horseman in all his terrifying, noggin'-free glory. This is by far the best pumpkin I've ever carved. I am pleased. 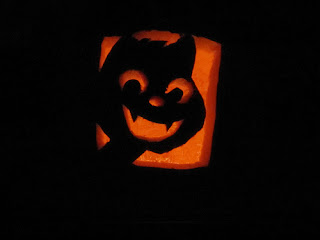 Lastly, we have the TM's pumpkin. I'm sure we all could have guessed that she'd carve herself a cat. I think she did an absolutely ass-kicking job for her first try (that she can recall). I'm of the opinion that there's always a place for a cute pumpkin amidst the terrors that typically reign.

That's all... Just needed a brief intermission from the Great Piano Trip blogs, and also wanted to brag a little.

Yes... We used forms to guide our designs. No, that doesn't make me less proud.
Posted by Beefy Muchacho at 11:59 PM

That pumpkin shortage was very real - I went to 3 Krogers and a Remkes a few months ago and could not get any canned pumpkin to make my pumpkin chocolate chip cookies. It was devastating (in a completely non-threatening way).

True dat. I second that it was very real. I remember trying to make a pumpkin soup last year and not finding a single can of pumpkin in all of Metro Denver!

I'll third. No pumpkin pie filling to be found in Chicago. I tried 5 different grocery stores before I called my boyfriend, who told me about the reported pumpkin shortage, at which time I gave up looking.

I (due to my upbringing) also carved my first pumpkin and it was a cat. The TM and I are truly best buddies!