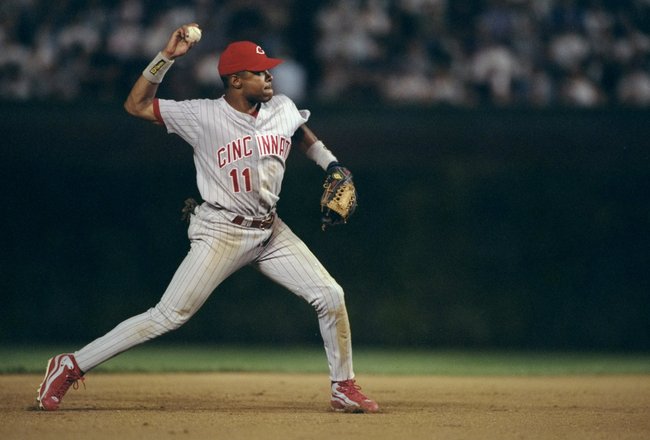 There are very few people who’d say that is “Old”, but I feel it sometimes, nonetheless. I rarely think about that in most of my life. You know… aside from the occasional “Wow… the kids who start high school this year were born the year I graduated”, there aren’t a lot of real life reminders.

The one thing that always gets me, though, is sports. I’m confronted with reminders every day. I think about how if I were a major league baseball player (my short-lived childhood dream), I’d likely be declining out of my prime by now. I think how I vividly remember the 1992 USA Basketball team, and how that was 20 years ago, and how every single one of those players is long retired. I remember guys like Allen Iverson, Shaquille O’Neal, Jeff Bagwell, Mike Piazza… where I remember their entire careers from beginning to end.

Barry Larkin is in the Hall of Fame.

Barry Larkin was my favorite Red growing up. He was the best (or 2nd best) player on every Reds team for my entire childhood. His career spanned, almost exactly , the same years I spent in school. I started 1st grade in 1986, his rookie year. I graduated college in 2002, his 2nd to last year. I saw him play more games in person than any other player. He was the most recognizable player of the only championship team of my lifetime.

Now… he wasn’t my first favorite Red. That honor goes to Johnny Bench or Pete Rose or maybe Mario Soto, but those guys weren’t my players. They were my Dad’s players, and since I want(ed) to be like him, I adopted the players he admired. Pete Rose’s rookie season happened when my dad was 9 years old. Pete Rose was my Dad’s Barry Larkin.

Barry Larkin was the first favorite Red of MY time as a baseball fan.

I’ve had a long running argument with my best friend (The Brawny Hombre) about whether Larkin deserved to be in the Hall of Fame. I always took the “Pro” in that fight, and maybe aside from the overwhelming numerical support for my argument, there was always something else. Something unquantifiable.

The Brawny Hombre always made the statement that it was more of a “gut” feeling that told him Larkin wasn’t a hall of famer, and I made the same argument for him.

None of them held quite the same place of esteem in my heart and mind that Barry Larkin did… Does.

It’s a sign that I’m getting older that a player came up, rose to greatness, declined as all players do, retired, and achieved his place in the Hall of Fame, and I remember it all. I loved it all.

I can’t think of a player I’ve rooted for as hard as I rooted for Barry Larkin. Maybe, one day, another player will come along to grab my imagination. It’s going to be difficult. I’m a jaded old adult now. I’m not as prone to idolatry.

Maybe that’s as it should be. When my dad talks about his favorite baseball moments, he invariably talks about The Big Red Machine. The team of his youth. Baseball is a kid’s game afterall. My teams were Larkin’s teams. My favorite player was Barry Larkin.

And now Barry Larkin is in the hall of fame, validating the 10 year old kid who would scream and yell and cheer for his hero at Riverfront Stadium all those times.

Adam Dunn? Really? Did you just put that there to bait me?

He's my all-time least favorite Red, and I'd personally never call him a good player, but the general feeling at the time was that because he cave-manned a couple of balls over the fence, that he had some value.

People regularly forgot about the fact that he ran the outfield as though he had newly-acquired peg legs, struck out at a ridiculously alarming rate, never drove in nearly the number of people he should have, and in-general played with such a bad attitude that I considered leaping the fence and punching him in the face more than once.

I will never understand that. I think he brought that whole team down when they could've made the post-season. And it was especially annoying when Narron was all about the "singles and doubles" (Just like an early Eisner. Let us shed a tear.)