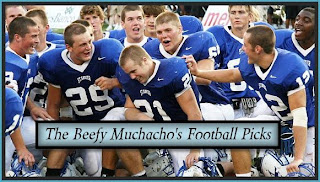 So, here we are. Another Sunday. Seems like these picks are never ending. I know. Yesterday was a good day though. The UC Bearcats won in both basketball (not really a big deal, importance-wise) and football (possibly the biggest win in Bearcats football history). Also, I hung out with some good peoples and met my friend Angie's awesome new puppy, Hank. He's the coolest.
So, here I am on a Sunday, waiting for the NFL to start, and for once not having a ridiculous Bengals game to possibly fuck up my mood. It's kinda nice. Must be what it's like in heaven.

Last week I went 9-6-1. That's right... a fucking tie. I'm going to make an executive decision and say that any time 2 teams tie, the picker takes the tie as well. You can't account for horrible coaching and execution to that degree. Nobody could predict a tie. My overall record is:

I'm already 1-0 out of the gate this week by picking the Steelers, not that I went too far out on that limb.

Tampa Bay @ Detroit
PICK: BUCS. Every instinct tells me that I should pick the Lions, but I'm not going to. I can't bring myself to it.

New York Jets @ Tennessee
PICK: TITANS. I'd like to see the Titans keep winning. It's good for the Bengals to see that a team can be rebuilt quickly. This 20 Year Plan thing is killing me.

Buffalo @ Kansas City
PICK: CHIEFS (I know... probably shouldn't, but the Bills have sort of been falling apart for a while.

Chicago @ St. Louis
PICK: BEARS. I honestly am so pissed at both of these teams. Last week I picked them both to win, and both got their asses handed to them. Not cool.

New England @ Miami
PICK: DOLPHINS. I like Dolphins as much as the next guy, but isn't it a little weird to name your football team after them. I mean... they're not exactly fierce. 10 year old girls collect dolphin stickers. Wouldn't the Miami Leatherskins be better? Or the Miami Transvestites? (Never, EVER cross a transvestite)

Minnesota @ Jacksonville
PICK: JAGS. Both of these teams should be better than they are.

Philadelphia @ Baltimore
PICK: RAVENS. I hope you're happy Eagles. I had to hear Cincinnati fans gloating all week. Over a god-damned TIE. Fuckers.

Houston @ Cleveland
PICK: BROWNS. I think Brady Quinn might know how to play a little. Maybe.

San Francisco @ Dallas
PICK: COWBOYS. For the record; I don't believe the "Tony Romo takes a bum to the movies" story. That didn't happen. Stop buying in to the lies.

Oakland @ Denver
PICK: BRONCOS. I can't figure out the Broncos at all.

Washington @ Seattle
PICK: 'SKINS. Or the Redskins for that matter.

New York Giants @ Arizona
PICK: CARDINALS. Is the Rolle kid from Florida State that just got the Rhodes Scholarship a member of the Rolle family? I mean... the NFL Rolle Family? I'm just impressed by that in general. Also, I think the Cardinals have a shot at going to the Super Bowl.

Carolina @ Atlanta
PICK: PANTHERS. I picked the Falcons last week and they fucked me. May as well give them a shot to do it again.

Indianapolis @ San Diego
PICK: COLTS. Anybody else noticing the Colts are close to being back at the top of the AFC again? The Titans are throwing everyone off the scent, but it's happening. It's happening.

Green Bay @ New Orleans
PICK: SAINTS. Aaron Rogers is having a great year as what amounts to being a rookie. He'll be dangerous for a long time, but the Saints are decent at home, and Brees should get MVP consideration. He may be my favorite player right now.
Posted by Beefy Muchacho at 8:46 AM