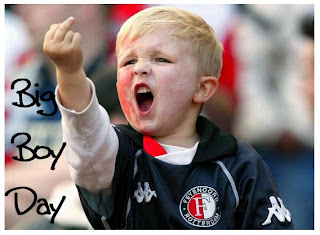 So I moved in to my mom's house the other day. Let me just say that I'm almost 29. These two things should never be facts at the same time, but there it is.

In honor of my complete emasculation, I've instituted a new feature on the blog, starting today. I'm calling it "Big Boy Day". Essentially, it'll be Big Boy Day any time I feel particularly cool for living with my mom. I may not even say anything about it, but when you see the picture above of that tiny, angry child, you'll know... I am sitting somewhere, sucking my thumb, hoping that I may someday re-earn my big-boy pants.

Today I got home from work to find that most of the boxes of my stuff had been damaged by some water in the garage. So officially, my shit didn't even last a week before being potentially ruined by my decision to relinquish my big-boy pants in favor of saving money and attempting to build some sort of positive relationship with my mother. I didn't even spend much time thinking about all of my stuff. Just sort of took note, nodded, and went about my way. It's what I deserve.

Oh.. and as for the mom relationship status... Today's word is "TESTY".

I'll be keeping you updated on that as well.

Starting in February, I'll pretty much be busy with rehearsals or the like almost every night, so I'll have a solid 3 months of being a hermit. Not much conflict should be able to arise. Of course, now that I say that she'll start each day by slapping me in the face, or something, and that'll be that.

In related news, my cats have moved in as well, and are currently dirtying themselves in the basement. They are yet to have full run of the house, as I'm not sure how they'll get along with my mom's dog, so I feel it best for them to sniff each other out under the door for a while. Disney the cat will never actually meet Cooper the dog, as she's moving in to my dad's place to fill the void left by the passing of beloved Polly last week. She's got a lot of work to do, but she's a sweet cat, so I think it'll be alright.

Pippin, I've decided, is my cross to bear. Pawning him off on someone else is the easy way out. I deserve him. It's what I get for going to the vet those 6 years ago and ignoring any one of the 5 beautiful kittens playing and sleeping and purring in the one cage, but rather being drawn to the kitten relegated to solitary confinement for being too mean to the others. As he looked at me with seething hatred, clearly plotting some nefarious act, I said "That's the cat for me!" and thus I have nobody to blame but myself for the wounds and the lack of safety he subjects me to. 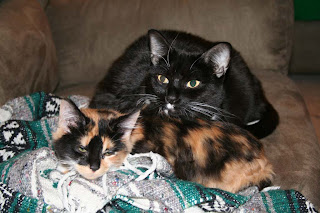 Pippin is the black one. Disney the pretty, sweet looking one. She's much bigger now, as that was taken when she was but a kitten. She's also poofier.
Posted by Beefy Muchacho at 11:13 PM