Who Knew Hamsters Were So Hilarious? 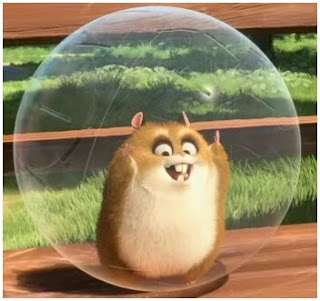 When I was in Colorado a couple of weeks ago, I had some time on my hands to check out the new Disney movie Bolt. I would be lying if I told you that I'd been on the edge of my seat in anticipation for it's release, and there were a couple of reasons for that:

1) While I've liked a couple of the non-Pixar computer animated Disney Films (Meet the Robinsons was great, actually), a couple of the others were downright dumb (The Wild, Chicken Little [thank you Zach Braff]). Even the good ones weren't on par with the brilliance of almost any of the Pixar films.

2) I can not stress this enough... I hate me some John Travolta. I think he's creepy and weird and gross and untalented and a lunatic. Much of my perception of him as a human being (the gross, weird, and crazy part) stems from his inexplicable affiliate with the Sci-fi cult known as Scientology... There's just something really unsettling about those people. Still... Scientologist or not, he's a pretty weak actor. This didn't bode well for a film where he voiced the main character.

3) The trailers didn't inspire me at all.

4) I will admit that as much as I LOVE Disney and Disney movies, I've never felt all that rushed to see the animated ones when they opened. In fact I never did see Cars in the theater. Or The Wild. Or Chicken Little. I guess I just don't feel like they lose much going from big to small screen.

That said? Bolt was great.

Here are a few reasons why...

1) The trailers did not do justice to what turned out to be a really funny (and also kinda dark) script. The movie was a satire of the television/film industry masked as a kids movie about a dog. The story was a thinly veiled ripping of an industry with it's priorities out of wack. primadonna talent (cats), heartless agents, money hungry execs. Still... even without the in-humor, the script still stands up. The themes of heroism and loyalty are universal and couldn't apply better than when told through the story of a dog.

2) The supporting players were all excellent. Clearly the best was Rhino the Hamster (voiced by Mark Walton). That little guy is hilarious in every scene in which he appears as the blindly brave, super round rodent who lives and fights from within a plastic hamster ball. The crux of his character is that he derives his bravery from the adoration he feels toward Bolt himself, and where many other films would leave him disappointed in Bolt at some point, the movie takes the other route and allows Rhino to remain in awe of his hero, even as Bolt himself goes through his identity crisis. In fact, it's Rhino's unwavering faith that provides Bolt the boost that he needs in the end.

3) Travolta and Miley Cyrus were both actually pretty good. As much as it pains me to say it... John Travolta was pretty damned good as Bolt. There were even points where I even forgot that Xenu was in the building at all. Dare I say it... John Travolta may have found his new niche (his old one being that of a disco loving greaser or something). It's possible that the voice work allows him to use his voice (his one inoffensive asset) and also allows him to hide everything else (the offensive ones). I wasn't really surprised to see Miley do well, but you know... it's hard to tell what kind of talent that girl has. I even like their duet.

On a scale of 1 to 5, I'd give Bolt a solid 4. Totally worth checking it out, and I'm almost definitely going to get the DVD now. (Like I wasn't.)

On the note of DVDs... Why does Blu-Ray have to exist, and not only exist but be awesome? WHY? I have so, so many DVDs and soon enough it'll be considered antiquated technology. Not only that, but the fucking Blu Rays are effing expensive. Do you know how long it's going to take me to rebuild my Disney DVD collection in BluRay? A long effing time. And then they'll come out with something else like X-Ray or Disc-Tech or some bullshit. One thing that's for sure? Disney'll be raking in new money on re-releases in perpetuity. Fucking technology.
Posted by Beefy Muchacho at 11:27 AM

I had all of the same trepidations as you going in, but I had to pick a film to see for my birthday at the mall and that one won. I think Travolta did a fantastic job! I think he really gave Bolt his own voice. If you didn't know it was him, you might not have realized it during the film (Christy didn't) and to me, that's a success. I hate the whole celebrity voice acting trend, but I'll allow Travolta.

No mention of the pigeons? They stood out to me definitely.

I don't think this is necessary but SPOILER ALERT!

I may have mentioned to you but I was so shocked about the whole firefighting thing. The whole building is on fire and they're just walking around outside being apologetic. Like, "Well, we're probably too late to save her so we're not going to try. Also, why don't we just go ahead and let the place burn?" I think I was so amused by this because I was so desperately trying not to break into sobs.

I thought Blu-Ray was like DIVX. Some dumb thing that some people have but most people will just ignore it until it goes away.

I definitely chose not to mention the pigeons due to brevity. I loved the pigeons. I loved Mittens too, actually, and at first I thought she'd be a fairly one-dimensional character. The reveal that she was declawed was great, especially after she'd been menacing the pigeons for so long.

Blu-Ray is definitely on the rise. I didn't realize it completely until yesterday when I went to Circuit City and saw a whole wall of them. That's how DVDs started.. A small section at Blockbuster and then BOOM!

Yeah, I liked her too. Although I wish she'd filled out more in the end. I thought she was that skinny because she wasn't eating regularly. I liked her back story, too.

Yes, but no one had anything like DVDs. Not even my dad is interested in Blu-Ray! Maybe if it can last long enough to be cheaper, but I certainly wouldn't invest in that when my DVD player works perfectly well. Take that, Blu-Ray!