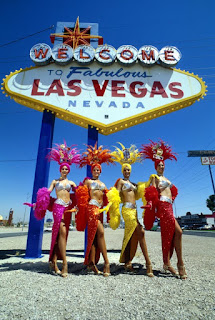 Your friendly, Vegas-Approved Childcare Providers
As some of you know, I returned recently from a long trip to Las Vegas.

Much fun was had, and little money was lost, which are the two absolute best things that can happen to a person in Las Vegas. They'll tell you other good things can happen there, but that's not true. Trust me. Fun and NOT getting wiped out are the best you can hope for.

I've spent a good amount of time on this blog talking about the things I love about Vegas. The shows, the food, the people watching... and this trip was full of all of those things.

I saw "Ka". The Cirque du Soleil show at the MGM Grand Hotel, and let me tell you... that shit will blow your fucking mind. Now... I have a fairly broad sense of theater and showmanship and production...or so I thought, but here comes this show with it's 100 flawless performances of extremely demanding physicality, and it's 100,000 pound stage that moves on an arm as though it weighed about 40 pounds and then rotates and then changes axis altogether to literally make you gasp in your chair (if you can even sit at all with the sheer magnitude of what you're seeing), and then they take it all down to a tiny, simplistic spot light and shadow puppets and you're suddenly a 4 year old child, completely amazed at the beauty of it all.

Seriously. Go see "Ka" and tell me it's not the most incredible thing you've ever seen.

The food? Well... the food is difficult for me, generally, but I still managed to eat pretty well. The highlight would be The Mesa Grill (Bobby Flay's restaurant.) I had the Blue Corn Pancake with Barbeque Duck, and the Spicy Chicken and Sweet Potato Hash (with poached egg). Pretty amazing stuff. I see why the guy is where he is. We also went to The Bellagio buffet, which is great, but totally wasted on me, and The Carnegie Deli, which is something to behold. (Incidentally, while there, I saw 2 girls with the collectively most inappropriate outfits of the entire trip, which says something. Also, there's absolutely no way they'd touch any single thing on that menu, so I don't know what they were playing at. I'm almost certain this was a mail order bride situation.)

- The completely drunken guy with nothing but a backpack and a literal fist of cash searching for the bus stop. He passed us again 5 minutes later. This time with no cash.

-The Jamaican guy who sat down next to me at the Pai Gow table, smoked an entire cigarette in 3 drags, lost 75 dollars in one hand, and got up and left. I don't remember how I know he was Jamaican, but he was. He ended up coming back about an hour later, losing another large chunk of cash, and leaving again.

- The completely friendly and insanely unsettling people at Mermaids Casino. They were nice. They were also likely high on LSD.

But anyway... That's not why I'm blogging about Vegas. Really, it's all about a single question that I have:

Why, for the love of all that is holy, would you bring a child to Las Vegas?

I honestly don't understand it.

Is it the wholesome surroundings like GAMBLING? and PROSTITUTION? and FREE ALCOHOL EVERYWHERE?

Is it all of the wallet friendly food options? I believe that the cheapest meal I had (and trust me, since I can barely eat anything, I can generally eat pretty cheap) was the bowl of soup and coke I had at the Ceasars Palace Food Court that came in at around 12.00.

Let me get this straight... You bring your whole effing family to a place where minors are not even allowed to ENTER most areas of almost every place you can go. The kid-related things are so awful and overpriced, (because I guess they're prisoners already, may as well squeeze every sucker cent out of them), that the most interesting kid-friendly attraction I saw was a roller coaster at the Sahara that was ten dollars PER RIDE . There's actual pornography being passed out on the sidewalk of every street where you're not likely to get mugged. At least half of the shows have nudity. The other half are at least 100 dollars a ticket, if you even planned far enough in advance to get 4 seats together. There are literal prositutes hanging around common areas, which are some of the only areas kids are allowed. You're basically encouraged to start getting drunk by ten in the morning. Smoking is also not only allowed, but promoted by the oh-so-classily dressed strolling vendors in every Casino (if the little tykes happen through from the elevator to the pool. )

As far as I can see, the only thing a kid can do in Las Vegas inexpensively is roast like a fucking tomato drenched in olive oil at the giant, over-crowded casino pools. A priviledge that probably costs the same for your 4 day trip as a lifetime pass to the neighborhood pool. Oh... and the odds of swimsuit tops coming off at some point in the constant drunken debauchery surrounding them are so high that the wager has been taken off the board.

So you get what I'm saying right? If you have the means to pay for these boat anchors to wander around with you during your trip to Vegas, you certainly have the means to send the poor kids to fucking camp where they can learn useful skills such as macrame and having dirty dreams about the girls from the camp across the lake. You know... as opposed to happening across that same scenario re-enacted at 1 AM on Cinemax on your complimentary premium hotel cable, though not with quite the same childlike innocence, if you know what I mean.

Does that stop the hoards and hoards of people from bringing every one of their offspring to middle of the god forsaken desert to torment every adult who wants to have a fun, child-free time? No. In fact, I'm almost entirely certain that The Excalibur Hotel AND CASINO is likely the real mouth of hell. There were points when I saw toddlers walking, unsupervised, across a casino floor at one in the morning. I'm sure there was some guardian or parental figure nearby... or am I?

It all comes down to this my friends:

BUT, if you have kids, and you have this strong need to take your kids with you on your vaction, perhaps take a gander at my blog. There's this other place that I mention occasionally where you're certain to spend a lot of money (just like Vegas) only your kid may have an actual good time... it's called Walt Disney World. (I've provided a link.)
Good day.
Posted by Beefy Muchacho at 1:09 PM

The showgirls pictured might object to being classified as "hookers."

I've been to Vegas with kids. What about the waterpark and Circus Circus for kiddy entertainment?

You're probably right...they may object. I was more referring to their attire.

If Excalibur is the mouth of Hell, then Circus Circus is the 7th level. I've only been there once, on my first visit, and it was so run-down and dirty and skeevy that I wouldn't let my kid use the restroom there, let alone swim in any water park. Plus, it's crazy expensive from what I remember.

You may attribute some of those children to Las Vegas trying to make itself a place for a family vacation. I don't know if they're still working that angle, but I remember they were trying to advertise that there was plenty for the whole family to do.

I believe they abandoned that a few years ago when everyone collectively was all "seriously?".

You should google "Disney Las Vegas Resort". You know it's a bad idea when Disney abandons it.

Oh man! I wish they'd built it. DVC muthafucka! When I win the lottery, first stop is the DVC office.

The DVC is pretty reasonable, considering what it is and all of that. I looked into it pretty seriously when I used to have money. If I had my car paid off right now, I could replace that payment with a DVC payment and not miss a beat. Sadly, there are a lot of "if"s in that...

Dr the expensive ones still hang out around the casino bar/lounge.
I know its 2mo old, not sure what you mean by soon. If you've already been how did it go? And I guess this might be helpful for someone else if you've already had your trip.
I've had girls approach me on the street (Strip and Fremont) and getting 2 of them on https://ladys.one/usa-los-angeles. The prices on the street are usually low $50-200, I had one go down to $5. usually I wouldn't goto a room with one of them if I was getting paid.
The ones I've seen inside the hotels are out of my price range, but I would pay it if I made more money. I have never gone with one of these, I don't want to take the risk at those prices, and not seeing reviews. Most start at $500-$1k.
Have seen a few working the night clubs, and sometimes the day/pool parties.
$100-200 is what I can do and that's usually from backpage.
On the street I mostly see them around PH or Harras. In the casino I've seen them at MGM, Monte Carlo, NYNY, Cosmo, Mirage and Wynn/Encore
One time I was to meet a girl on the floor, then goto the room of a couple that wanted a couple. While I was waiting on the casino floor for her, a girl approached me, she had a similar sounding name to the one I was waiting for, so there was an awkward minute of chat before I realized she was the wrong girl. This was about 2 years ago.
I go down to the strip every now and then, not as often as I used to. Seems like I used to get an offer for sex or drugs once or twice a block. My most recent walk maybe one offer on a walk from Wynn to NYNY and back.
I still see them inside the casinos though. Some are regulars at certain casinos. Security does kick them out, but only certain ones, usually the less discrete ones, and thieves.
Mandalay Bay had a VIP host get busted for providing drugs and prostitutes, I think they got a $0.5M fine. They now have a zero tolerance policy for drugs, if you ask any staff member about getting drugs they have to tell the manager, and you'll be escorted off property, they have random tests and they lose their job if they don't report it. Not sure if the same goes for prostitution. Not sure if its still strictly enforced it has been a few months. Not sure if the other MGM properties are also strictly enforcing the zero tolerance policy.