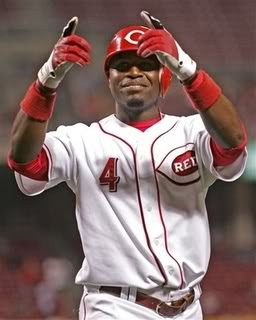 Don't you worry, Bee Pee. I got your back.

Brandon Phillips, the Cincinnati Reds second baseman, was one of my favorite Reds before today.

After today he may be my all time favorite.

You see... Brandon Phillips brought back one of the greatest traditions in all of sports. A tradition that has fizzled and died under the surge of free agency and hyper-rich athletes who all live next door to each other in Orlando and Scottsdale.

Brandon Phillips brought back the hate.

Here's what he said about the St. Louis Cardinals:

Thank you, Brandon Phillips. You have made me smile one of the most sincere sports-related smiles I can remember.

I will always remember talking to my dad about baseball as a kid, and hearing about how when he was growing up, he HATED the Los Angeles Dodgers. I re-confirmed this with him today... He said "We all hated them. We hated everything about them. The way the played. The way they acted. Everything."

In the 60s and 70s the Reds and the Dodgers were the two best teams in the National League. They were always fighting and competing and hating each other. And it was great. That's where rivalries come from.

Then, as free agency gained steam and players played for multiple teams over the course of their careers and they got richer and more detached, the rivalries fizzled. Too often you'd see first basemen chatting with runners at first base. You'd see catchers and batters exchanging friendly words between pitches. It makes me fucking sick.

I am sad I never got to see the days when a Juan Marichal would beat Johnny Roseboro with a bat at home plate.

I'm not saying there should be REAL hate. I don't wish bad things for Chris Carpenter in his personal life, but do I want the Reds to shove that baseball up his whiny ass every chance they can get.

It's good for sports to have rivalries. It's good for fans to have teams to root against. They made musicals about how much people hated the Damn Yankees back in the day, for god's sake.

I love what Brandon Phillips said. Even if it's not true (it is true. totally true) it's a throwback to the days when the players didn't all live in the same gated communities in South Beach in the off season. That's only a good thing.

Tonight, in response, the Cardinal's catcher Yadi Molina started proving Bee Pee right by acting like a little bitch and whining that Brandon huwt his feewings. Then they fought. Like enemies should. And it made me laugh and smile, because finally... FINALLY I have MY Dodgers. I have a team that I can unequivocally root against every minute of every game. I did anyway, but this makes it even better.

The Reds and the Cubs had a great rivalry back in the day as well, some really good Hate. I remember when their knuckleballer -- forget who he was now -- slid into home base and the ump found all these packets of slippery elm! It was good fun...