The Time Traveler's Wife or: The Chicken/ Egg Dilemma 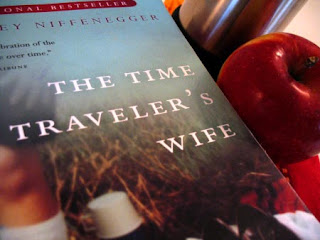 There's a huge portion of The Time Traveler's Wife that deals with the idea of time being circular.

It's really the old Chicken or the Egg question without an answer. Did the egg appear magically or did the chicken?

This ties into my feelings about the book and the movie versions of The Time Traveler's Wife.

I really liked the book. I found it heartbreaking without it falling deep into sentimentality. The structure of it, alternating between perspectives from Henry's to Clare's worked really well, and helped us sympathize with both people, even if we related more to one or the other.. The internal struggles of each of the 2 main characters were real and legitmately trying, and truly at the center of the book. It's interesting... Both characters have some big problems. Henry is an alcoholic at points and a drug addict at points. He's reckless. He definitely has some, at least, nebulous morality. When we first meet him in Clare's “present”, he's still dating Ingrid (who later kills herself, at least in part because of him). Despite these issues, by putting the reader inside his head, and to see the struggles he goes through, and to see his awareness of his flaws... This makes us love him. It makes us root for Clare and him together. The writer shows a definite knack for putting us in the characters heads.

Also, there were some truly beautiful moments of story-telling. I wouldn't go so far as to call the writing outstanding, in terms of language, (Audrey Niffenegger sometimes delves a little too far into the realm of pulp), but the details of the story itself were interesting and emotional.

Henry, watching his mother get killed in some sort of never-ending loop, is heartbreaking enough, but then to add the notion that "if you looked closely" you'd see him literally EVERYWHERE within the scene as all of his "selves" from different points in time appeared to watch the accident take place and yet have no way to change it.... that's not only heartbreaking, but it's tragic.

The scene where Henry avenges Clare's date/assailant was extremely disturbing, but also sort of made you want to cheer....The scene perfectly capped by his return to the present day and Clare immediately knowing where he'd come from as he did something as simple as touching her scar.

There are many small moments and details like this that make the book very readable, very appealing, and very emotional.

And then you have the movie...

Well... I didn't like it. I kind of hated it, actually. Maybe because I wanted to like it so much, but maybe also, because it was a bad adaptation of a very entertaining book.

It lost all of the heart. It played fast and loose with storylines. We never had a chance to invest into the relationship between Henry and Clare. Whereas in the book, we are thrown immediately into the story, and yet also have immediate investment, despite the likeable actors, I found myself not caring about these people. We don't see the growth of their relationship from Clare's perspective at all...

Henry learned about his ability during the time he time traveled at his mother's death instead of during his lovely adventure (as escorted by his older self) to the Field Museum. There's no mention of how he convinces Kendrick to help him (though, admittedly, I felt the “Kendrick, the geneticist has a kid with Downs” was a bit heavy-handed in the book.). There's no real foreshadowing with his death ,as opposed to in the book when Clare sees him right before... There's no real tension between Henry and Gomez. There's no Kimy. There's no Ingrid (or Celia), or the subsequent suicide of Ingrid that haunts Henry. There's no Ben or any of his Library colleagues. There was none of the fun, good times, between Clare and Henry when Clare is a teenager, throwing herself at him. No parties attended by Clare's friends. No Ouiga board session naming the mysterious "Henry". No harbinger of the end where Henry loses his feet to frostbite.

Most sadly, there was a revisionist ending where Henry meets Clare in the meadow like.. 4 years after his death, and then he sort of mumbles through telling her not to wait for him...and END.

This is total bullshit, because the entire book builds up to him dying, Clare finding a letter he wrote to her where he tells her not to wait, and how she's spent her whole life waiting for him, but then giving her this tiny carrot saying that one-day, when she's old, they'll meet again. BUT DON'T WAIT.

Then it cuts to her being an old lady, waiting by the window, and the book ends with their embrace. It's a truly beautiful end, and sad, and bittersweet, because it is clear that she did wait her whole life for one final meeting with him, and how waiting is all she knew how to do.... but also that you sense it was enough for her. You also think about how cruel it was for him to give her that glimmer of hope that they'd see each other again... He couldn't help it. He loved her and longed for her too, but she had to live another 50 years, waiting for that one day to come.

Did that appear in the movie? No.

Perhaps this book was doomed to fail as a movie for the same reason so many of Stephen King's books haven't adapted well... The things that make us love the characters are all internal. The writers create these rich and juicy and joyful and lustful inner voices of these people. How in the hell does a film maker/screen writer convey these voices in a traditionally presented film? They don't. Instead they make bland and disappointing crap like The Time Traveler's Wife.

I mentioned at the start of this blog that the book plays with the Chicken/Egg question, and that it somehow related to my own experiences with the movie and the book.

Every one of the things the movie lacked were things I really felt gave the book texture. I get that there's not really a way to get every detail from a 540 page book into a 95 minute movie, but maybe that tells us that either they should have taken the chance that the audience may actually want to like the movie, and make it longer...or, crazy idea, let the book stand alone.

I loved the book which is why I didn't go see the movie. I may rent it some day but I'm glad I didn't see it. For some reason I thought of the Handmaid's Tale, a book and later a movie. The book was great but chilling so I didn't see that movie either.
--Caren

I absolutely agree. The book was wonderful in many ways, but the movie was lamed down into just another sappy chick flick.