You're Not From Around Here, Are You? 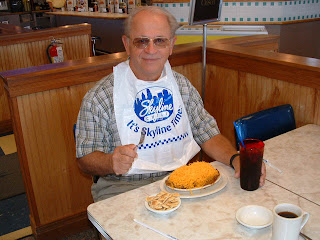 I'm out of town for work in Kinston, North Carolina.

It's hard to say exactly what Kinston is like, because I've spent pretty much no time outside of the office and the hotel. Just enough to pick up some carryout from such renowned bastions of North Carolina cuisine such as Applebees and Ruby Tuesday's.

I asked some people who've spent some time here where I should go to grab some food, and almost all of them mentioned this place called Bojangles. Apparently these Chicken and Biscuits are thought to be delicious and whatnot, and so I went and grabbed a Cajun Chicken Biscuit for breakfast today on the way to work... and... you know... Eh.

It was okay. I definitely wouldn't go out of my way to get it. I'd put it squarely in the Wendy's, Burger King, Rally's class of food joints. Not strictly shitty. It was tasty. But also not something overwhelmingly delicious, and certainly not something that I'd brag about if I were from here. I mean... I hear they have barbecue in this state.

So, I reported my apathy to my co-worker who now lives in Cincinnati and is from down here in the Raleigh area. He said something to the effect of "I guess it's an acquired taste thing. Like you guys and Skyline."

When he said that, I nearly choked on my gum.

You see... Cincinnati is known for a few different foods. There's Graeter's Ice Cream (touted by Oprah, herself, as her favorite). There's LaRosa's Pizza. And there's Skyline Chili.

Skyline is this chili joint in Cincinnati that features Greek style chili sauce poured over various things like spaghetti or hot dogs or baked potatoes. It's kinda soupy. It has a sweetness to it, coming from the cocoa powder and cinnamon in the recipe. It sounds weird,but as far as I'm concerned, is fucking delicious. I've grown up with it. I could eat a bowl by itself... actually I do).

I couldn't believe that this guy was comparing this weird, kind of silly, chicken and biscuits place to my beloved Skyline, and then I realized that about half of the non-Cincy natives who try Skyline just find it weird and silly. I realized that most Cincinnatians love it, but whenever they've tried to expand to other markets it's failed pretty quickly. So... maybe it's just good because it's what I know.

That leads me to the question... What are the famous regionally popular foods, and do they translate to a wider audience?

Philadelphia has cheese steak, and everyone loves that, but they also seem to have scrapple, and that isn't as popular.

I wonder if maybe I'd just find Skyline weird if I was born in Denver?
Posted by Beefy Muchacho at 12:40 AM

Denver-ites DEFINITELY think Skyline is weird and silly. I get the stink eye if I merely put some shredded cheese atop my hot dog.

I'm from the Binghamton-Endicott, NY area - our local specialty was Spiedie's (spiedies.com) sort of like shish kabobs, but without veggies - just marinated lamb, pork or chicken, on a buttered slice of italian bread - delish!

ps: my sister went to the Univ. of Cincinnati - we always loved a trip to Skyline and/or Graeters!

I have to go on record as LOVING goetta. I mean what could be be more delicious with eggs? And it isn't because my name is Gretchen, either.

San Diego - fish tacos.
I used to live in Dayton. Love, love, love Graeters. Skyline? Not so much.
I wish I could have a double chocolate chip cone right now!

I am not a big fan of Bojangles, either. I really think it's where you grew up. I love In N Out Burgers, since I'm from the West Coast, but my ex-BF, who is from Ohio, thought they were just meh. Didn't really understand what people were raving about.

He was, on the other hand, raving about Skyline chili and brought me some when he visited Ohio. I didn't tell him at the time, but I thought it was meh. Sorry. Maybe it's better at the source?

Thanks for commenting, everyone!

Abbey- What do Denver people eat? Is there like a Rocky Mountain Oyster bar or something?

Lisa- Spiedies sound pretty good, actually. Who doesn't love marinated meat on bread? I also wonder if the older people are when they try Skyline for the first time makes a difference. Oh... and EVERY BODY loves Graeters. If they had Graeters in World War II, I think Hitler wouldn't.... well... he would have, but he would have done it while eating Graeters. Wow. I should delete that... Too lazy.

Gretchen- I toyed with adding Goetta to the list, but I wasn't sure how localized it really is. I think you're right though. I've never seen it anywhere else. Goetta is one of those things that is impossible to describe in an appetizing way, but is so, so delicious.

Anon- Fish tacos... I hear the best place to get them is from a truck...

Jane- Oh... I've had In 'n' Out Burgers, and they are something to delight in. My work friends and I made a special point of going to the one near the Las Vegas Airport once.

You absolutely CAN NOT judge Skyline based on the canned version. People in Cincinnati don't even buy that unless they know they'll be snowed in, or wthout power or something. Pales next to the real thing.

And I'm glad you like In N Out. Which really begs the question: do you consider yourself a chili snob or a burger snob? Where I live now (DC), it seems gourmet burgers are the hot trend. I'm not a big fan of spending 10 bux for any burger.

Skyline has a place in Ft. Lauderdale Florida! It's been there for years ( and I don't mean 2 more like 20+).

Chicago has more than pizza. Eli's Cheesecake, Italian Beefs, Chicago dogs, Garretts Popcorn, and more. I visited your city in August. We had Graeter's and found it just "meh", but we loved the ice cream that was at a 7/ll type of store. It was Dairy Co-op or Dairy Mart. I don't remember the name, but the ice cream was awesome. Didn't make it to a Skyline. I am originally from the Memphis area. Yep, BBQ the way that God meant for it to taste.

eToro is the best forex trading platform for new and full-time traders.