Day 8 Denver to Manhattan: Not as Boring as Advertised. 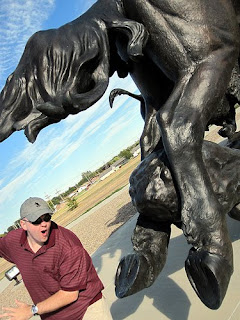 Sorry for the brief hiatus. I've found that blogging about the trip, much like the trip itself, after Denver a little fatigue set in.

The drive on Day 8 started late, but for a very good reason. The T.M's family resides in Denver, and we couldn't pass through without at least saying hello. We did more than that, and had breakfast with a whole mess of them at a place called Benedicts. The trip coincided perfectly with the birthday of one of the T.M.'s sisters, so it was a doubly pleasant occasion. It's always very interesting to see the T.M. with her fam. I like meeting people who knew her before she was her. When she was, you know... turning into her. 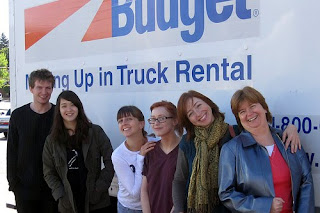 The birthday girl, Carissa is in white. The other sisters are Cynda (the dark hair and black shirt) and Ping (The red hair and glasses). The TM's mom is on the far right, and Carissa's boyfriend Nate is on the end. As always, I am behind the camera. (you can tell, because people who gaze upon me always smile like that.) 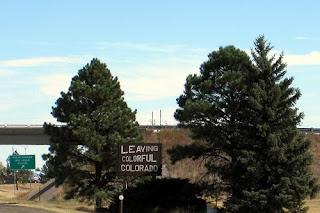 Oh... and as you can see by the sign above... most of it was through Kansas. The dreaded Kansas. My mother told me that Kansas was the greatest test of a relationship. When I posted on my Facebook wall a request for suggestions for things to do, I received things like: "Nothing". "Get through it as fast as possible." "Count the trees." Not exactly a glowing endorsement.

I even went on Kansas' tourism website to get suggestions for things to see along I-70. I gathered several ideas and off we went.

First thing I'll say about Kansas is that the welcome center was freaking sweet. It was huge, and full of brochures, and had fancy cement patterns outside the building. 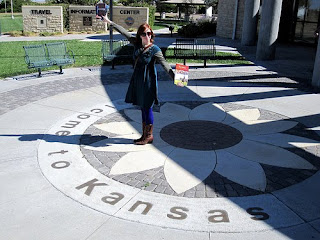 In fact... you know what? I should have taken the Welcome Center as a sign that Kansas is a little self-conscious of their reputation. I mean... those fuckers are trying HARD to convince people that their state is awesome. I decided to reserve judgment until I'd spent more than 10 minutes there.

One of the goals for our time in Kansas was to find some cool antiques to fill the back of the giant truck we were driving. We kinda felt silly driving around in an empty truck, and according to the Kansas Tourism website, and our pre-conceived notions of what people in Kansas do... we thought there'd be a lot of antiques. The first place that was recommended on the website was in a town called Goodland, and it was closed. Not just closed like... for the day, but closed as in "boarded up".

Not a great start for the state of Kansas.

On the other hand, we did happen across another oddity... One of 3 current (of 7 planned) giant Van Gogh paintings in the world. Read about it here. 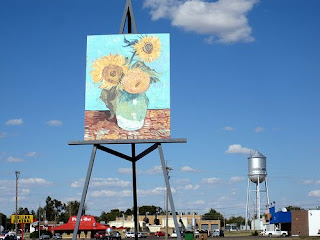 I mean... yeah. It was huge, and in the middle of Goodland, Kansas. Who'da thought?

We kept driving after taking pictures of the giant picture. We kept going and going, and eventually we DID find an antique "mall". I don't really remember where it was, exactly, but that's for the best, as it was mostly just creepy as hell... 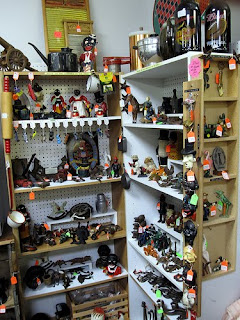 It DID have a giant selection of racist collectibles. Lovely, isn't it? I mean... I don't believe that any particular item holds some sort of evil power, but man... a whole wall of whimsically racist salt shakers and piggy banks. It gives one pause. If anything, the casual way it was presented was troubling.

Kansas actually wasn't all that bad. It was a long, flat drive. Full of wind and grass and a bunch of cows (but not as many as you'd assume, you judgmental bastards...sheesh). But there was plenty of stuff to see and talk about. The thing I most looked forward to seeing was outside the town of Oakley, named after Annie Oakley herself.

It was a giant statue of Buffalo Bill Cody. I've been interested in Wild-West culture for a long time, and Buffalo Bill was a huge part of the glamourization of the Wild West. The town of Oakley is home to this amazing statue: 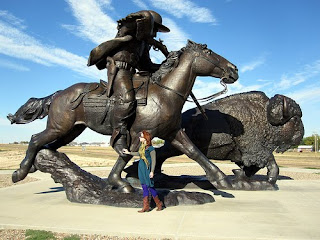 I've included this photo that featured the TM to show the scale of the thing. It was really, really cool. I'd probably rank this statue among the five coolest things we saw on the trip.

It also marked the start of a trend of us sticking our fingers in things and taking pictures. You'll see it continued on Day 9. 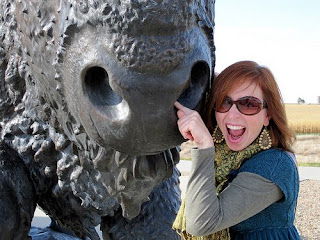 After the Buffalo Bill statue, we really didn't stop again. Even for gas. We drove into the night and ended up in Manhattan, Kansas. Home of Kansas State University. It was a pretty cool little town from what small part of it I saw, but I will say this...

It took me a single visit of about 12 hours to determine that something was definitely going on when Bob Huggins managed to convince 3 of the biggest college basketball recruits in the country to play in that place. Not exactly South Beach.

We're heading into the home stretch. Only 2 more days and 2 more blogs.
Posted by Beefy Muchacho at 9:28 PM

I have been to Goodland, KS. In fact, I stopped for Pizza Hut buffet at the exact Pizza Hut pictured behind that Van Gogh painting in your picture. The anticipation of, and the subsequent recovery from Pizza Hut buffet got me through the state during that particular trip.