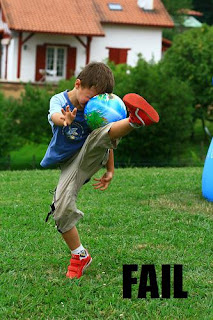 Here’s the blog where I finally break the internet by holding the mirror up to the mirror.

I’m always thinking about blog topics, especially now that I have the pressure of having to get at least one posted per week. About 2 weeks ago, I started noting how annoyed I was getting at commercials, and how they always seem to play into the same base desires of people. I found it insulting that they seemed to be saying that all women could be plied with chocolate and diamonds. That all men just wanted to avoid their women. That women’s problems were trivial enough that a good shopping trip could solve them. That men were essentially alcoholic morons.

I started thinking that I wanted to turn that observation into a blog entry. I’ve been working on it all week, and it never came together. It eventually became something weird about how people take the easy jokes instead of pushing themselves to be more creative.

There were points where I was writing whole television commercials and Jay Leno monologues and  I went into this whole long rant about this dude I used to work with who sang “Danny Boy” at me every day (because my name is Dan.)

The problem with this idea, is that it was just an idea. I didn’t have a real coherent concept behind it, so while I could come up with a couple of cute quips, I was basically doing what I was criticizing. There wasn’t any real insight to what I was writing, so I was just super rambling and unfocused. It never really came together

Of course, what is a blog if not hyper self aware, so I've decided to post the shitty, unfinished blog and let you all see a little bit of my process.

Here’s my blog about way too many things, while at the same time not being about enough. I can’t figure out how to say what I want in an entertaining way. I worked it over 4 or 5 times, and it still sucks, but hopefully that’s kind of interesting in itself.

In italics are the original blog. In regular type are my retrospective comments on said failed blog attempt.

#####
What compels us to take the easy road? I mean… aside from it being easy.

Here’s every commercial targeted at women on TV right now:

“Whoa ladies, chill the fuck out! Since you don’t have real problems, have this delicious chocolate! That should calm your simple little brain. “

“What’s that? The chocolate didn’t do the trick? How about everyone’s guilty pleasure… Shopping! Oh, don’t you worry about that job interview. Nothing can cure a shitty day like buying some shoes! Am I right?”

“Now that you’re bellies are full of chocolate, and your feet are swathed in soft, supple leather, it’s time for some kayaking… you know… since it’s your time of the month. So, put on some white pants and have a fucking ball!”

It’s right about here where I start to lose my train of thought. I mix up tampons and Valtrex. I got too amused with my fake lady commercials and I miss my own point.

It’s not just the ladies… Here’s every commercial targeted at men:

Hi Men… Women are the worst! Have a beer in your man cave while you plan your golf outing.

I toyed with “Hi Men, Women are the Worst!” and just leaving it at that. I think that would have been better.

You know who should be insulted most? Creativity.

Of course, it’s as much our fault as theirs… We all let them get away with it, by going to Facebook and posting about how we “Need… Chocolate….Now.” or “Just had a fight with [our] boss, so [we} bought some new shoes and [we’re] feeling better already.”

Weak examples. I’m not sure why I decided on these. I think I tried being vague so as not to point fingers at specific people.

I get frustrated, though, because even though the creative option is right there for the taking, everyone reaches for the “low hanging fruit”. It’s just all so fucking lame and tired and easy.

I keep wanting to make a “Low hanging fruit” joke, but I never get around to it.

It’s not just advertising, though. There’s absolutely nothing I hate more than the guy who constantly makes the easiest joke. I dunno.. I’m a snob I guess. What fun is it to make the first joke that comes to your mind? It doesn’t take skill, or smarts, or timing to hear someone say something is “hard” and throw out a “that’s what she said”… It requires no more thought than saying the pledge of allegiance. We hear the key word, and our mouth starts moving before even considering the how fucking lazy it is... I admit it… I do it do, but I try not to. I try to let someone else take the easy joke.

Don’t worry… Someone will make the joke. You won’t be left hanging. You know these people. They laugh at their own jokes. They hear that my name is Dan, and they sing “Danny Boy” as a greeting. They speak in made-up accents, and use tired puns, and generally try working the room like it’s fucking 1964 in the Catskills. You get the idea that they walk around hearing the rimshots as they spew quotes from Anchorman.

I like this portion of the blog. It’s not at all what I planned to write, but I find it at least vaguely promising, conceptually. The douchebag who personifies the copier guy on SNL. Always saying the dumbest, easiest thing possible.

Once upon a time, I thought Jay Leno was funny… but then I  turned 12, and realized that if I read the newspaper, I could literally play Celebrity/Joke Book mad libs, and figure out his monologue every night.

What’s that? Lindsay Lohan does drugs? The joke becomes:

“So…did you hear this new thing about Lindsay Lohan? Apparently her drug problem has gotten so bad, she was recently seen snorting Splenda. Yeah… Well.. She heard it was Diet Coke!”

This was originally a Whitney Houston joke, but after she died, I felt the need to change it. I guess mentioning that now sort of undercuts the gesture. Sorry..

So anyway… It’s no surprise that companies advertise to our stereotypes. We let them.

Doritos thinks they’re being original by having a murdering dog bribe a man with chips, but really they’re just doing the whole “Men are dumb and are always swayed by their libido and their appetites” bit. Also falling into this category are the “Nationwide” commercials where the dumbasses conjure food and prostitutes by singing the jingle. GoDaddy thinks they’ll sell domain names simply based on the promise of Danica Patrick under-cleavage. Taco Bell constantly depicts morons who are so blinded by the desires of their stomachs that they can’t make it out of the car before eating their girlfriend’s Chalupa.

Another example of some sort of riff where I don’t really know what I’m saying, so I hope the volume and turn of phrase sort of masks that point. I do like the phrase “under-cleavage”a fair amount.

#####
And that’s where I stopped. I couldn’t figure out how to get back to the main idea. I wasn’t even still sure the main idea had enough meat to make a full blog out of it. Seems more like a short bit in a hacky stand-up special, which… kind of undercuts my point about taking the easy way, doesn’t it?

Like… Even my observations on taking the easy way were easy.
It’s my preference to post blogs that are fully formed, and edited and gone over a few times, but sometimes it’s not in the cards. This week, I tried making a blog out of some half-baked ideas and unfocused thoughts, and I failed.  It’s kind of a bummer, but it is a part of the process.

Next week?
The Disney E-mails return for “Proposed Attractions” where I post a couple of original concepts for Disney attractions, and I poll the readers on the best one.
Posted by Beefy Muchacho at 9:15 AM

I enjoyed this!! It just shows how even the best writers have a hard time! I may not comment but I. do readyour blog. No matter what it is its always entertaining! I get tired if the food blogs or the women bogs that make me feel like I've fallen shirt some how in life. But your blog always reminds me.of how real.people are! Thanks

the same people who sing danny boy to you are the ones who insist on calling me Jen-Nay, like Forrest Gump did, 15 freaking years ago. it was funny once. let's move on. even better -- when one person says it, then the 4 people within earshot laugh and say something lame about peas and carrots.

Thank you, Karina! I appreciate the compliment and I'm glad you decided to comment. It's good to know that I occasionally find my niche in the noise that is the blogging World, even with only spotty success.

Jen... You know, I never thought of that, but I can imagine that would be really annoying. I don't know if you remember the Holiday Homes commercials in the Cincinnati area 15 years ago or so?? "Dan Dan the Red Tag Man". I heard that fucking song all the time, and that wasn't on a national level like Gump.

I wondered if she read your blog and thought maybe she was away somewhere doing her acting and you had more time on your hands so you have more time to write longer blogs but I think you are funny Beefy and hope you keep on writing.

Hi Erma- Thanks, as always, for commenting. The TM is here with me, as always. I hate to admit it, but I've always had the time to do longer blogs, but it's just a matter of prioritizing better.