The Making of The Muchacho 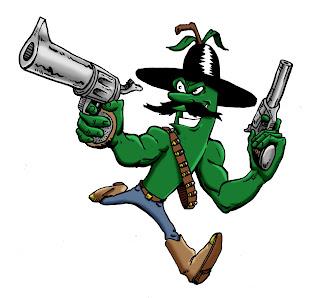 Many have asked what the origin of "Beefy Muchacho" is, and I must admit...

It's not all that glamorous.

From 2003 to 2006 I worked for a "Do-it-Yourself" web design company as a tech support associate. One of the things we were tasked with as IT guys was to create our own websites in order to both familiarize ourselves with the system, and also help with troubleshooting problems.

Anyway, when it came time for him to make HIS website, he thought it through for a grand total of 30 seconds and settled upon BrawnyHombre.com. This made me laugh, and we were good pals, and we thought it would be cool if there was some sort of internal consistency. I mean... nobody would ever see these websites besides us. So, I went to a thesaurus and searched for synonyms for "Brawny".

"Beefy" seemed to be the funniest choice (and less ironic for me than Brawny is for him), and I thought it just went well with "Muchacho".

That's... pretty much it. I just thought it was funny, and I've sort of built it from there, and run with it far more than any truly sane person. In the meantime, I've created logos and personas and had my car personalized, and my shoes...

Alan and I were talking earlier (Still very good friends), and he brought up how funny it is how it started with his lark of an e-mail address, and it really doesn't have any hidden meaning.

It could have been him.

I then made the analogy that he's like the Winklevoss twins, and I'm Mark Zuckerberg. He maybe had the idea, but I  ran with it.

Maybe perhaps I've run with it past a sane degree... Evidence of that?

I just got my Beefy Muchacho tattoo.

I figure that being the Beefy Muchacho has been very good to me, so even if it fades into obscurity at some point, I'll be glad to remember the days of The Beefy Muchacho.

Here's a time lapse film of the tattooing itself. Enjoy!

Email ThisBlogThis!Share to TwitterShare to FacebookShare to Pinterest
Labels: Art, badassery, I am Insane, Tattoos, The Beefy Muchacho

I love the song!

I wish we had gotten the camera started before he shaved your leg or put the transfer on. Oh well! Guess we can do that with mine. (Because, you know, my ribs will require a great deal of shaving.)