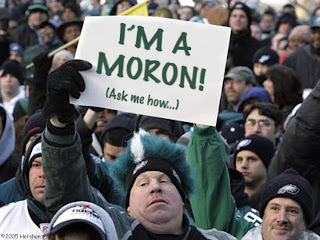 Anyone who has ever read this blog will know that I'm a big sports fan.

Sometimes I think maybe that's a bad thing, and other times I am pretty sure I'm not nearly as big a sports fan as some people. Sometimes both of those are true at once.

And then sometimes I'm embarrassed for sports fans everywhere, and I think that maybe we should all take some stock in our lives.

I was just reading an article about how a football recruit to The University of Michigan tweeted a picture of himself setting fire to a recruiting letter sent to him by Ohio State University.

Sound crazy? It is crazy, absolutely. And yet... according to this article the kid is receiving death threats from enraged Ohio State fans. This is patently insane. There are so many things wrong with it that if I have to enumerate them, I'll be here all day (and really, should I need to?).

Of course Ohio State has come out and denounced the death threats. Oh wait... no they haven't. That's fairly typical for OSU who (if you'll excuse me, oh friends to the North) are not typically good about things like contrition and common sense.

I think my favorite part about the article is the OSU recruit who was all "Well... he doesn't need to have his life threatened, but... he DID post that picture, so...."

Sports fans are insane idiots most of the time.

And listen... this isn't an post designed to bash the silly OSU fans. My very own Reds have some of the craziest fans I've ever heard of. The Reds can go on a 10 game winning streak and the 1st, 2nd, and 3rd callers to the local sports radio show will be complaints.

The Reds traded for a young pitcher named Mat Latos in the off-season (a smart trade, by the way), and Mr. Latos went out and got beat up a bit in one of his first starts. First off, there are NO pitchers who haven't been hit hard on occasion. Second... Latos is a notoriously slow starter, but like.. baseball is a damned marathon, not a sprint.

So anyway, after this bad start, his wife was harassed on Twitter. His WIFE. That would be like you having a shitty day at your job, and some random person you've never met calling your wife and talking shit to her about your shitty day. There is absolutely NO logic to it. I don't give a shit if you are cousins with Yasmani Grandal (one of the Reds traded for Latos), there's no reason to talk shit to a dude's wife. Really, there's no reason to talk shit to anyone, Mat Latos included. Incidentally, Latos has been fucking NAILS the last 5 weeks, so all that hand-wringing and dick-baggery was for naught. Good job.

Oh, and this isn't a state of Ohio thing either.

One of the most interesting stories from the past couple of years in sports is about the insane person who was a big enough University of Alabama football fan to name his kid BEAR. This idiot decided to take it upon himself to ruin one of the great and long-standing traditions of Alabama's rival Auburn University.

For a hundred years, after every Auburn victory, the entire fan base on campus convened around this piece of real estate on the Auburn campus and celebrated around these two ancient and giant oak trees.

And then he called and bragged about it on the radio.

And then, in case you were wondering how the average Alabama fan feels about him, he was a guest of honor at a dozen Bowl parties this past January while the Crimson Tide won another National Title.

I should mention he's currently getting ready to stand trial for the felony he committed (and somehow pleaded "Not Guilty" to despite his recorded, unsolicited confession on the fucking radio).

When the Reds won the World Series in 1990, it was the greatest moment of my young life to that point. It's still high on the list, despite the fact that it's essentially a foggy memory at this point.

When Kenyon Martin broke his leg, I was devastated. When the Bengals lost to the Niners in 89, I cried. I LOVE my teams. I care about my sports. Anyone who watched my Facebook posts this past March when I had several Near-Breakdowns at the hands of my UC Bearcats will know that I care about my teams.

I'd never threaten to kill a 17 year old for torching a recruiting letter. I'd never light a cop car on fire *Cough* UK fans *Cough*. I'd never kill my rivals special trees.

If you're a fan that would, I'm just gonna go ahead and tell you to maybe sit the next one out, Champ.

I agree 100%! I am a huge Reds, Bengals & UK fan. Yes, I am a lifelong UK fan, and I wasn't setting cars on fire in Lexington last March & April.
I also like XU and I wasn't threatening any UC players or fans after the Crosstown shoot out. I thought both teams acted poorly. Generally speaking, I HATE the whole trash talk mentality.

Recently been concerned about your blog , I very much appreciate your writing style , as well as article content . In the content of your article , I understand a lot of very valuable information and meaningful knowledgethese help to me . Thank you for your wonderful to share , I'm looking forward to more similar update.