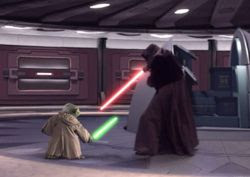 So for those of you at work computers who can't click, the link discusses how there's a remake of Karate Kid in the works, and Mr. Miyagi is going to be played by Jackie Chan.
A quick note as to why this works:

While it was kinda fun to watch Pat Morita kick Johnny's ass in the parking lots and sewers of the world, it was also kind of ridiculous. I mean... I get that he's this master of Okinawan Karate or whatever, but he was also a tiny old man. His midichlorian count must have been off the fucking charts is all I'm sayin' (see above picture). On the other hand Jackie Chan is a real badass who can like... saw through souls with a swipe of his hand and do backflips over thumbtacks and broken glass and whatnot. It would make sense why this kid would believe that anything he's saying could actually help him defend himself.

And the kid is another reason why this remake is destined to be awesome... Jaden Smith is the new Macchio. Not that he's shown himself to be a particularly good actor, he's at least got the rub-off cool of being a spawn of Will Smith. That's gotta be at least 3 times cooler than Macchio would ever be. Steaming pile of shit "Day the Earth Stood Still" notwithstanding.

Also, this takes place in Asia instead of California (because it always made so much sense that there would be these roving bands of nazi-youth/ninjas in So Cal anyway). I noticed that they didn't say Japan, which is already a good sign, as trying to pass Chan off as Japanese is insulting. I wouldn't put it past them, but it's a good start.

More to come as the movie approaches. They film this Summer.
Posted by Beefy Muchacho at 3:58 PM