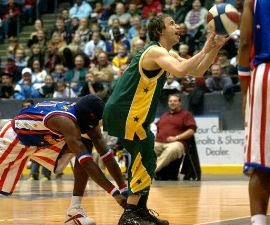 So... after a long, long season I can finally put the football picks to bed by picking the Super Bowl.

It's been a season of ups (I'm assuming. I'm a Bengals fan, so any "ups" are really just hearsay) and downs (see: Bengals fan). I was certainly not expecting the Cardinals to come out of the NFC, but really the NFC has been totally beyond by understanding the whole season, so why stop in the playoffs.

How shitty do you think the Pats feel though? 11-5 and no playoffs, and a team that went 9-7 is in the big game.

Arizona Cardinals VS. Pittsburgh Steelers.
PICK: Here's the thing... I hate the Steelers. Not just because they are the Bengals biggest rivals. In fact, I'd argue that they aren't the Bengals biggest rivals because typically that would indicate some sort of competitive balance. That's like saying the Washington Generals are the Harlem Globetrotter's "Rivals". They may play all the time, but it's actual big news when the Generals win. That's not balance. The biggest reason I hate the Steelers is because our two cities (Pittsburgh and Cincinnati) are so similar. Blue Collar towns. Good people. Midwestern values (whatever the fuck that means). And great football traditions. On the one hand though the Bengals are a perennial laughing stock, where the ownership makes bonehead move after bonehead move. Where the players cause trouble. Where the coach is more and more befuddled after every game. On the other hand the Steelers leadership makes great moves. They sign good players that help their teams. They get rid of cancers like Plaxico Burress. They hire GREAT coaches like Mike Tomlin. They do everything right. It's frustrating to watch a team that has so many similarities in heritage be run so differently. So much better.

So... I can't. I just CAN'T root for the Steelers. It's impossible for me. I can't look at them logically. I can't do it.

All I can see is that if the Cardinals can protect Warner they'll give it a game. They can score in chunks. They have the best and most likeable receiver in the league. They are generally likeable AND they are the underdogs. It's too perfect a situation for me. SO... I'm picking the Cardinals. I may not have a lot of good reasons. It may be asking far too much from them to protect their quarterback against the best pass rushing team in the league. Still... I have faith.

I can't believe I just picked the Arizona Cardinals to win the Super Bowl. I must be on crack.
Posted by Beefy Muchacho at 9:45 PM