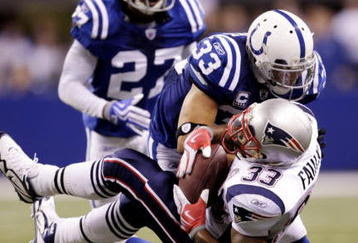 So listen... I don't get riled up by the NFL much. I love watching it. I love talking about it with my buddy Alan and my Dad.

This year has been no exception. My Saints are undefeated. The Bengals have made an excellent soon-to-be ex. (I'm standing by it, at least for now.... I figure the only loophole I have is that I compared my break with the Bengals to a divorce, and well... people are known to reconcile.... we'll see.)

Anyway, as I was saying, I rarely get riled up, but I have to chime in very briefly on Bill Belichick and the Colts vs. Patriots game that took place on Sunday night. First a couple of things right off the bat:

1) I hate the Colts. I hate them. Nothing makes me sicker than the Colts doing well. I honestly feel less hatred for the Steelers, Ravens, and Browns combined. I just hate them so much.

2) I like the Patriots. I don't buy into the cheating thing. I firmly believe that Tom Brady is an all-time great quarterback.

3) I hate Peyton Manning. I think he's the most overrated player I can recall, and that's saying something since I still concede at this point that he's one of the top 5 or so quarterbacks ever. That's how overrated the guy is. I think it goes back to when he was at Tennessee (at the absolute height of my Gator-love) and he was just slurped up and down and left and right...won nothing...and then the Volunteers won the national title the year after he left (with TEE MARTIN!!! HAHAHAHA). That was so, so delicious. Anyway, I could write a whole blog about why Manning is overrated and overhyped, but thats not what this is about... in fact, I'm feeling sick in anticipation of what I'm about to say.

Let me set the stage.

The Patriots are leading 34-28 with 2:06 to go. 4th down and 2 from their own 28 yard line. The Pats have already foolishly burned their timeouts.

What does Bill B. do? He fucking goes for it, and the play he draws up is designed to go about 3 yards. Kevin Faulk bobbles the ball as he's falling and it's ruled that by the time he'd actually secured the ball that he wasn't over the first down marker. The Pats can't challenge it because they have no timeouts left. The booth doesn't challenge it, because we're still outside of 2 minutes. So here's what I say...

If this same decision to "go for it" is made by any other head coach in the league, short of... well... I can't think of a single other coach... If it's anyone else, that coach is fired. I think I can easily say it's the worst call I've ever seen by a coach, period. I don't think I will ever understand it...

1) As much as I hate Peyton Manning (and I hate him a whole lot), I acknowledge that despite his general overratedness, he's still a top 5 quarterback ever. I hate that that's true, but it is. The fact of the matter is... Peyton Manning, when given 75 yards and 2 minutes to score a touchdown is scary enough. You should never, EVER give that son of a bitch more than you need to. 29 yards and 2 minutes to score a touchdown, you may as well just gift wrap it for him and suck him off. He had so much time they were running the ball into the line to make sure the Pats had less time with the ball after the inevitably scored.

2) You show NO confidence in your defense. I get that you like your offense, and that Brady is a guaranteed Hall of Famer. I get that you have so much disdain for the Colts that you can't even acknowledge they can beat you. I understand that, but for the love of GOD. If you don't trust your defense to stop Manning from 70 yards, how can you even pretend to claim you trust them to stop that mother fucker from spitting distance. GOD DAMNIT.

3) If you're going to make the call to go for it, which has no logical defense, at least make a play call that doesn't rely on the iffy hands and counting ability of Kevin God-Damned Faulk. You have Randy Moss and Wes Welker on the field, and I know that they were likely blanketed like they had their own personal Colts Snuggies, but still... maybe tell Fault to take another couple of steps. Why make it so close?

The worst part is... having seen the past 3 plays, I don't see how anyone thought that 2 yards was a gimme. There were 2 running plays to Lawrence Maroney that I thought were set-up to be flea-flickers they developed so awkwardly. (It's hard to explain, but it just seemed like Maroney stalled at the line on both attempts. Such a stall that I expected him to pitch it back to Brady.)

I just... I don't get it. It's a terrible call. I've been struggling to come up with a situation where this play is okay. I would struggle to justify this decision from this location on the field under almost any circumstance. If you took the absolute BEST Patriots team (the 2007 version who went one insane catch away from going undefeated) against the worst team I can think of... The Dick LeBeau Bengals of 2002... There's no chance you make that call if you're the Patriots. What I'm saying is if there's no single professional team (and if you know the 2002 Bengals, you know I'm using that phrase as technically as possible) there's still no NFL offense that you give that chance to. Not ever. Maybe 50 yards. That's what I've decided. If you have the ball at the 50... MAYBE then do you take that chance, but jesus.. what if Faulk gets stripped and Robert Mathis or whoever runs it back for a touchdown. What if Brady throws a pick? I don't see how you ever take the chance. You punt it away unless you may be able to pick up a game-icing field goal. No other time is it acceptable. Period.

When looking up the details of this blog, since the numbers are so important here, I came across dozens of people defending the "gutsy" call. Are you fucking joking? I know that Greg Easterbrook once wrote a column about how people punt too much. How the average play is 3 yards so coaches shouldn't be so quick to punt from 4th and short. I even agree. This situation doesn't apply. Be smart. Give the future HOFer a full field. Make it at least a Challenge. I don't care if your defense is the '85 Bears. You don't do it. Not ever.

I'm so mad about it, I realize I'm not making a ton of sense here, but it doesn't matter. I don't love being put in any position where I have to acknowledge that Peyton Manning is dangerous. So...FUCK YOU BILL BELICHICK.
Posted by Beefy Muchacho at 2:23 PM