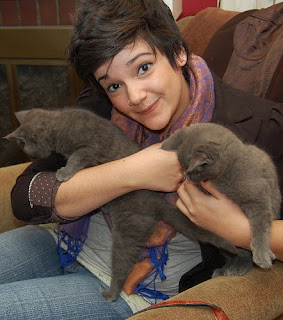 My awesome sister, in an effort to encourage more forays into baking and cooking and whatnot got me a few excellent baking tools for Christmas. Among those things were a pie crust shield (Something I'd never heard of) that is designed to place around the crust of your baking pie in order to prevent the edges from burning. She also got me a pie-crust lattice cutter, which is basically a cheaters way of making latticed pie-crust. It's awesome too, as I'm definitely not above cheating (at least when I'm not in some sort of baking competition...which... I've never been a part of.

Anyway... last weekend, as the holidays were winding down, the Tofu Muchacha and I invited my sister (Tofu Hermana?)to the T.M.'s house to attempt to bake a pie using these new accoutrement. Here's the story of how that went down...

First, the T.M. herself decided what kind of pie we were baking, and we set about scrounging up the ingredients we needed... She wanted to use up the last of her cranberries from the holidays, and she found a recipe in "THE BOOK" for Apple Cranberry pie. I wasn't particularly enthused, because my last apple pie sucked, but who am I to argue with a Muchacha on a mission. In any case, the project was much less about the filling and more about the crust... 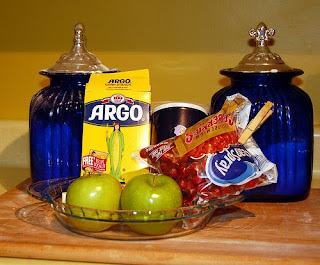 The Tofu Muchacha volunteered to make the filling while Tofu Hermana and I made the crust. Perhaps our first mistake...

I'd decided to be lazy and not use my aunt's vodka crust recipe. I'm not sure why. As I recall from the cheese/apple pie in the Fall, the crust was the best part of the whole thing... the lesson, as always, is that I'm an idiot. We found a basic pie crust recipe in "THE BOOK" and went to work.

I don't have any pictures of the crust mixing process... I'll just say it didn't go smoothly. I guess I never really realized how non-descript and open for interpretation certain portions of pie crust making instructions are... Like what does "until it just comes together" mean? I mean... that's a subjective thing isn't it? Maybe I'm wrong. Obviously I'm wrong, because the first mistake Tofu Hermana and I made was beating the absolute, ever-living HELL out of that pie dough. I mean.. we punished that bitch. When we were next able to access the camera... the dough had been rolled out and balled up at least 2 times. It looked like this: 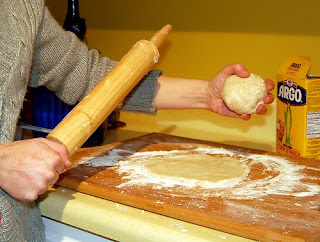 Looks okay, right? Well.. looks aren't everything I guess. That's something I certainly learned through this excercise.

After being rescued, so to speak, by the T.M., we got the crust rolled out to a respectable size and thickness and whatnot, and got it into the pie pan. Little did we know that these next few steps would be the apex of the pie making process. 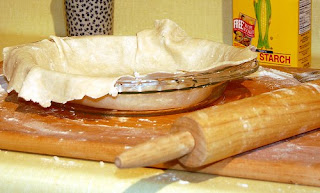 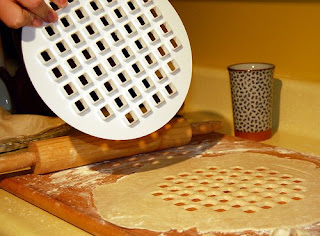 That contraption you see in the above picture is the aforementioned lattice crust cutter. It's really an excellent tool. It doesn't make the crust exactly latticed, but it definitely approximates it well enough. The best part was that I baked up the little crust squares with cinnamon and sugar. That was kind of tasty, though over-baked. 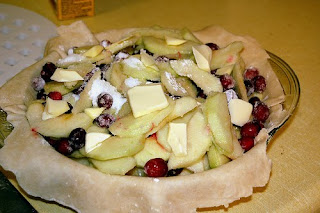 The filling seen above was entirely the work of the Tofu Muchacha. I wish I could take credit for it. It was the only part of the pie that didn't make me want to puke. 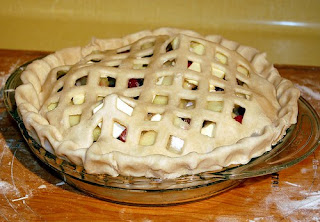 See how pretty it looks? It certainly won't get any better than this. I really do like how the latticed thing turns out. It looks awesome. If only it would make it taste better. 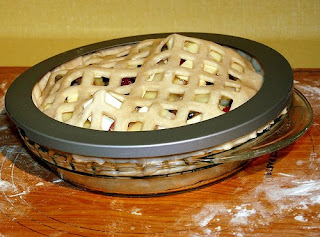 Aaaaand here's the pie crust shield. All loaded up and ready to shield some fucking crust. It actually worked great. I'd never had a lot of experience burning pie crusts anyway, but this certainly did prevent it in this particular case. 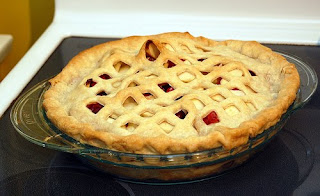 Of course... it's all pointless because the pie crust may have looked pretty, and the filling may have been delicious, but that fucking crust tasted like pure ass. I don't know what it was...maybe the tortured flogging of the dough. Maybe the ridiculously generic pie crust recipe that had no flavor at all. All I know is that it was super tough and it tasted like straight up flour.

So what was that age-old question that I answered? Well... I've always heard that pie, much like sex and pizza is good even when it's bad.

I request that you & the Tofu Muchacha & I bake a pie when you come to CO. Can you bring the lattice thingy? ;)

When you overwork pie crust dough it releases to much gluten from the flour which makes it tough and doesn't roll out well. It's the same reason you can't make mashed potatoes in a food processor.

Stick with the vodka recipe. I saw it on America's Test Kitchen on PBS and they explained the science of it. The recipe is on their site but you have to register to see which I absolute hate so I found it on another site. http://community.tasteofhome.com/forums/p/694493/5906364.aspx

Great show, great recipes, great magazine. I'll give Tofu Hermana some old issues to give to you.