3 Days to Disney: Pirates are Popular 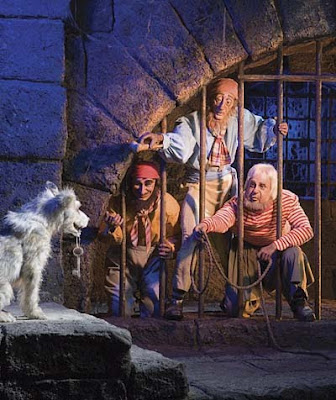 Look familiar you fucking bandwagoners?
I don't know if you've heard of it, but there's actually a movie based on a ride at Disney World.

It's called "Pirates of the Caribbean" and apparently it was quite a popular flick. It even starred well known actors like Johnny Depp and Orlando Bloom.

I KNOW!! It shocked me too. When I found out about it, I placed it at the very tippy-top of my Netflix queue. Not only that, but in my search, I discovered that there are 2.... TWO!! sequels. Crazy right?

In all seriousness, everyone knows this ride. They probably know what it's all about. They've probably ridden it. It's possibly the most popular ride in all of Disneydom. And let me just say... it makes it hard to be a hardcore fan of this ride, because I was the guy that got every *wink wink* to the ride that appeared in the movie. I was the guy that laughed at the guy in the pig-pen when everyone else in the theater was all "When's Bloom getting back on screen?"

They're all fucking late to the party, and it just makes me irritated that suddenly, because of one movie (an admittedly effing sweet movie) it's everyone's favorite ride.

I will also say that I do really like the additions they made to the rides to incorporate the movie characters. Jack Sparrow is an excellent creation, and one that Walt would have been proud of, so I have no issue with it. I especially like the addition of Davy Jones, whose face appears in the mist as you enter the ride. It's awesome.

I can't really cover new ground here, because everyone knows all about it, so I'll just say that the ride is just as awesome as the movie, and has been since 1973. The animatronics are cool. The storyline is funny. The pirates are waaaaay more risque than almost anything else in all of Disney's realm (especially after they got rid of Alien Encounter).

It's one on of the best things Disney's done to integrate their live-action movies with the parks in years, and it made pirates even cooler than they already were.

Also, it's the ONLY ride I've ever risked missing a plane to ride. On one of my trips, I'd missed riding it because it was pouring rain the day I went to Magic Kingdom and the ride had a 4 hour wait or something like that, because most of the queue is covered. Well... I went back the day of my flight just to ride that one thing. Totally worth it.

Question: Of the 126 Animatronic Figures in Pirates of the Caribbean at Walt Disney World, how many are pirates?

For the record, Pirates was in my top 2 before the concept was DeppiBloomified as well. I think it has shared the #1 spot with Peter Pan since my first trip (when I was 5).

You've managed to bring up my #1 biggest regret of this countdown without even knowing it. Peter Pan is my favorite movie. Captain Hook, my favorite character, and yet... No Peter Pan's Flight on the countdown. how did I manage to do that?