I've been so bogged down with all of the Disney blogging that I've sort of neglected all of the other goings-on in my life... so let me catch you up.

1) Last Monday (the 28th), I was invited to "break the fast" at my a family member's home. This is essentially the celebration of the end of Yom Kippur, which entails a ton of fasting and atonement and general teeth gnashing of all kinds. Yom Kippur is the most solemn, serious time of the year for Jews, and breaking the fast is like a great big sigh of relief that it's over.

For this occasion, I was asked to furnish a dessert, which is fortuitous considering all of the baking I've been doing lately. The best part is that they didn't even know about any of that.

Anyway, I'd been wanting to bake a cake for a while... something about decorating a cake seems very meditative for me. I don't know why. I decided on baking a Lemon Cake with Lemon Cream Cheese frosting and raspberries.

I was admittedly a little cranky while baking this, as I was in a bit of a rush for part of the day, having to drive up to Dayton during the actual baking process (a huge thanks goes to the Tofu Muchacha for wrangling the piping hot baked goods while I was gone) and then rushing to get it iced upon my return. Due to those factors, I didn't take my usual string of pictures, but I did manage to get one of the finished cake: 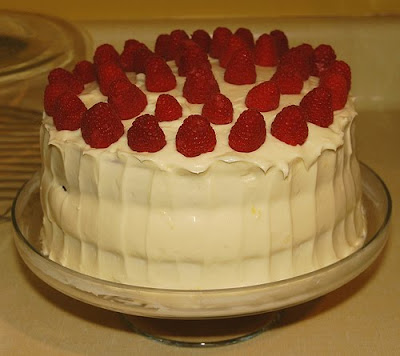 Not bad, I guess. The cakes had sort of a convex shape and when I flipped the top layer over in order to provide a flat surface to ice on top, it created a sort of hour-glass shape. It ended up requiring a ton of frosting to fill the big gaps in the middle, and it was tasty but kind of bulbous. In the future I'll definitely plane the rounded tops down to flatten it out a bit more. Not bad for a first trip though. The cake itself was also a bit dry, which I would have known if I'd read the recipe reviews. I want to make a really dense cake, but have it be moist. Anyone have suggestions or recipes?

2) This one can be filed away in the "Tofu Muchacha is Always Right" bin.

Monday, she and I went canoeing. I hadn't been in some time, and while I was a little nervous that it would be too cold to be in a little boat on a river, the weather was freaking gorgeous... so it was quite pleasant. I was also a little nervous that we'd tip over at some point, but we didn't. We did get wedged into some rocks at one point in the middle of some rapids (as rapid as they really could be...) and we had to get out and pull the canoe free slightly. The water was frigid, but that was no real hardship.

The biggest issue was the Sun.

Being a whitey white boy of Euro-Pasty heritage, I am no stranger to the dangers of the Sun. I've had more burns in my life than a That 70s Show marathon. The worst probably being on my bald, bald head that I got on a drive from Cincinnati to Hilton Head in a convertible. I should have known that the cool breeze wouldn't have protected me from the Suns evil rays, but I didn't, and I was thusly punished.

On this particular field trip down the river, I took precautions. I sprayed my head and neck and arms and face with that sports sunscreen, and thought I was good to go. When we got in the canoe, the Tofu Muchacha took one look at me in my sweatshirt and shorts and said "You wanna get your knees too?" and I was all... "Nah! I'm good."

Four hours and thirteen miles later and down river I started feeling like my knees were a little hot. ON the car ride back to town I had the AC blowing on them directly. By bed time, I couldn't sleep on my stomach because the contact with the mattress made me cry. By last night I couldn't sleep at all. It's like the constant creasing and walking and standing has been perceived as taunting the sunburn gods or something. It's really, really painful.

Now I just need to find me some fucking aloe.

What the fuck is the world coming to? Have people gone even more crazy than they already have been? I've had a couple of the most insane experiences on the road in the last couple of weeks, and I seriously don't get it. Let me lay it out for you....

Experience # 1: I was driving into downtown from the North and I had to get over twice in order to make my exit. It was crowded, but I had plenty of time. I signaled and started making my way over, and this gold car sped up to try to prevent me from getting in. Just to be clear, I wasn't pushing them out. There was plenty of room if everyone just maintained speed. But no... she sped up to try to cut me off. She failed, but sort of did that weaving thing that people do in auto races when they're drafting. Anyway, she got over again and I had to get over as well...so I signaled. And again, if she just maintained her speed we'd all be in the lanes we needed to be and everyone would be happy. This time, though, she sped up even more aggressively and she actually cut me off, preventing me from getting over. I ended up slowing down to let her pass completely (since she matched my speed initially after pulling up along side of me. Once I slowed down, she cut completely across my lane, and we actually crossed. So now I'm in the lane to her right and we come to the stop light at the exit. She actually stops 5 car lengths shy of the car in front of her so that we're stopped even at the exit. She rolls down her window and starts sreaming at me that I cut her off twice!

I would have tried to logic her up, but my pimp-hand was stayed by the Tofu Muchacha being in the car and reminding me that trying to logic-up a stone is a pointless task. In any case, it totally blows my mind that a person who was putting US in danger 2 times was so appalled that I would try to...you know... drive safely.

Experience # 2: This one happened on Monday. I was minding my own business on highway, and a dude on my left side cuts directly in front of me without signaling and then slows down. I sort of give him the "what the hell, dude?" hand signal, but didn't honk, and went on my way. I changed lanes to the left, and ended up directly on his left...I look over to see what the crazy person looks like and he's FLIPPING ME THE BIRD. Like... before he even knew I was looking over, his hand was up in the bird position. I couldn't believe it.

Another person who acted crazy and dangerous on the road, and then ATTACKED ME for you know... looking at them.

Tell me... What's happening in the world where these crazies have been released from the asylum and are roaming Cincinnati in shitty, late 90s automobiles?
Posted by Beefy Muchacho at 10:01 AM