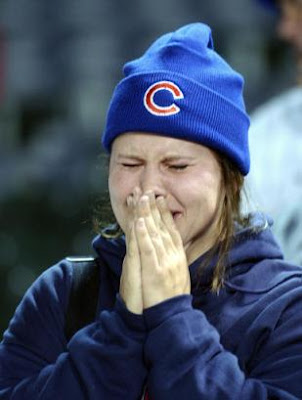 I feel ya, Cubs fan. I feel ya.
In January of 1989, The Cincinnati Bengals made me cry. This was before I had real reason. They had finished their most glorious season with a heartbreaking loss, but there was truly nothing to cry about. They had promise. A young quarterback with nerves of steel and blonde, flowing locks. A brash running back tandem, one of whom fathered an end-zone dance craze so ridiculous we all should have known it wouldn't last. A defense... well... the defense wasn't spectacular, but man that offense was fun to watch.

We had it good. We had years of prosperity to look forward to at the helm of the S.S. Ickey and Boomer.

I was not even 9 years old, but I bled Orange and Black. They had me.

Then, not even a year later the legend behind the scenes, the great Paul Brown, passed away. Little did we know how devastating a loss it would be.

The next 20 years have been well documented. 2 more winning seasons. 2 more playoff berths. And 18 other seasons of being just about the shittiest team on Earth, and since the idiot son Mike Brown was at the command, things continued to look bleak.

There was a brief time in recent years when things seemed like they may be getting better. Marvin Lewis drafted Carson Palmer. Chad Johnson (that's right) broke out into stardom. It was exciting for a while, but the curse continued. The sole playoff appearance started with a blown knee and went down from there. Nothing close since. Frankly the whole thing has been torture.

Hard to really put the last 20 years into words that do them justice. We've had misfortune and mistakes of all kinds. They drafted great players wisely and fucked them up (somehow) like Dan Wilkinson. They've drafted great players unwisely and things went just how you'd expect (Reinard Wilson and KiJana Carter). They've passed up whole drafts of picks to take Akili Smith.

If I listed every terrible game. Every terrible moment. Every terrible player or pick, I'd be here all day, and frankly my buddy Alan is much more encyclopedic in his knowledge of those stats and facts. I'm a more emotionally driven fan. I'm not rational (see: my hatred of Adam Dunn).

Based on those feelings, and my absolute exhaustion at every gut-wrenching game and play and decision, I made a decision.

I put the Bengals on notice. During last season, I selected a new "favorite" team to follow and cheer along with the Bengals. That team was the New Orleans Saints. I love the way Drew Brees plays. I like Sean Payton. I want to see a downtrodden city like the Big Easy have something good happen to them. I needed a team to root for that wouldn't kick me in the nuts at every possibly opportunity. The Saints haven't exactly been the best team in the world in my lifetime either, but they seem to make good moves. They seem to be at least TRYING to win.

After the season, I gave the Bengals one more season (a one year contract, if you will) to show me something. To make me believe. I made one caveat. "No receivers or running backs in the first round". They took Andre Smith, so they passed the test.

I was willing to do double rooting duty again this year with my Saints and my Bengals and see what happened.

Then the Bengals played the Broncos in the first game of the season, and then this happened:

Well... I have a choice. Just because I'm from Cincinnati doesn't mean that I have to suffer. I won't do it anymore. I'm divorcing the Bengals.

I know they're 4 and 2. I know that they have a chance this season, but I don't care. If they do well, that's great. I'll be happy for them. I'll never root against them. I'll root for them casually... I'll never cry for them again. I'll never let them ruin another otherwise gorgeous Sunday. It won't happen.

Email ThisBlogThis!Share to TwitterShare to FacebookShare to Pinterest
Labels: Nostalgia, Sports, The Saints