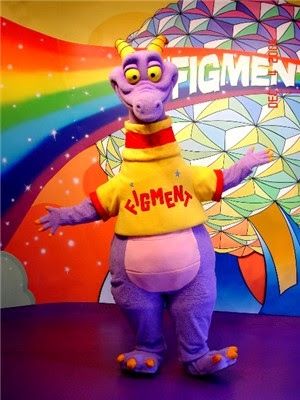 I have no idea why, but Figment has also become the mascot of a few Gay Pride Weekends at Disney World. Seriously. (that's true, by the way).

Of all of the ridiculously nostalgic, overly sentimental choices I've made on this blog-down, this one is so far ahead of all of the others, it really should be called "getting Figmented" when I romanticize something to this degree.

Throughout this experience I've come thisclose to putting "Journey into Imagination" up at least 5 times. The reason I haven't is that really... it's kind of a dumb ride. It's slightly better than El Rio del Tiempo (a ride that I've somehow missed discussing entirely, but could easily have dropped in somewhere along the way for exactly the same reason.) The past version of this ride, when it featured the Dreamfinder, primarily, was incredibly popular. The storyline was that the Dreamfinder created this purple dragon (Figment) and they traveled through places where "imagination" was used. This was the the ride that I knew and loved as a kid. In 1998 Disney changed things up, wholly removing Figment from the ride and basically pissing everyone off in the process.

Disney fans are a fairly vocal group, and they've raised ruckuses before. They went NUTS when Mr. Toad closed. This, however, may be the only time the fans were heeded. It took 4 years, but in 2002, Disney brought back Figment and re-incorporated him into the ride. It's not as good as it once was, though it still features a the song by the Sherman Brothers "One Little Spark", which is pretty fantastic. Still...the ride holds a dear place in my heart, and I effing LOVE Figment. He's hilarious.

So basically I went to write about this ride half a dozen times, but it's not that good, and there's not much to say about it, so I kept putting it off... then I realized about 3 or 4 days ago that it's so much a part of my ultimate Disney experience that not only could I not leave it off, but that it deserved a spot in my Top 7.

It's easily the least attended ride on the list (aside from the People Mover and Carousel of Progress.) I don't know if I've EVER waited more than 5 minutes to ride it. This actually adds to the specialness for me, because it's a guaranteed time-killer and air conditioning surge. It's great.

Basically this ride is so special to me for 1 reason...

It was one of the first rides I rode at Epcot and while it seemed a little "kiddie" even then, there was a charm about it. It also so much embodies all of the beauty of Epcot. Or at the time "E.P.C.O.T." It's a ride about innovation, and imagination, and creativity. It's got a catchy tune and a beloved character. It was probably dated the moment it rolled off, but for some reason it's always captured the... ehem... imagination of the audiences. It's not as good as it once was, but I never feel more permitted to be silly than on that ride. I love it.

Question: What company has sponsored Journey Into Imagination since it's inception?