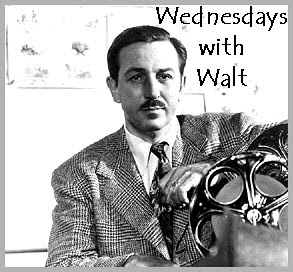 It's another Wednesday with Walt.

Annie asked for another 2 weeks to post her Disney Scandals blog, and since I'm all about not rushing folks, I'm going to pinch-hit with a Disney Blog from the hip.

Walt Disney, I've said many times, was the most influential figure in Entertainment of the 20th Century...possibly ever. Like many of my pronouncements on the subject of Disney, and anything else that I might make a pronouncement about, it's possible to not delve into deeply into the comment, and I'll probably be mostly correct. Though, I usually don't have a lot of examples or reasons behind these things. Usually these comments are based more on feelings or interpretations... This one, however... I have reasons, and those reasons are this blog.

The Biggest Reasons why Walt Disney was the Most Influential Figure in Entertainment in the 20th Century (possibly ever). 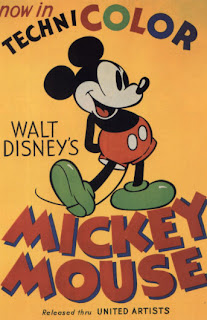 Mickey Mouse.
"Even in China. Children there, next to the Great Wall, who had never seen Mickey Mouse responded." -- John Hench
There are a lot of reasons why the creation of Mickey Mouse is part of the elaborate fabric of my argument. 1) Mickey is the creation of Walts that made every other creation possible. He was the breadwinner. If it hadn't been for Mickey hitting it huge the way he did in the late 20s, there wouldn't have been revenue to do Snow White. Without Snow White, there wouldn't have been the capital to create the new studios. And so on... 2) Walt did the voice of Mickey and thus had an even more specific ownership of him than he did the characters that came before. He protected the image of that mouse (some would argue too much, eventually necessitating the creation of Donald Duck who represented the Id.) I think it's a good thing, though. Walt paid special attention and something special resulted. 3) The arrival of Mickey couldn't have come at a better time for America. America was plunging into the Great Depression and Mickey symbolized, in many ways, Hope. Between him and "Who's Afraid of the Big Bad Wolf", Walt created two of the greatest icons of perseverance in an era when people were desperate to hang on to something. 4) Mickey was arguably the most popular character/most recognizable character on the planet. That's all because of Walt. 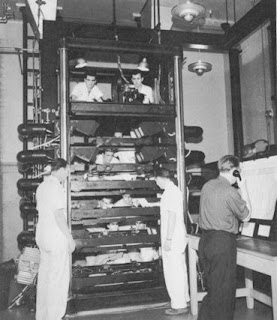 Multi-Plane Camera
As with a couple of the other items on this list, the Multi Plane Camera is an example of an innovation that was carried out by many, but that I give Walt credit for. Here's why, and I apologize for the digression... Thomas Edison had hundreds of people working for him in Menlo Park, but he was the inventor. Walt had hundreds of people at Hyperion or Burbank but he gets the credit because he understood the applications for these advances better than anyone. The multi-plane camera, when left in the hands of lesser people could have no existed at all.... So it's the vision about how to use the innovation that's as important as the innovation itself... (digression over). Anyway, Disney developed the multi-plane camera to help add the illusion of depth to animation. The first famous application was in a short movie (a Silly Symphony) called "The Old Mill". The machine essentially created several layers of depth by stacking glass planes and placing them at varied levels and moving the animated cells at different rates. It's brilliant. It helped create the notion that animation could be more than a diversion, but could instead be art. Without the Mult-plane, we wouldn't have Snow White, The Triplets of Belleville, or Spirited Away. In fact, most hand drawn animation of any quality (relative, of course) probably uses a MP camera itself, or at least the concept. 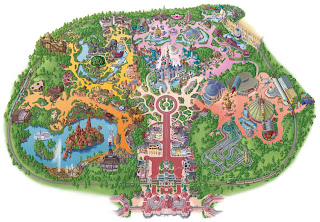 Fully Integrated Theme Parks.
We all are aware of my obsession with Disney World. Well, Disney World is more of a riff on an idea that Walt didn't invent, but definitely started to perfect with Disneyland, which opened in 1955. There are so many innovations to the whole "Amusement Park" concept that I could, and probably should write a whole post just on that. I'll just name a few. 1) The concept of "Amusement Park" itself was fundamentally changed. Prior to Disneyland, Amusement Parks were designed almost entirely for children. They rarely had a connective theme between rides. They often were dirty and seedy. Walt created a park with a cohesive theme. A place that was clean and safe. A place where adults could have fun as well. 2) The Wheel and Spoke design. Walt had noted in a park in Europe how easily visitors could navigate between areas when each area was built around a central hub. He incorporated this in to Disneyland. 3) The very idea of detail-oriented theming was a foreign concept prior to Disney. He wanted to make sure that the vistors were immersed in the experience. He created themed "Lands" and he laid the groundwork for character operated attractions. The best example of this is Haunted Mansion, where the cast members aren't just loading the rides, but are fully in character. It's an awesome thing to see. It's because of Walt that this type of Amusement Park is THE WAY now, and Coney Island has become a relic of nostalgia... a place fun to see for the "way-back-when" feel, but not a destination. Disney Parks occupied the TOP EIGHT spots in attendance in 2007, worldwide.

Sound Sync and Color Processing
This could be such a minor thing, but really it changed everything. Most people think that Steamboat Willie was the first Mickey cartoon, but it wasn't. A silent cartoon called "Plane Crazy" was the first. Why are most people wrong? Because really "Steamboat Willie" gave Mickey his voice, and essentially started a sensation. They did it using a sound syncronization process called Cinephone. Cinephone was already being worked on, so I'm not saying that Walt invented it. What he DID do, was find this process, and contract it out so that Disney Animations would have exclusive rights to the process for 3 years. This was by far the best sound technology in the market at the time, and by having such a long time being the only company allowed to use it, it created a HUGE market share for Mickey and the other animations that followed. He did the same thing with the use of color processing Technicolor. Technicolor was the first 3 strip color sound processing, and Walt had exclusive rights to it for 2 years. This deal was eventually extended to 5 years. Eventually both of these processes would become industry standard, both for Animation (in terms of sound syncronization) and all film in general for Technicolor. 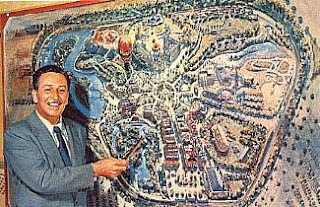 Television as advertising
Walt Disney was the first person to recognize the full power of the "new" medium of Television. In the early 1950s, Walt was doing everything he could to raise money for Disneyland. One of his biggest investors was ABC Television, who was looking to fill their programming schedule. Walt agreed to do a TV special for ABC called One Hour in Wonderland and it was a special promotional program for the upcoming feature animation Alice in Wonderland. The response to this program was so evident in the box office figures for the film, that Walt shortly thereafter created the weekly program, Disneyland. The primary goal for this program was to promote the upcoming opening of the Disneyland Park and then after that new attractions. While this turned out to be an amazing marketing tool, they also created several crazes with the program itself, including the Davey Crockett craze of 1955 where millions of dollars in merchandise was sold. Subsequent programs like The Mickey Mouse Club and The Wonderful World of Color continued to capitalize on their free advertising for new films and new technologies. Essentially creating an infomerical for the Disney company and it's products. This is the greatest marketing coup of the 20th century, as far as I'm concerned.

There are, of course, other people partly responsible for almost all of these things. Ub Iwerks helped develop the Multi-Plane camera, and was in charge of Mickey animation upon his return to the company. Walt didn't create the medium of Television or the color and sound processes. He didn't invent the theme park. The thing Walt Disney did that made him so important is that he had the vision and the inventiveness to incorporate these innovations of others into his work. He had the foresight to understand how to use these advances that were mostly theoretical and implement them in concrete ways that no-one else capitalized on.

And it goes without saying, but this list could be 5 times as long.
Posted by Beefy Muchacho at 11:35 PM

Hey Dan! I have been learning more about Walt Disney lately in my History Of Animation class and he was definitly an interesting figure. Granted he was a racist and he also didnt credit his animators for their amazing workl but the thing that really upset me was that during the strike in 1941?...he hired some mafia hit men to look into the strikers. I found it pathetic. Lately i have been considering how influential he really is. What do you think of Walt Disney as a person?

I don't think he was a GREAT guy as a person, but there's little to no evidence that he was a racist, so I'm not gonna "grant" that without rebuttal.

In fact, most of that assertion has stemmed directly from the strike you mentioned. The primary force against Walt, among the animators was a Jewish animator named Art Babbitt. Walt, rightfully, was upset with Babbitt over things Babbitt said and did. Among those was Babbitt himself perpetuating the rumor that Walt was anti-semetic. There is MUCH evidence to the contrary. There are also rumors stemming from the strike that Walt was a Nazi sympathizer. Again.. much evidence to the contrary, including all of the work that he did for the US government during the war.

As for the "Mafia hit men"... that's probably refering to two of the private detectives he'd hired to investigate Babbitt and another animator Herb Sorrell. They, later in life, were discovered to have mafia connections.

You'll have to comment more on how he didn't give animators credit.