Labor Day and Thanksgiving in one!

So... Monday was Labor Day and for once I didn't have to work, and I didn't have any big plans, so the Tofu Muchacha and I went to a couple of thrift stores (looking for various things, including some decor type props for the show I'm collecting for that opens in a little over a month.

First, let me tell you something about "thrifting"...

I enjoy the occasional jaunt to the local Valley Thrift or St. Vincent De Paul, and I'm told that Mondays, in general are the a good time to go, since there are often sales. Well... Combine a Monday and a day where most people are off work and you have what can only be described as outright fucking lunacy.

Anyway, this day I prepared myself to go thrifting: 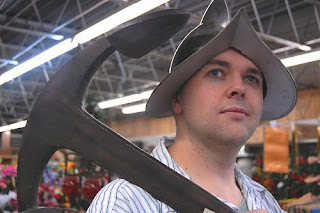 We got there around 10:20 in the AM and not only was there a near-riot in the parking lot to find a space (we ended up eschewing the lot altogether and parking up the street in a residential area), but when we walked in, there was an effing mob scene at the checkouts. It was insane. At least 4 times while we were there (about 45 minutes or so) someone got on the loudspeaker to annouce that such and such a car was illegally parked and that they'd be towed. There was also an announcement that went something like this:

"Will the owner of a silver van, license plate # AH52JS please come to the front. You have been hit."

And then the entire throng....the blood thirsty mass of bargainers...they laughed.

After leaving there (and finding some pretty snazzy silver plated stuff in the process) we grabbed lunch and hit another store.

At some point, the Tofu Muchacha decided that I needed to bake again (as it was Monday). Since it's fun, and I'm certainly not against sweets (I'm no communist!), I agreed. Her only request was that I make a cheesecake. Another thing I'd never made before... I don't know why, but I've been hesitant to try making cheesecake so far, because it always has struck me as being more complicated than regular type baking. I dunno...

So I looked through The Book, and found nothing of particular interest (I KNOW!) and then turned my search to the Food Network website once again. After about 14 seconds, I'd found a highly rated recipe for Pumpkin Cheesecake...By the sexiest Southern gal I know...Paula Deen. I love her.

In my last blog, I stated my reasons for disliking Emeril (despite his food all being so good), so it's only fair that I talk about Paula. Oh..Paula. She's great for all of the same reasons Emeril is getting so, so old.

1) While she's become arguably as famous as the Emeril, she seems to have somehow avoided picking up any bit of pretense.


2) She's unabashed about her cooking style. She's from the South and she likes fatty foods. I was once told that a Southern "health food" was deep friend green beans. She just cooks what she likes and doesn't apologize. I love her for that. I was saw her bake the craziest breakfast casserole anyone's ever seen. I don't recall all of the details, but I know it included large quanities of the following: Ham, Cheddar Cheese, Bananas, Eggs, Potatoes, AND POTATO CHIPS. Baked in a pan.


3) She just seems like she's always having fun. Perhaps because she's drunk, but who cares. She took a bite out of a fucking chunk of butter on live TV.

So anywhoo....we went to the store and picked us up some food type supplies, and got to work immediately on creating another masterpiece.

Here is the mise en place: 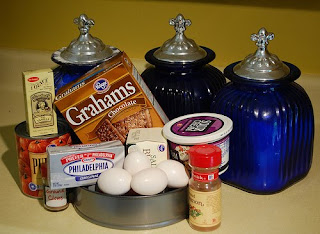 So..the primary change I made in the recipe this time, (because what would a Beefy Muchacho Baking Adventure be without a diversion), was to replace the regular honey graham crackers with chocolate graham crackers. The Tofu Muchacha approved of this decision. In fact, she approved enough to volunteer to make the crust her own self. It was a sight to behold. That's for sure... 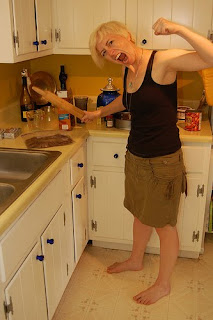 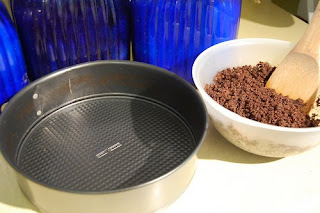 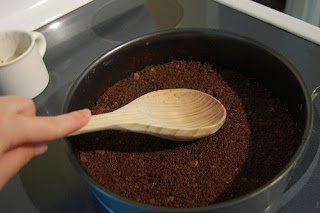 Frankly, I don't see why you wouldn't add chocolate to something, and this is no exception. This is my favorite innovation I've come up with so far.

As for the filling, there's not really much to say... aside from it was waaaaay easier than I expected. Oh...and make sure of 2 things when making cheesecake filling:

1) Make sure that the cream cheese is super, super soft before you start mixing it, or you'll have a hell of a time with the mixer, and... 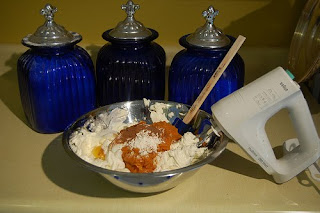 When I saw this mess, I couldn't really picture it ever looking even remotely appetizing. 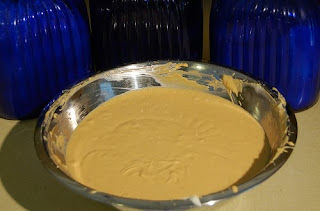 It looks way better now, and it also tasted pretty good raw. I know that sounds gross, and I'm probably dying of some sort of egg-bourne illness and I don't even know it, but it was worth it. I could have eaten it with a spoon. Instead I used my fingers.

2) Make sure that your computer with the recipe is out of splatter range. 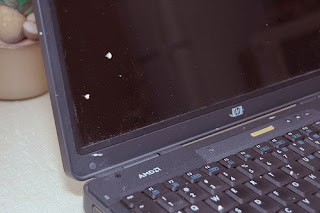 So, if you see above, that's a pretty large bowl of goo, right? I would have never thought, in a million years, that it would all fit nicely into that 9 inch springform pan... but Paula Deen has her shit on lock, and it fit like O.J.'s glove. (Nothing like a nice current reference, huh?) 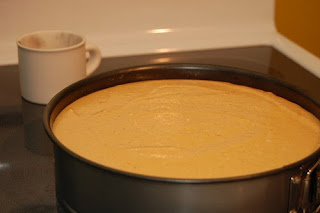 There she is... ready to go in the oven. (at 350 for an hour). It was a pretty moist day outside, so I didn't put any water in the oven with it, hoping that it wouldn't crack. In fact, I didn't even know that cracking was likely. Shows how much I know, right? Because, an hour later I had a veritable canyon of cheese in the oven... 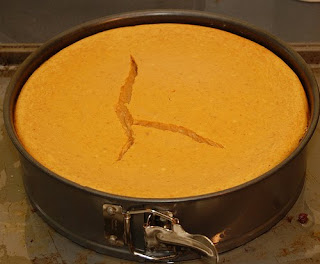 Now how can I possibly serve my co-workers completely free dessert that looks like that? I know they are folks of high standards. So, the Tofu Muchacha came up with the idea of a Chocolate/Sour Cream icing (which, I may end up using again when I make the May-hican Pecan Pie again.)

It's not that interesting, but basically I melted about a 1/3 cup of chocolate chips, 1/3 cup of sour cream and some confectioner sugar (added by the T.M.). It ended up looking a little like this (from melty chips to the top of the cake): 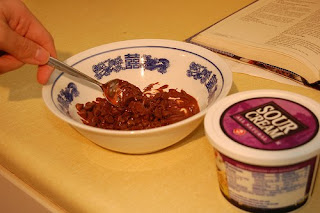 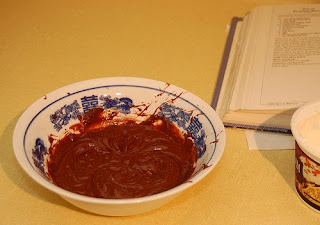 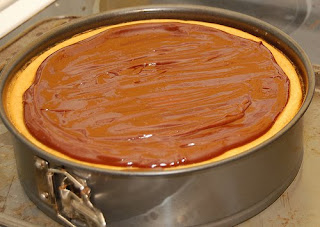 Not bad, eh? I have to say that I am especially pleased with this improvisation. It makes me feel like I should just have that in my back pocket at any time. It's really, really tasty. It's not too heavy. It's simple to make. Yum.

So, we let it cool, and worked on our Romeo and Juliet lines while we waited. I knew we would be pushing it a little bit, but I really wanted to taste it before bed. 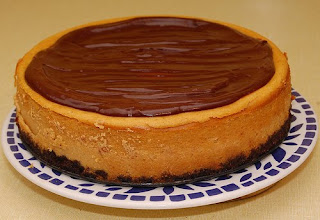 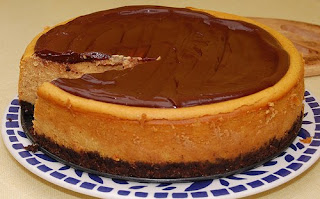 Yep. It was that fucking good. I am most pleased with this one of all of the Beefy Muchacho Baking Adventures.

Here's I detail the successes, the failures, and things I may try the next time...

Successes:
The chocolate additions (crust and icing) were both awesome, and honestly I can't imagine this cake without them. A little plain, I would think.

Failures:
I would have liked for the cake not to crack like the fucking streets of Pompei. I realize that this failure resulted in the greatest triumph of the dish, but still... aesthetically it pissed me off.

Things I may try next time:
I kinda like the idea of maybe a fruit icing... like baked apple or something else Autumn-y. I dunno. It was pretty effing good. I'd definitely plan on a topping from the outset.

The other big "first" of the day came during dinner. I had my surgery in January of 2008 and have not since had a single hamburger or anything like that. Well... Sammy the cat (of the Sammy and Bear conversation) finally catched him a Mo', and brought it into the house, so it seemed a perfect time for the Tofu Muchacha to make those Mole (pronounced Mo-lay for those pretentious people out there)Burgers she'd been wanting to try. 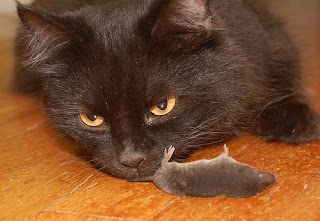 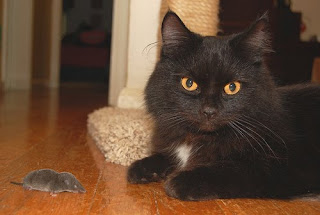 Personally, I was a little nervous about eating a burger, as my stomach is still sensitive to complex proteins, and I would think that Mole meat would be pretty tough (what from all of the digging). All of my fears turned out to be unfounded, because the combination of the special Mexican Mole seasoning (apparently moles are quite a problem down there), which I believe included Chocolate and chilis among other things. The thing went down smoooooth. Seriously. It was my favorite burger I've had in 2 years. It was super tasty, and I felt fine after. Even fine enough to have some cheesecake.

Thanks for leaving out the part about how I cooked those Mole Burgers until they were black little hockey pucks!

Cheesecakes almost always crack...don't count it as a failure.

You might have tried a Bain Marie. It cooks the custard more gently. It does not always work but it's worth a try.

I'm really enjoying the cooking BLogs!!! I would love to try the pumpkin cheesecake.may have to look for the recipe!!