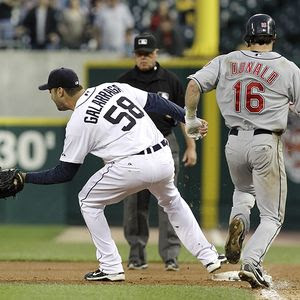 Yup. That's an out.
My buddy Alan and I have often talked about the nature of umpiring in baseball. Alan firmly believes that baseball umpires should be held fully accountable for their terrible calls. I have always agreed. There's this feeling that they're above reproach... They cultivate this by tossing anyone who gives them a sideways glance. I mean... They literally can eject a player for simply arguing balls and strikes. It's completely out of hand.

Umpires make mistakes... In fact, it's always been argued that the "human element" is integral to the game itself. The very fabric of what makes baseball "baseball". This is the argument that has always been made against instant replay. It takes away that human element. Well... you know what I say about that?

Bullshit. It's bullshit. It's always been bullshit, and it will always be bullshit. You can't convince me that a game maintains its integrity by allowing, even implicitly encouraging fuck-ups by the people expressly assigned to make sure the game is played properly.

Until tonight I've felt there was at least room for argument. I'm always up for a debate, and I could always allow for room to be wrong. Like I said... Until tonight.

Tonight, Armando Gallaraga pitched a perfect game. The 21st perfect game in major league baseball history. Let me put that in perspective... Jajor League Baseball is over 110 years old and there have only been 21 perfect games. It's the rarest event in professional sports. It the hardest thing to do. Before this season, there had only been 18 ever. This season there have been 3. That's never happened before, and it's only June 2nd (well.... technically it's June 3rd now, but whatever.)

So, what about that blog title? "My Saddest Baseball Moment". Well... Even though Armando Gallaraga did something that had only been done 20 times before in baseball history, he will not be credited for it. Even though everybody knows and even acknowledges that he pitched a perfect game, the box score shows that he pitched a one-hit shut-out. A truly miraculous thing itself.

Why is the box-score lying? Well, because an umpire badly botched a call that resulted in the last batter of the 27 batters to reach base on what was deemed a hit. So badly did that umpire both the call that he quoted after the game: "It was the biggest call of my career, and I kicked the shit out of it. I just cost that kid a perfect game. I thought he beat the throw. I was convinced he beat the throw, until I saw the replay."

You know how you know a call is a travesty? When the umpire himself admits it.

See for yourself how fucking terrible it was...

Well... You know what isn't civilized? Having the technology and the authority to make the right call, but fucking it up so badly, that this poor guy will forever have to hold on to some spikey little asterisk for the rest of his life. Players after the game were saying things like "I know in my heart I played in a perfect game." and "I'm going to have him sign a ball on the day he threw his perfect game".

Well... he shouldn't have to hold on to the consolation prize of "knowing in his heart". If Bud Selig had a single tiny testicle in his entire shriveled body, he would make an announcement immediately that the call has been overturned, and that Armando Gallaraga has his Perfect Game.

That's the only justice. It makes me sick otherwise. I'm not sure if I'll ever be able to defend baseball again if this isn't made right. I know I'm rambling, and I know I should have gone to bed an hour ago, but I'm captivated by this story. I had to write about the pit I feel in my stomach when I watch his jubilation at achieving something so rare get robbed from him by a mistake.

Everyone makes mistakes. That's true. The thing is... there's nothing that says we absolutely MUST live with those mistakes.

Make it right Baseball. Make it right, or forever be branded a game so out of touch with reality that I'm not sure I will ever be able to feel exactly the same way about the sport I love again.

I'll leave you with the words of Joe Girardi, Manager of the New York Yankees (a team completely uninvolved with this particular game): "I think [overturning the call] is something that baseball should look at possibly because if they do change it, it doesn't affect the game. It doesn't affect the outcome. I know it will be the first time that it's ever happened but you're talking about a very unusual circumstance."
Posted by Beefy Muchacho at 1:13 AM