Something Stinks: An informal poll 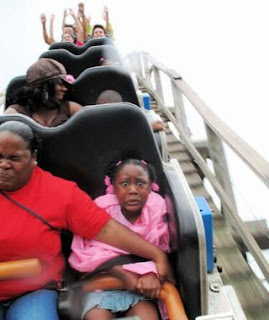 Roller Coasters might do it.
I'm going to stray a little from the usual high brow discourse on American Idol, Disney World, and Baseball for an entry, because I was reminded today of a story I heard a couple of years ago, and I wanted to get your opinion. Warning... Bad language follows.

A friend of mine (we'll call her Smuckers) was a department manager for a fairly large company, and one of her employees (we'll call her Whiskers) was by all accounts terrible in every facet of her job. Especially in the non-work facets... She was constantly late. She had a terrible attitude. She smelled bad. I mean... I'm not tossing stones or anything. I can be cranky at work. I have been late. I get it...

Anyway, one day Whiskers was running especially late for work, so she called up Smuckers and had the following exchange...

Whiskers: I'm gonna be late, because I was almost at work, but now I have to go home.

Whiskers: Well, I shit my pants.

Smuckers: Um... Just get here when you can.

Okay... so, I have a couple of thoughts/questions...

1) I'd almost definitely crash my car so I had a reasonable excuse for actually shitting my pants
2) I'd definitely definitely not call to say I was running late. I'd call to say I wasn't coming in at all and I would never admit to shitting my pants. I would probably consider never coming back... or ever straying more than 2 steps away from a toilet ever again.
3) I'd probably end up burning my car.
4) Most realistically I would make up just about anything to avoid telling the truth that I had, in fact, shit my pants.

B) If you're running late for any other reason, would you EVER lie and say you shit your pants? I'm trying to wrap my mind around what kind of horrible situation I'd have to be in to make the mental leap that whatever I did, shitting my pants is a better outcome.
The possibilities are few. Here are some reasons that I would be more likely to claim to have shit my pants rather than admit:

That's it. Except that doesn't really tell the whole story, because if it's NOT true. If Whiskers DIDN'T shit her pants, I can't think of a single (not one single) truth that requires the lie of "I shit my pants". I mean... What happened to "My kid/cat/plant is sick." or "I accidentally left the oven on/door open/candle burning." or even, dare I say it, "I overslept."?

Does this not strike anyone else as being totally insane? Honestly I can't figure any situation that would require me to ever tell my boss that I shit my pants, whether it's true or not.

As a side note: Whiskers also once volunteered to Smuckers the unsolicited information that she had to go home at lunch because she vomited on herself at her desk.
Posted by Beefy Muchacho at 10:57 PM

This is easily the funniest thing you've written to date, IMHO. More of this please.

What a story! By the way, I went with option A in the poll. While in both cases, Whiskers has used the worst excuse ever (true or not), in the first choice, she has also shit her pants in her car. Ugh.

I had a flashback reading this. When I worked in HR for a large company I once had an employee walk up to my desk & tell me she couldn't report for her shift because she also "shit her pants in the parking lot." I told her to "feel better" and wished her on her way. She then GOT IN LINE FOR HER PAYCHECK at the next department before heading off to the bathroom.

I laughed outloud for a FULL five minutes. I laughed so loud, the cat actually woke up and turned around to look at me. The cat's name is Snickers by the way. Her name fits in well with Smuckers and Whiskers.