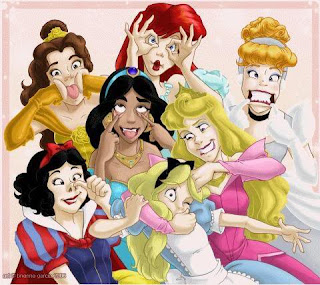 I'm in a bit of a creative lull these days due to work being insanely busy, and much of my personal life being tied up with running from one event to another.

So, after talking to my dawg Nate (of Redheaded Stepchild notoriety), I've decided to do what all good artists do when they've run up against a wall...

I'm going to dive into some things that I find creatively stimulating and talk about them ad nauseum.

In the coming weeks (and likely months) I'm going to start at the beginning of the great Disney Animated Film Catalog and watch each and every one of the feature animated films released by the Disney company. In some cases, it's been years since I watched these movies, and so I'm going to write a new perspective review of each of them.

Also, I read the sequel or, as the pretentious may call it the "companion" novel to/of The Forest of Hands and Teeth. I'll probably be talking about that sooner or later too.
Posted by Beefy Muchacho at 12:36 AM

Ooooo, I'm really excited for your reviews as animated Disney films are all we watch around here. Here is a random shower thought I had for you specifically. I'm sure you've noticed all the Twilight crazyness going on and the many attempts to capitalize on it. What if someone translated the novels into shorthand text? Then you could sell it as an app or something to all those mindless fans. I mean the writing is simple enough, right?

For some reason, the prospect of Twilight being written in teen/Gen-Y shorthand has tickled me all day. That's why it's taken me so long to respond... just too many jokes/possibilities.

Then I started thinking about how I'd like to write an LOLspeak version of Twilight just to see what it would sound like...