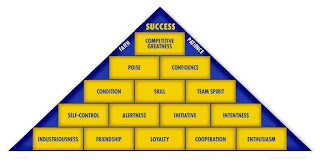 The other day I was getting out of my car, and I smelled something familiar. It wasn't identifiable right away. Even now I couldn't tell you the exact mix of things that created the scent. It was just one of those "outside" smells that you encounter from time to time. Except this one triggered a faint memory. That of stroller rentals and camel ride tickets and the Cincinnati Zoo auto gate.

I worked at the Zoo when I was 16 and 17. I hardly ever think of it, even though it was one of the most pressure-free, fun jobs I've ever had. And yet, yesterday I picked up a faint smell of some bush in some parking lot, and my brain immediately shot back to those days renting strollers and avoiding peacocks.

Senses are amazing things. So are memories.

There are certain smells that trigger more powerful, more specific, memories... Every time I smell a certain type of plastic, my mind immediately jumps to the He Man figures of my childhood. Every time I smell oranges I think of Soarin' at Disney World.

The great John Wooden died last week at the age of 99. When I heard the news, much like with a strangely familiar smell triggering a memory, I immediately thought of my grandpa. The firmness of that association really took me by surprise, but after thinking about it, I realized that once grandpa died in 2004, I had never heard the name John Wooden without also recalling some detail about my grandpa. Almost like his death made that association more intense.

My grandfather, Richard Fraley, wasn't a soft guy. By the time I was eight, I had a healthy wariness for his way. He wasn't easy on me because I was a kid. I'm told that he'd mellowed a great deal by the time I was born. That's kind of hard to imagine. He was the kind of guy who was always teaching a lesson, or giving a lecture. He never felt happier than when charting a lecture on his legal pad, or telling you how to do something better. When you succeeded because of his tutelage, the glee on his face was never more evident. He embraced no role more vigorously than that of "educator".

As a fairly sensitive kid I had a very difficult time with my grandpa. He was tough on me. I learned to relate to him through sports.

We'd found common ground. I wasn't the athlete my uncles were, but I wasn't a slouch either, and I feel like he respected my tenacity. (I'm not sure I'd ever call it tenacity, personally. I'd more call it being fucking pissed that my grandpa was throwing elbows during our basketball game.) It wasn't easy to talk to him about many things, but I would be able to listen to him talk about sports and the people he admired, and it gave us a connection.

There weren't many people who my grandpa viewed as great. Joe Paterno was one. That may have been his Pennsylvania roots poking through, but you never heard a bad thing about Joe Paterno when my grandpa was around. To this day, I root for Penn State. When I think of Joe Paterno, I think of Grandpa.

Oscar Robertson was, as far as my grandpa was concerned, the greatest basketball player who ever played. No matter what I read about Oscar's personality and the surliness and bitterness of Oscar as a person in today's world, I can never fully detach myself from that the exploits my grandpa talked about with such reverence. When I think of Oscar Robertson, I think of Grandpa.

It's amazing, really... What random people and things our mind brings together. After a whole week of hearing about how incredible John Wooden was. How many lives he touched. What amazing integrity he had... All I could think of was how my grandpa had Coach Wooden's Pyramid of Success in the basement of his house.

When I heard about the death of John Wooden, I was sad. I missed my grandpa all over again.

Memories are an amazing thing.

That's an incredible sweet and accurate picture of your grandpa; and you remembering Coach Wooden's pyramid would have brought that smile of glee to his face, even now....

I am so touched that you have these fond memories of your grandfather. I was so afraid that you wouldn't.
G.

A great post Dan. It reminds me how much we share, that memory of Dick the teacher. He was not an easy personality to be sure, and yes, he had Mellowed a lot by the time you arrived, but at the heart of it, he was a person who shared what he knew. And he was generous about that. The Wooden pyramid was posted at the Fenwick, then on our refrigerator, before it landed in the basement.

Just saw this Dano....nice. I miss him too. Ann

Dan,
Dad was very hard on you. He was very hard on all of us he loved the most. I am impressed that you see the best that was part of Dad. I miss him too.
I actually remember him drawing the "ladder of success" on the wall when he was particularly unhappy with somebody's report card. And, why, oh why did every lesson have to be delivered at about 100 dB?
Granpa Al was almost the exact opposite and they BOTH taught us so very much. I miss HIM, too. They knew how to LOVE, in their own ways of course. Love, ykw