2 Days to Disney: Do you have that in "Villain"? 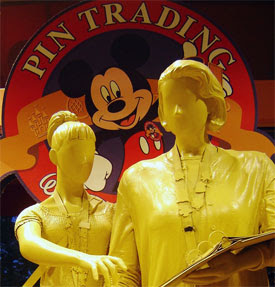 Way back over Christmas in the year 2000, my family spent the holiday at Disney World. It was an overall fantastic trip. I loved pretty much everything about it. The weather was great. I was feeling good. The parks were amazingly decorated. It was awesome. The only shitty thing was how insanely crowded the whole place was.

Probably the most lasting experience from the trip, however, was my discovery of what would eventually become my one true obsession... Disney Lapel Pins.

I know it's confusing to those people who aren't giant Disney fans, but Disney has created a huge number (like in the tens of thousands) of Enameled Lapel Pins, and those bitches are like crack.

The beauty of them, or the evil, depending on where you're coming from is several-fold:

1) They are inexpensive individually. It seems like you're getting off light when you buy 2 pins. They're 8.95 apiece. Not bad for a Disney souvenir. Of course, due to the aforementioned "cracklikeness" of them, it's hard to buy just one or two or ten or twenty. So... they get their money in the end. Don't you worry.

2) They make them for every park, every attraction, every movie, every character. Everything under the Sun. They have an unlimited field of subject matter from which to cull their nifty little trinkets.

3) Because they are so varied, they can basically appeal to just about anyone. Only like Goofy? That's alright, because there are literally thousands of Goofy Pins out there and available. Not just in the parks, but on eBay and to be traded and everything.

4) They are small and easily ported. On my last trip in February I bought... several. and they basically fit in a small bag that I could put in my backpack. They don't even seem to notice them at security at the airport, which is odd since there's enough pointy little barbs in that bag to give the world tetanus.

You see... I'm a magpie. In my life I've collected several things. Autographed baseballs, antique maps, Disney Snowglobes... These are all pricey and large and difficult to amass discreetly. Take one look at the shelves in my bedroom, and you'll see 18 GIANT-ASS SNOWGLOBES. It's cumbersome to say the least. So the pins appeal to me on many levels.

I have several active Pin quests going usually. I'm always on the lookout for good Captain Hook pins. In fact, this may be a bold statement, but I believe I may have the most extensive Captain Hook pin collection anywhere in the world. I know I have several Hook limited edition pins with very small edition sizes.

I also collect Expedition Everest pins and Figment... And Soarin. And a few others.

I've ranked this so high on my list because Disney basically found a way to cater to my 2 favorite things.... Disney and Obsessive Hoarding. Disney has even been so kind as to place kiosks and full-blown shops selling pins and pins alone about ever 40 feet on property. They require cast members to wear pins, and to trade them (without the luxury of haggling) to anyone who wants to trade. It's the best.

Question: What is the name of the Sea Serpent made of legos in Downtown Disney?

Email ThisBlogThis!Share to TwitterShare to FacebookShare to Pinterest
Labels: 30 Days to Disney, Disney, Disney World, I am the coolest, Insane Fads, trivia