6 Days to Disney pt 2: The Should Make a Movie 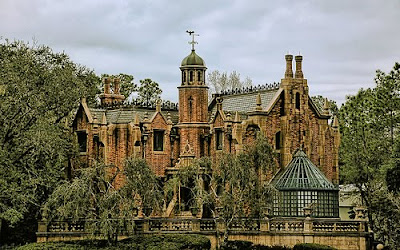 I've had an uncommonly difficult time (for me) coming up with exactly how to write about The Haunted Mansion at Disney World.

The Haunted Mansion is undeniably one of the most iconic and beloved attractions in Disney history. There are versions of it in Disneyland, Disneyland Paris, Disneyland Tokyo and was one of the original E-Ticket rides at Walt Disney World.

It's inspired the most in-depth study in minutia in all of my experiences with Disney, DoomBuggies.com, an entire website dedicated to each and every in and out of the Haunted Mansion, both at Disneyland and Disney World. It's an incredible site. The founders of it also have off-shot into doing TellNoTales.com and Mousetalgia.com, but DoomBuggies is the best.

What makes The Haunted Mansion so special? It combines most of the hallmarks of creativity and imagination that Disney is famous for...

The architecture of each individual Haunted Mansion is different, but appropriate for the area in the Magic Kingdom each is located. The original in Disneyland is fashioned like an old plantation house nestled in the New Orleans square "land". The one in Disney World is designed to fit into the colonial New England setting of the surrounding "Liberty Square".

The details of the ride are insane. From beginning to end, it's one of the most immersive experiences in the park. The ride workers are all dressed as serving staff for the mansion. Their demeanors and their dialogue is letter perfect. I have often dreamed about being the employee based in the "loading area" where everyone walks into the room with no doors and the "servant" says "Please go to the dead center of the room." It's funny every time.

One of the strokes of genius in this ride is the loading system. The attendant takes a set number of people at a time into the room where there is a short scene where the room "stretches" in a pretty incredible effect. At the right moment, the secret door opens and people are ushered into the ride loading area with the moving walkway and into the "Doom Buggies", the special ride vehicles designed by Disney Imagineers. It's all timed perfectly so that the line is always moving and the waits never seem long.

The effects on the ride are also great. There are so many, it would be difficult list them, so I'll just refer you again to DoomBuggies.com and just mention a couple...

The busts in the library that turn and follow you. You think this is simple, that they're just on a pivot, until you realize that each person has the same experience and the things can't face each way at once. Turns out they made the busts in relief, so in fact they are concave. This creates the same illusion of depth, but allows it to seem like the faces are turning.

The face of Madam Leota in crystal ball. It's now a hologram, which makes it even cooler, but it's another that is basically a 3D projection.

I could go on all day about The Haunted Mansion... The music "Grim Grinning Ghosts" features the voice of Thurl Ravencroft, who also famously voiced Tony the Tiger. The dancing ghosts scene in the ball room is great (and done in reflection). It's funny, and a little (tiny) bit scary, and really really cool. The wait is rarely long because of the loading system, and it's a legend. There's really nothing more to say. It's among the first things I think about when I think about Disney World. Can't miss it. Usually ride at least twice.

And now... The (2nd) Disney Trivia Question of the Day

Question: Who is the voice of the "Ghost Host" in the Haunted Mansion at Walt Disney World?

I'll repost the questions with the answers at the end of the contest.
Posted by Beefy Muchacho at 2:00 PM