I'm sure those pictures will be greeeeattt. 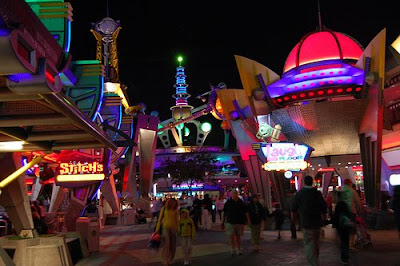 It's my nature to complain, as you've probably discovered. Even in the greatest experiences I'll have things with which I will take issue.

My trip to Disney World was fucking fabulous. Lovely lady at my side, great weather, generally light crowds. It was awesome. That said, I still have shit to bitch about. Allow me to list them.

Here they are, my Top 5 Biggest Complaints about Disney World, October 2009:

Most of these fall under the heading "There are other people here too, Douchebag."

1) Row-Hogs.
There are many, many attractions at Disney that are held in theater type environments. Monsters Inc, Little Mermaid, Mickey's Philharmagic, It's Tough to be a Bug just to name a few. Each and every one of them has been specifically designed to offer great views from every seat in the house. Disney has made a point to make sure that anyone waiting in line on a hot July day in Florida will think the wait was worth it when the show is over. So why... WHY do dozens of jerkfaces insist on stopping at the fucking middle of the row as they enter. They can hear the cast members asking them to move to the end of the row. They can see the throngs of people pushing forward. They force people to step past them and to climb over them or to just not get a seat because they refuse to follow this simple rule of society. They just pretend to not understand English. I'm serious. I'm not being xenophobic here. I've seen this happen. I mean... if you care that fucking much about where you're sitting, don't be the first person in the theater you fucking asshole.

2) Those chains aren't for my special child.
I saw this more on this trip than ever before, but there are loads of people who are willing to send their grubby little children sneaking under the chains or over the hedges or under the ropes in order to score that one precious photo that will show their kid as the gunner on some cannon (Pirates of the Caribbean) or that delightful snapshot of their kid swimming in the shrubs with Nemo or whatever else. I know this is sort of a grumpy-old-man thing to complain about, but that chain is there for a reason. Disney creates these ornate queue lines for more visually interesting waits, not so your gross little offspring can get the one special shot that will finally portray him or her as something other than the satan spawn they are. Plus, it holds up the fucking line.

3) Y'all are just gonna have to wait. Junior's being cute.
Listen... I've taken pictures in a queue line before. There are some amazing things in those lines. But here's the thing. I've never stopped the goddamned line and made people wait while I took that picture. I saw people posing for multiple pictures at a time, blockading the queue line behind them to the point where at least 20 people could fit in the ever growing gap in front of them. It's one thing to take a picture, that happens, but let people pass you if that shot is so effing important. Don't block the whole line and hold everyone else up. Not cool.

2) Don't you hear me honking?
I've noticed this one many times before, but it seemed like it was way worse this time. I know there are some people in wheelchairs that really, actually need to be in wheelchairs. I know there are people who drive those scooters, who unlike George Costanza, really do need them. I have no issue with this. In fact, I have no issue with anyone riding those fuckers around. It looks kinda fun, actually to zip around from ride to ride on one of those things. I'm not here to complain about that. I'm here to complain that those people seem to have forgotten that there are other people trying to get from one place to another. I can recount at least 5 times when either I or the Tofu Muchacha was just walking along, minding our own business, going with the flow of traffic, and suddently we nearly bashed our shins on the back of one of those scooters, whose driver just decided to stop for literally no reason and look around. It was truly insane. The worst part was that after we stopped, regained our balance and stepped around them, they almost always would give these incredibly put-out looks like "How dare you continue walking in the walking area while I mindlessly stop and gaze spacily into the abyss."

1) This ain't Mardi Gras, so quit with the Flashing.
Many of Disney's best rides are called "dark rides". These are rides where visitors ride through on some sort of vehicle through a darkened space and the scenes are specially lit in some manner. They're all over the place. Peter Pan, small world, Snow White, Winnie the Pooh, Haunted Mansion, Pirates, Buzz Lightyear. Those are just the ones in Magic Kingdom. Well... for some dumbass reason, people feel the need to take flash photography on these rides. This is problematic and really fucking retarded. Problematic because it's totally disruptive to just about everyone else on the ride. Usually the dark rides are...you know... dark, so when someone takes a flash photo, it totally fucks with your eyesight. It's completely inconsiderate to the other people who want to enjoy the experience. It's fucking retarded because most of the rides are lit with black light, which is really cool for the purposes of the ride itself, because it allows for even greater darkness and really bright colors, but for flash photography it's... completely pointless. The flash overpowers all of the remaining light, and you end up with the shittiest pictures possible. I hate these people more than anything.

Having been to Disney more times than my bank account would like, I totally agree with your Top 5. The people stopping in the middle of the row is so freaking irritating. It's like that rule applies to everyone but me.

People think they're the only people in the whole world; drives me nuts. The public as a mass is like a giant mass of zombies... Everyone walking in inexplicable directions and randomly stopping to let some brains leak out of their mouths. They walk straight at you with no apparent recognition of your existence. Oh, world.

How was the "Heelie" situation? That's always my big pet peeve, but I think they're finally fading out of style, thank the Cosmos.